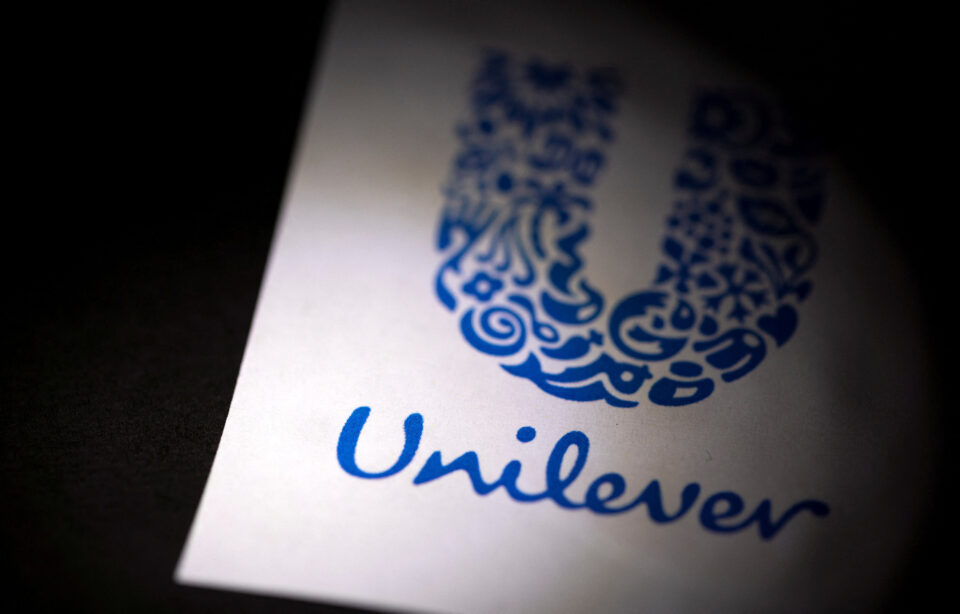 Unilever logo is displayed in this illustration taken on January 17, 2022. REUTERS/Dado Ruvic/Illustration/File Photo

NEW YORK, Oct 24 (Reuters) – Activist investor Nelson Peltz, who is on the board of Unilever Plc (ULVR.L), has approached former CEOs of consumer goods companies as candidates for the top job at the Dove soap-maker, two sources familiar with the matter said.

London-based Unilever is seeking a successor to CEO Alan Jope, who said last month he would retire at the end of 2023.

Along with other consumer goods companies, Unilever has faced a surge in labor, freight and ingredients costs. It has tried preserving margins by hiking the prices it charges for its 400 brands, but has seen them shrink.

Its shares have underperformed European consumer staples and discretionary indices under Jope's tenure, which began in January 2019. It has been scarred by a legal challenge by its top-selling Ben & Jerry's to block the sale of its ice cream business in Israel, as well as by failed attempts to buy GSK plc's GSK.L consumer healthcare business.

Billionaire Peltz in recent weeks met two possible contenders to replace Jope, one of the sources said. Neither candidate formerly led Procter & Gamble Co (PG.N), the Unilever rival where Peltz previously held a seat on the board that he used to prompt a major overhaul, the source added.

Peltz, who co-founded investment firm Trian Partners and joined the Unilever board in July, has also formerly been on the boards of Ritz cracker-maker Mondelez International Inc (MDLZ.O) and ketchup-maker Heinz, now known as Kraft Heinz Co (KHC.O).

Activists such as Peltz are known for reshaping corporate C-suites.

When Jope announced his retirement, Peltz said he was sorry to hear of the decision.

"As a board member, Trian’s CEO Nelson Peltz looks forward to continuing to work closely with Alan until his departure and to being part of the process of choosing a new leader for the company," his firm said in a statement last month.

Trian declined to comment further when asked about Peltz's attempts to find a new CEO.

Even before Jope announced his departure, Peltz met with a former consumer goods CEO in Florida, one of the sources said.

The sources could not be named because they were not permitted to speak to the media.

In the last month, Peltz and his team also approached another former consumer packaged goods CEO about the Unilever job, the source said.

Unilever, which has hired a search firm to find Jope's successor, is also evaluating candidates within its own ranks, the sources said. Fabian Garcia, the president of Unilever's personal care division, is a leading internal contender, four sources familiar with the matter said.

Garcia, who was the CEO of U.S. cosmetics company Revlon until 2018, previously led Unilever's North America division, which has been growing sales.

Chief Financial Officer Graeme Pitkethly and Hanneke Faber, president of Unilever’s nutrition group, are also contenders, one of the sources said. None of the potential candidates could be reached for comment.

In May, Trian said it would work with Unilever's management and board "to help drive Unilever’s strategy, operations, sustainability, and shareholder value for the benefit of all stakeholders."

Some investors have criticized the company for putting profits before more sustainable goals.

RegisterReporting by Jessica DiNapoli in New York and Richa Naidu in London; additional reporting by Svea Herbst-Bayliss in Boston; editing by Barbara Lewis