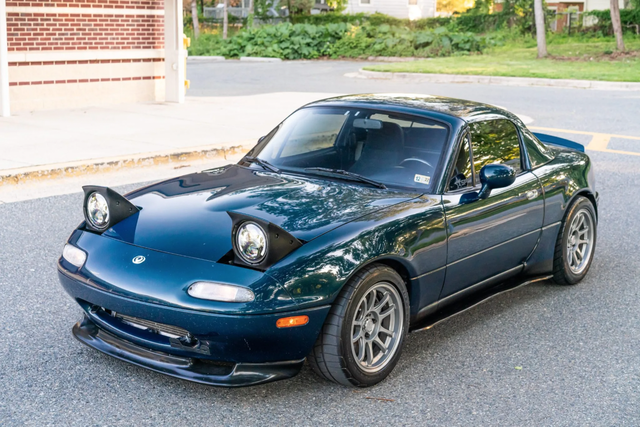 • This 1995 Mazda MX-5 Miata on Bring a Trailer is the recipient of a LS1 engine sourced from a fourth-gen Chevy Camaro.

• The 5.7-liter V-8 has been heavily modified and sounds menacing, as heard in a video of it running (included below).

Ever since the LS1 V-8 debuted in the 1997 Chevy Corvette, people have been stuffing versions of the third-gen small-block into machines that originally had fewer cylinders and much less displacement. One such recipient of the popular LS1 transplant is this 1995 Mazda MX-5 Miata that’s currently up for auction on Bring a Trailer—which, like Car and Driver, is part of Hearst Autos.

The first-generation (a.k.a. NA) Miata offered a naturally aspirated 1.6- and 1.8-liter four-cylinder during its production run that spanned the 1990 through 1997 model years. The bigger engine arrived in 1994. We tested one, and its 128 horses sent the 2330-pound, rear-drive roadster with a five-speed manual to 60 mph in a lackadaisical 8.8 seconds. Not great, Bob! For comparison, the aluminum-block 5.7-liter LS1 rocketed the 1999 Chevy Camaro Z/28 we tested to 60 mph in 5.2 ticks, and that thing probably weighed around 3400 pounds. The donor motor for the BaT Miata is said to be sourced from a fourth-gen Camaro and was rated at between 305–325 horses and 345 pound-feet of torque in stock form. Needless to say, a lightweight Miata plus a LS1 equals endless entertainment—and likely lots of wheelspin.

Unlike the Tremec T56 six-speed manual available on fourth-gen Camaros, this Miata swaps cogs via a Tremec T5 five-speed unit. The gearbox feeds a Ford 8.8-inch IRS rear end with a limited-slip diff that has the difficult job of keeping the 225/45R-17 Hankook Ventus R-S4 summer tires from spinning into oblivion. Interestingly, the front tires are different (225/45R-17 BFGoodrich g-Force Rival S). This Miata rides on a coil-over suspension that pairs with several other chassis modifications including a much-needed brake upgrade, with a set of larger 11-inch front rotors with Wilwood calipers replacing the stock setup. Those will probably come in handy.

While we don’t know exact power figures, based on its myriad modifications, it’s safe to assume the LS1 in this Miata is making more than 305 ponies. The motor is said to have an aftermarket camshaft, forged connecting rods, LS6 cylinder heads, and headers connected to a 2.5-inch exhaust system exiting a center-mounted muffler. As someone who’s owned multiple Chevy small-blocks with custom exhausts, they can make beautiful music, even if it annoys the neighbors and scares their kids. The seller of this Miata wisely uploaded several videos featuring the modded LS1’s pushrod symphony. We included one below of it angrily idling for your viewing pleasure.

Some might say swapping an LS motor into a Miata is blasphemous. That it muddies the easy-to-control, fun-to-drive nature that’s made the tiny sports car so popular for so long. Those people are probably a lot of fun at parties. I’d love to add this demonic Miata to my garage. Hell, I wish I could get my hands on the 525-hp LS3 version by Flyin’ Miata that we tested a few years back. Alas, that’s out of my price range, but this modded ’95 Miata is likely to be more attainable. The auction ends on Tuesday, July 5.

Manhattanhenge Is Happening Tonight — Here’s How to See It