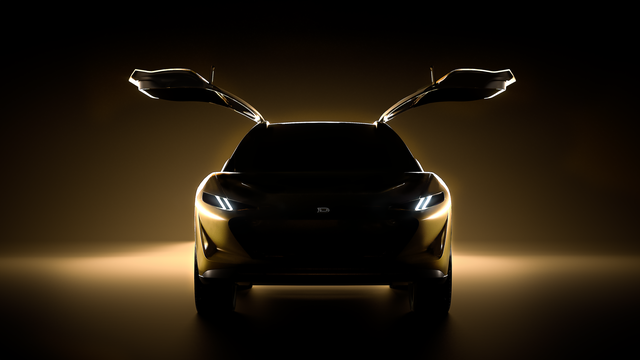 The Drako GTE, unveiled at the 2019 Pebble Beach Concours d’Elegance, is a 1200-horsepower electric supersedan built on the bones of the gorgeous but ill-fated Fisker Karma. Drako Motors, based in San Jose, California, aimed to build just 25 examples of the GTE at a cool $1.3 million starting price. The company claims that it is “in full swing building and delivering GTE to customers and investment partners,” but it is already prepared to announce its next model. The Drako Dragon, teased here in a series of shadowy images, is due for a reveal later this year as the startup expands into the world of super SUVs.

The Dragon will be all-electric, and Drako is making some bold claims about the vehicle’s performance abilities. The top speed is touted at over 200 mph, while the sprint to 60 mph is said to take 1.9 seconds with the quarter-mile supposedly arriving in 9.0 seconds. These mind-blowing numbers will be delivered via a 2000-hp quad-motor setup and an in-house-developed battery. Drako says there will be an adaptive “three-stage” suspension and individual control of each wheel’s torque.

While the engineering work for the Dragon is taking place in Silicon Valley, the design was penned in Italy by Lowie Vermeersch, who previously acted as design director at Pininfarina and styled the GTE. The teaser images are quite revealing, showing gullwing doors, flying buttresses, and a large scoop on the hood. Diagonal LED lines appear in both the headlights and taillights, and the Dragon appears to have curvy bodywork and an athletic stance.

Drako says the interior will be wrapped in “Europe’s finest, most sumptuous leather” and will seat five. Carbon fiber will feature heavily in the Dragon’s construction, and Drako says it will be “priced competitively to the existing super-SUV segment.” Although no competitors were named, we imagine it will target vehicles at or above the $200,000 range including the Lamborghini Urus, Aston Martin DBX 707, and upcoming Ferrari Purosangue. Drako says that reservations will open soon ahead of the reveal later in 2022.