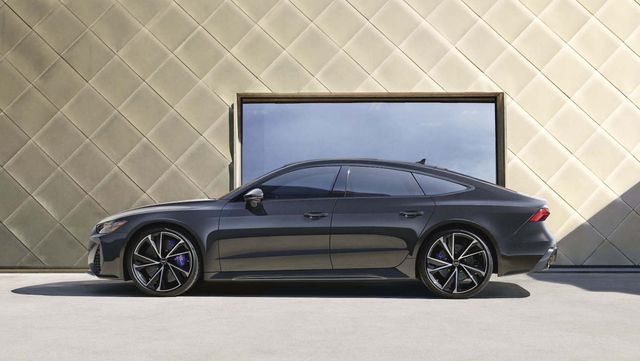 The 2022 Audi RS7 Exclusive Edition will be limited to 23 copies, all of which are earmarked for the U.S. market. That means only 22 other people in America will have a ’22 RS7 like yours, unless, of course, you plan on buying more than one.

What’s so exclusive about this special RS7? Actually, it’s really just unique styling cues. No other 2022 RS7 will have this Mamba Black Pearl paint that combines with the car’s standard-equipped Carbon Optic package to make the thing look seriously sinister. That means every model has blacked-out exterior trim and 22-inch V-spoke wheels mounted on summer rubber.

With every RS7 Exclusive Edition comes virtually every available option. The list of obligatory upgrades includes everything from a powerful Bang & Olufsen sound system and night vision to an air suspension and a sport exhaust. The latter helps provide the soundtrack for the RS7’s 591-hp twin-turbo 4.0-liter V-8, which pairs with an eight-speed transmission and Quattro all-wheel drive. Also included on the Exclusive Edition are carbon-ceramic brakes that feature blue-painted calipers, another RS7 exclusive.

The RS7 Exclusive Edition gets exclusive (there’s that word again) Sepang Blue stitching throughout the cabin. The color traces the diamond pattern on the seats as well as parts of the dash, doors, and other leather-covered surfaces. The floor mats and some of the controls are also accented with blue. This is the only thing inside the car that separates the Exclusive Edition from any other 2022 RS7.

Audi says the RS7 Exclusive Edition will cost $166,495 when it goes on sale later this summer. The regular ’22 RS7 starts at $119,595; adding every option pushes the total price to about $156,000. That begs the question: Are the Exclusive Edition’s exclusives enough to justify its roughly $10K price premium? That’s up to the people who can afford one.