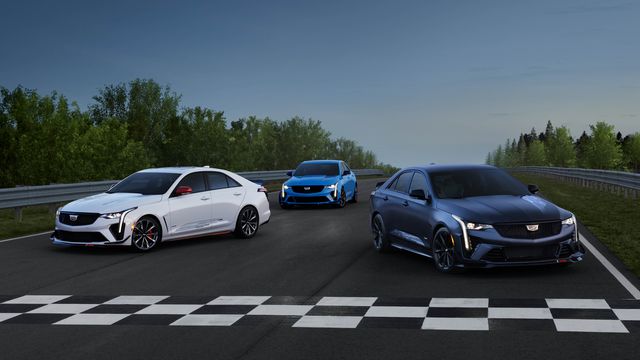 Cadillac recently revealed the Project GTP Hypercar, which will do battle in the IMSA Sportscar Championship starting at next year’s 24 Hours of Daytona, scrapping with a host of new endurance racers from a large field of factory-backed teams. But Cadillac has already been competing and succeeding in IMSA with the Cadillac DPi-V.R since 2017, racking up 28 wins and 84 podiums across multiple entries in 59 races. To celebrate its IMSA achievements, Cadillac is launching the 2023 CT4-V Blackwing Track Edition, with three different versions that each honor a different American road course that is part of the IMSA schedule.

The Sebring IMSA Edition celebrates the Twelve Hours of Sebring in Florida—which Cadillac won in 2021 and 2022—with a dark Maverick Noir Frost paint job, chosen because the race ends in the dead of night. This moody color is paired with Tech Bronze brake calipers and interior accents in either Signet or Sky Cool Gray.

The Watkins Glen IMSA Edition has the same interior trim but is decked out in Electric Blue paint with Royal Blue brakes, calling to mind the light blue guardrails that mark the boundaries of the iconic track. The Road Atlanta IMSA Edition meanwhile features a Rift metallic paint job, said to emulate the “overall elevated environment of Road Atlanta” and “the sophistication of the city.” The interior comes with either Adrenaline Red or Sky Cool Gray accents, and the exterior adds Edge Red brakes, Radiant Red side mirrors, and a red pinstripe along the carbon fiber side skirt.

Along with special colors, the Track Editions add the CT4’s two optional carbon fiber packages as standard, as well as the carbon-fiber front seatbacks. Either the standard six-speed manual transmission or the optional 10-speed automatic gearbox will be available, with manual cars receiving a 3D-printed medallion on the shift knob. Plaques on the B-pillar and the bottom of the steering wheel feature the serial number and verify the authenticity of the Track Edition, and a sill plate recounts Cadillac’s racing triumphs at each circuit. The vehicles also come with an IMSA logo on the front splitter and rear spoiler, a checkered graphic pattern on the hood and doors, and a track outline decal for each track on the rear quarter glass.

Only 99 examples of each Track Edition will be built. Production of the Watkins Glen version will run from October to December, with production of the Sebring edition starting in January of 2023 and the Road Atlanta variant being built from February to March of next year. There’s no word yet on price, but we expect a sizable bump over the standard CT4-V Blackwing, which starts at $60,390.