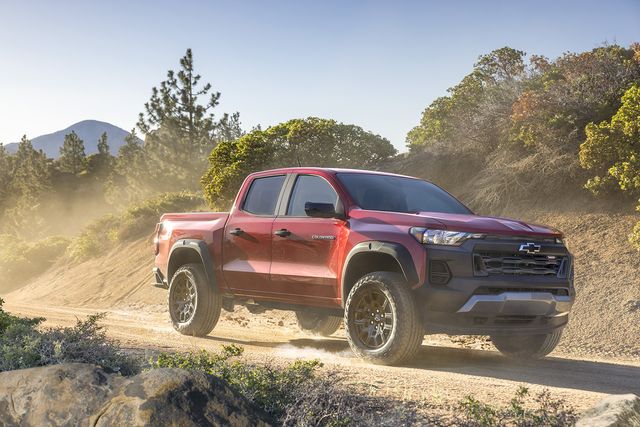 If it were possible to use an Easy-Bake Oven to cook up the perfect mid-size pickup, we’d hope the recipe would include the following fixings: the fun factor from the Jeep Gladiator, the ride and bed-storage tub of the Honda Ridgeline, the distracting good looks of the Toyota Tacoma, and the friendly starting price of the Ford Ranger. A dash of garlic salt wouldn’t hurt, either.

The new 2023 Chevy Colorado is striving to be something like that. This all-new third-gen pickup, which goes into production in the first half of next year, fights to have all the best ingredients, starting with a turbocharged four-cylinder engine that has as much horsepower as the V-6 in Nissan’s new Frontier.

Chevy has streamlined the bulk of its configurability for the 2023 Colorado based on the popularity of the previous-generation truck, offering this new unit exclusively as a four-door crew cab with the shorter five-foot-two-inch box. From base Work Truck (WT) trim up to the dust-busting ZR2 off-roader, Chevy has opted to offer what most people want, even if that means giving some people more than they need by dropping short-cab and long-bed options.

Proportionally, the new Colorado is 2.3 inches wider than the previous pickup. The new Colorado also uses a 3.1-inch-longer wheelbase across all trims, and a shorter front overhang to help improve approach angles. The new ZR2’s 38.3-degree approach is more than an upgrade from the last truck’s 31.8-degree angle; it’s also better than the current Tacoma TRD Pro’s 35.0 degree approach. In this segment, the Gladiator wins this metric with a gnarly 43.6 degrees of approach angle.

Colorado wheels now use the full-size Silverado 1500’s 6.0-by-5.5-inch bolt pattern, which opens up aluminum wheel options from as early as 1999. With bigger hubs come larger brakes. The four-wheel discs on the 2023 Colorado are now over an inch larger up front, and nearly an inch bigger on the solid rear axle. It’s grown 200 to 300 pounds heavier in 4WD configuration, but the biggest increase is for ZR2 models. The last crew-cab ZR2 we tested had the soon-lost 3.6-liter V-6 and weighed 4749 pounds, but the new ZR2 is up in pant size to 5298 pounds, the largest increase we noticed from the specs provided.

The old Colorado and GMC Canyon were once two of just three mid-size pickups to offer a diesel powertrain, but not anymore. The 2023 Colorado will be powered exclusively by Chevy’s turbocharged 2.7-liter inline-four engine bolted to an updated eight-speed automatic transmission. Power varies between trim levels.

Fuel economy ratings of the 2.7-liter have yet to be published by the EPA, but Chevy told us it’s roughly the same as the last-gen 2.5-liter pickup’s 19 city and 25 highway EPA rating. The turbocharged 2.7-liter engines are equipped with stop/start technology and active cylinder management that will drop combustion to just two cylinders when appropriate to save fuel.

Previously offered as a package for LT and Z71 models, Trail Boss is now its own trim level. It uses the same wide front as the ZR2 model, but with a smaller 2.0-inch factory lift for 9.4-inches of ground clearance and 32-inch Goodyear Territory AT tires wrapped around 18-inch wheels. The Z71 uses this same wheel and tire setup, but with a more premium-feeling interior versus the Trail Boss’ rugged cabin. Stepping up to the ZR2 model, things get even more serious.

It gets those pretty gold and blue Multimatic Dynamic Suspension Spool Valve (DSSV) dampers too. This time, the rear dampers are mounted outboard of the frame, rather than inside, which Chevy said was necessary for the new truck’s size and architecture.

The Desert Boss, which is specifically the boss of deserts not trails, adds even more off-road flamboyance to the ZR2 as an additional equipment package. It adds 17-inch beadlock-capable wheels, a special bash-bar front bumper, a roof-mounted light bar, an underbody camera, and decals that show everyone who the Desert Boss really is. It’s unclear yet what happens when two bosses meet in the wild. Maybe they expense lunch.

Standard for the ZR2, and available on other models, is a new tailgate storage system that provides a lockable space 45 inches wide by 4.0 inches deep to store tools, drinks, or your pet rock collection. This tailgate can also lock itself in the midway position, similar to what the Ford Maverick compact pickup does, to help flat-load items (up to 500 pounds) such as sheets of wood or drywall into the bed.

The redesigned interior is another major improvement over the outgoing pickup. Every Colorado comes with a large 11.3-inch infotainment screen with wireless Android Auto and Apple CarPlay connectivity. This is the biggest screen in the smaller truck segment—at least until the upcoming 2023 Ranger goes on sale later this year with an available 12.1-inch screen.

The gear shifter now favors the passenger side of the cab, and the cupholders are located directly low and in front of the center console instead of tucked opposite the gear selector. A new gauge cluster and steering wheel complete the updated design. Dual-zone climate control with rear-seat climate is also available. Chevy will even sell you red or yellow seatbelts for Z71 or ZR2 models, should you need extra interior flair. A sunroof is also part of the available equipment.

The new Colorado also gets an Off-Road Performance Display. The app delivers information about vehicle tire pressure, pitch, roll, g-force, GPS, and altitude depending on drive mode. While the Colorado won’t have a Sport mode, its Tow/Haul, Off-Road, Terrain, and Baja options are tailored for situations where specific throttle control and shifting are required. Among the camera views—there are up to 10 of them—the Colorado’s Hitch Guidance software, now standard, exists to help you line up the hitch on the first try. An additional Hitch View takes that camera a step further, with a zoomed-in view.

Pricing should be announced later this year, and before then we expect to get behind the wheel of one. It will continue to be built by the folks at GM’s Wentzille, Missouri, assembly plant, with the start of production sometime in the first half of 2023.