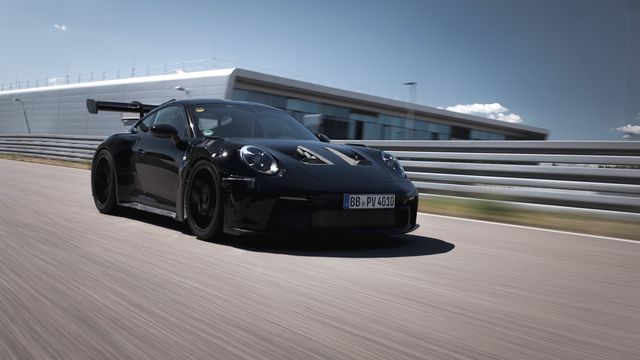 The Porsche 911 GT3 is already a visceral, jaw-droppingly quick track machine. At our annual Lightning Lap competition, the 2022 GT3 made the most of its 502-horsepower 4.0-liter flat-six and sticky Michelin Pilot Sport Cup 2 R tires to set a blistering 2:40.6 lap of Virginia International Raceway, placing it seventh in Lightning Lap history. But Porsche is ready to take the GT3 a step further. Today, Porsche announced that the 2023 911 GT3 RS will be revealed on August 17, heralding the return of the Rennsport name that is only worn by Porsche’s most extreme road-legal track toys.

The teaser image shown at the top—along with previously published spy shots—give a good idea of what to expect from the new GT3 RS. The new track car is said to take inspiration from the 911 RSR and GT3 R race cars, evidenced by its radical new bodywork. Porsche appears to have attacked the sheetmetal with a saw, carving out two huge vents on the hood and slashing air outlets over the front wheels. Tape appears to cover up aerodynamic doodads just ahead of and behind the front wheels, while an enormous rear wing sprouts from the rear of the car.

As with earlier iterations of the GT3 RS, we expect the naturally aspirated 4.0-liter flat six to get a slight bump in power and torque over the GT3; the previous version had an extra 20 hp and 7 pound-feet. The GT3 RS should continue to be rear-wheel drive and will likely come exclusively with the quick-shifting seven-speed PDK automatic transmission. The 2019 GT3 RS set a Lightning Lap time of 2:41.6, over five seconds quicker than a 2018 GT3. Given that the 2022 GT3 already beat the old RS, the new 2023 GT3 RS should be capable of absolutely insane track performance.

How the New 2023 Chevy Colorado Compares with the Toyota Tacoma

Toyota’s Federal EV Tax Credits Are All Dried Up