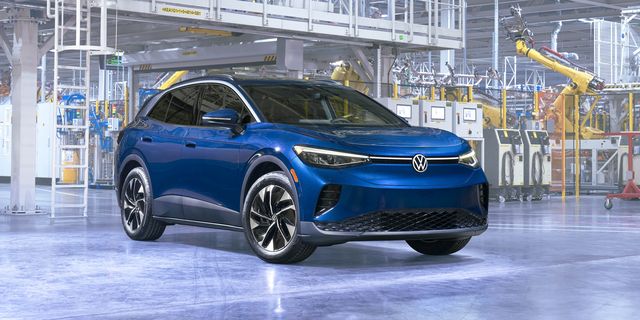 Volkswagen ID.4 models have begun rolling off the assembly line in Chattanooga, Tennessee and will reach dealerships starting in October. The electric SUV first went on sale here for the 2021 model year, but has been imported from VW’s plant in Germany since its launch.

The U.S.-built 2023 ID.4 will also feature a few changes compared with the Europe-built car. VW says that the center console is revised, and that the 77.0-kWh battery will come from a different, U.S.-based supplier, SK Innovation in Georgia. Some interior materials will also be sourced from suppliers in the U.S. There will also be a new entry-level model added by the end of the year that will come with a smaller battery pack, rear-wheel drive, and a lower base price that VW previously estimated at around $35,000. Pricing for the 2023 ID.4 models will be released next week.

Even still, these differences will be subtle, and Tennessee-built ID.4s will likely be found alongside Germany-built models at dealerships as production ramps up. So if you’re shopping for an ID.4 starting in October, when the first U.S.-built cars are estimated to arrive, you’ll have to check the VIN to see where any given car was made.

This Travel Backpack Can Give You a Massage on the Go