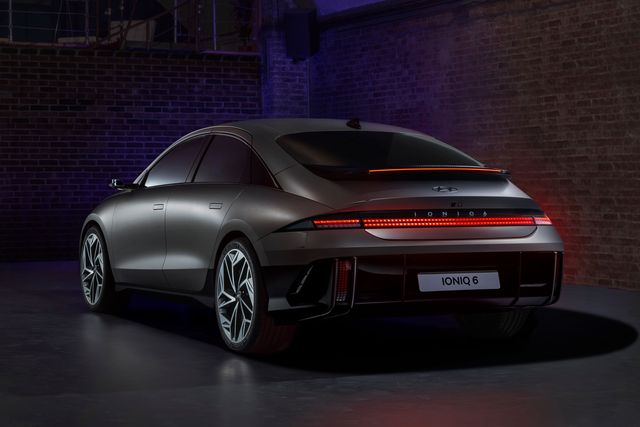 A few years ago, Hyundai foretold its future: sleek and electric, with design cues pulled from classic and modern inspiration. That was the Prophecy concept, first shown in March 2020. As with all augury, there’s room for interpretation. But our first look at the Ioniq 6, the production car based on the concept, reveals a smooth sedan that clearly references both retro and futuristic influences.

The Ioniq 6 follows the Toyota Prius–like Ioniq and the Ioniq 5, an SUV with 8-bit charm. The Ioniq 6 has a lot to live up to, as both the 5 and the Prophecy concept garnered rave reviews. Both the 5 and the 6 ride on the Hyundai E-GMP dedicated electric platform, shared with the Kia EV6 and the Genesis GV60. The Ioniq 6 rides a little higher than the Prophecy concept, a reality of transferring the vision to a production and street-legal platform.

Digital side-view mirrors offer a glimpse of the future, though U.S. regulations mean we

To give the Ioniq 6 a distinctive look, Hyundai designers say they echoed the streamlined cars of the ’30s. Modern influences seem to be Porsche and Tesla; there’s a faint wisp of Taycan and Model 3 in the front end, and the rear spoiler kicks up like a nod to a ducktail Porsche 911. As promised, it’s a mix of classic and contemporary.

Hyundai design chief SangYup Lee shared his thoughts on the pressures, and rewards, of melding brand personality with brand-new technology.

Lee has penned everything from Chevrolet Camaros and Corvettes to the Bentley Continental GT. He began his design career 27 years after leaving South Korea, following an education at the ArtCenter College of Design in Pasadena, California. Fifteen brands and eight countries later, in 2016, he returned to South Korea to head Hyundai and Genesis design. Along with Luc Donckerwolke, chief creative officer of Genesis and Ioniq, Lee draws novel designs with upscale flair to help Hyundai and Genesis stand out in both the mainstream and luxury markets.

The head- and taillights use LEDs. There is also a subtle strip of six bulbs in the front bumper that indicate charge level.

We asked Lee, who’s often overseeing dozens of projects at any given time, how he approaches a Hyundai car as opposed to an upmarket Genesis. Hyundai, he says, views its vehicles like chess pieces. “King, queen, bishop, and knight, they all look different and move differently, but they function as a team,” he says. While a lot of OEMs create a design and then offer it in different sizes like Russian nesting dolls, Lee says Hyundai looks at its customers’ lives: “A big family has different needs than Gen Z.” Lee wants the styling to be distinct, too.

The Ioniq 6 interior is all about glow and flow. With touches like mood lighting and smooth door panels that seamlessly incorporate speakers, it’s a simplified, but not barren, space.

So far, the Ioniq line has achieved the retro-futurist objective it set. The Ioniq 6 feels thoroughly modern and fresh. The interior is uncluttered and elegant. No frilly edges, chrome, or faux chrome. No piano black. Just simple and straightforward. When envisioning the interior, Lee and the team were aware of both the interest in newer tech and the usability of it. “We’re pushing to touchscreens, but they can be dangerous when you’re moving,” he says. “So we want the right balance. In the future, voice activation will play a bigger role, but we’re transitioning right now. If it’s safer, there will be buttons.”

If Hyundai is the mainstream and Genesis the luxury, Ioniq, for now, represents the most daring of the company’s offerings.

The Hyundai team experimented with wheel designs from flat aerodiscs to bladed multispokes.

Good concept cars are exercises in design. They should predict trends in mainstream cars years before they’re evident in consumers’ driveways. The Hyundai Prophecy debuted in 2020, and we can see its smoothed river-rock profile and stippled LED lighting in the Ioniq 6. Sadly, the concept’s plaid interior does not appear to have made it to production, but fortunately, neither did the joystick steering controls. We’re perfectly happy with the Ioniq’s old-fashioned wheel. Not everything foretold comes to pass.