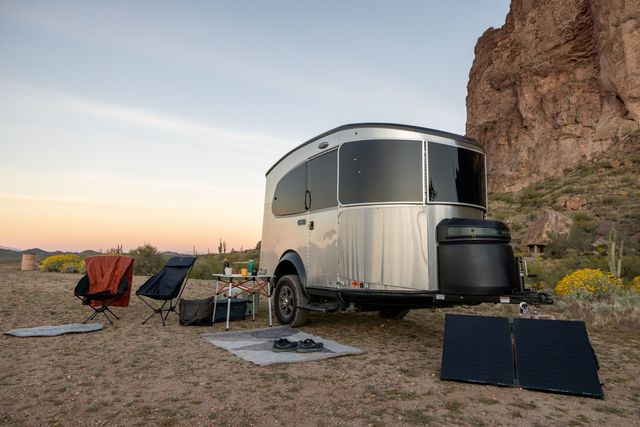 Outdoor specialty retailer REI and Airstream have revealed a distinctively equipped version of the RV manufacturer’s 16-foot Basecamp trailer, complete with enhancements intended to allow users to spend more time off the grid.

The REI Co-Op Special Edition Basecamp model follows a familiar formula for Airstream, by partnering with a luxury retail brand to customize a travel trailer to appeal to that brand’s target customers. Airstream has collaborated with Pottery Barn in the past, as well as clothier Tommy Bahama, and the REI collaboration seems like another natural fit.

A focus on environmental friendliness is evident in the REI Basecamp’s design. The interior’s stain-resistant fabrics are made from post-consumer recycled materials and the trailer’s exposed birch-ply cabinetry is constructed from lightweight, sustainably-sourced wood. REI’s signature New Spruce Green color is used inside and out to give the camper an attractive and, ahem, “on-brand” appearance.

A special recirculating water heater is said to reduce water usage. The system warms the water up before dispensing any from the kitchen faucet or the shower-head, rather than than discharging wasted cold water for a few seconds before the water heats up to temperature. Also onboard is a UV-LED water purification system and Airstream will also swap the trailer’s flush toilet for an optional composting one should you want one.

According to Airstream, the Basecamp trailer is the most aerodynamic model in their lineup, which the company claims helps reduce tow-vehicle fuel consumption on the way to the campsite. The REI Basecamp can be set up with one of two optional Solar packages to provide electricity if that campsite happens to one that’s off the grid. The first Solar package the same 200W bundle that’s available on the regular Basecamp trailer for $2100, but the other is a more robust 360W solar system for $5500 that also includes a 200Ah lithium battery bank to store electricity for use when boondocking.

A host of gear-organizing features have been integrated into the Basecamp’s interior, including a modular floor-track system for securing larger items such as bikes during travel. A 25-piece REI product kit comes with each trailer and includes popular camping items such as camp chairs, a picnic table cover, kitchen utensils, and more. Rather than the traditional laminate found in other Basecamp models, Airstream has swapped in slip-resistant raised-coin style flooring.

Otherwise, the REI Basecamp offers a layout that is similar to the regular 16-foot Basecamp model. A rear-positioned dinette converts to a large bed that can accommodate two adults and a set of wraparound front windows provides a panoramic view of the surrounding scenery. A kitchenette is positioned at the front of the trailer and features a sink with running water as well as a two-burner stove. The REI Basecamp does come standard with the Basecamp’s X package, which normally costs an extra $2700. The package gives the trailer more ground clearance thanks to a three-inch suspension lift, and also includes rock guards, solar window guards, and all-terrain tires.

The base price for the REI Basecamp is set at $55,600 including destination fees (a $6900 premium over the regular Basecamp 16), and the special edition model is available for order now through Airstream dealers. Deliveries are expected to start within the next few weeks, but if you’re an REI Co-op member you’ll also have a chance to win one. Entries for the sweepstakes will be open from August 8 to September 5. If you’re not a member of REI’s co-op program, you’ll need to join before entering to win the trailer, the cost of which is a one-time $30 fee.