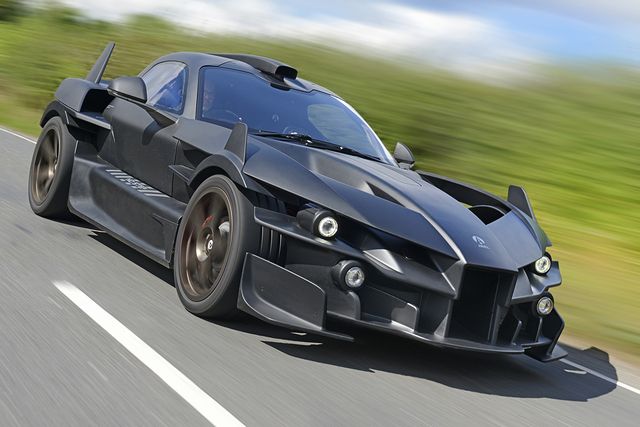 Ariel, a small British carmaker responsible for the iconic Atom and Nomad, revealed its newest car Thursday, simply called the Hipercar. A big departure from the exoskeleton-like vehicles normally associated with the brand, the Hipercar is an all-electric sports car with a real(-ish) interior and body panels. Even crazier than the absurd bodywork is the option for a turbine range extender.

Hipercar isn’t just a clever name. It stands for High Performance Carbon Reduction. The chassis and subframes are aluminum, while the frankly ridiculous body structure—which is expected to go into production unchanged—is made from carbon fiber.

Power comes from a Cosworth-supplied 62.0-kWh battery pack that runs on an 800-volt architecture. Buyers can opt for rear-wheel drive or all-wheel drive, with a 290-hp Equipmake APM electric motor at each wheel. Total output for the all-wheel-drive variant is 1163 horsepower and 1327 pound-feet of torque, while the rear-drive version gets 581 hp and 664 pound-feet.

The most fascinating part of the Hipercar isn’t its weird body, it’s the optional range extender. Instead of opting for a conventional piston engine or even a rotary like Mazda, Ariel decided to use Cosworth’s CatGen turbine engine as a range extender. It makes about 47 hp and turns on to charge the batteries while on the move.

The Hipercar you see here is Ariel’s first production-intent prototype. The company hasn’t said how much the car will cost or when deliveries will begin, though we’re expecting to learn more later in the year.