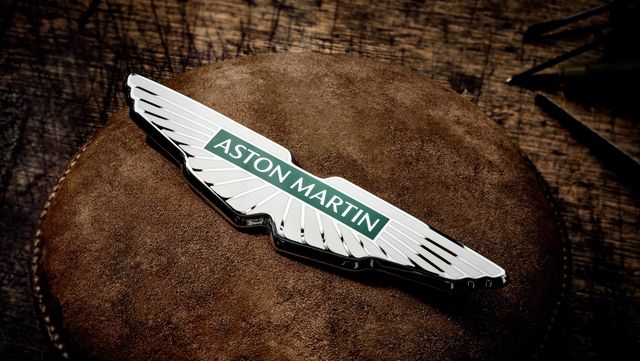 The introduction of an Aston Martin SUV, the DBX, in 2021 was meant to bolster the British sports-car brand’s sales and help the company that has outlived seven bankruptcies avoid an eighth. But DBX sales haven’t exactly taken off, and as of March, Aston Martin had a net debt of nearly $1.2 billion, according to Autocar. Now executive chairman Lawrence Stroll, who led a group of investors to take over the company in 2020, has announced a plan to raise $783 million in capital to pay down that debt and develop new models. And as part of this massive reinvestment, Aston Martin has also given a subtle update to its logo and coined a new tagline.

The logo, which was redesigned in collaboration with British art director and graphic designer Peter Saville, is minimally changed, simply removing the U-shaped line that previously ran beneath the “Aston Martin” text. There are also slight revisions to the font and the thickness of the lines in the wing design. This is the first update to the logo since 2003, and the icon has only been changed eight times in Aston Martin’s 109-year history. The refreshed wings arrive alongside a new motto—”Intensity. Driven.”—and Aston Martin says the new marketing strategy is meant to attract a younger audience.

The new wing design will be seen for the first time this weekend on the Aston Martin AMR22 Formula 1 car at the French Grand Prix. Aston Martin says the revised logo’s first appearance on a road car will be on its “next generation of sports cars,” with updates to the Vantage, DB11, and DBS rumored for 2023.

But more important for Aston Martin’s continued existence than a slightly redrawn logo are the wave of new investments that should give the firm some breathing room when it comes to launching refreshed models and preparing for an electrified future. The reinvestment plan, as first reported by Autocar, includes a $93.5 million deal with the Saudi Public Investment Fund (PIF) for a 16.7 percent stake in the company. Stroll suggested that the PIF’s $1 billion investment in EV startup Lucid Motors could provide a path for Aston Martin’s electrification strategy; the PIF also became a major investor in McLaren earlier this year.

The Saudi backing will be joined by contributions from Stroll’s investment group, Yew Tree, and Mercedes-Benz to raise $401.6 million, and an extra $381.2 million will be raised by issuing more shares. This will drop Yew Tree’s stake from 22 to 18.3 percent, but the group says it will buy an additional $126.4 million worth of shares to boost its stake back up. Similarly, Mercedes-Benz’s portion will fall from 11.7 to 9.7 percent, but the German automaker will reinvest $67.2 million to increase its stake following the rights issue.

Along with the reinvestment plan, Aston Martin confirmed that its first full EV will arrive in 2025 and will likely ride on a Mercedes platform. The British sports-car maker says that it aims to use the new funds to reach 10,000 sales by 2024 or 2025. In the first half of 2022, 2676 Aston Martins found buyers, down from 2901 units in 2021. The company says it expects to sell 6600 cars this year, so a big sales increase will be required for Aston Martin to reach its goals in 2025.