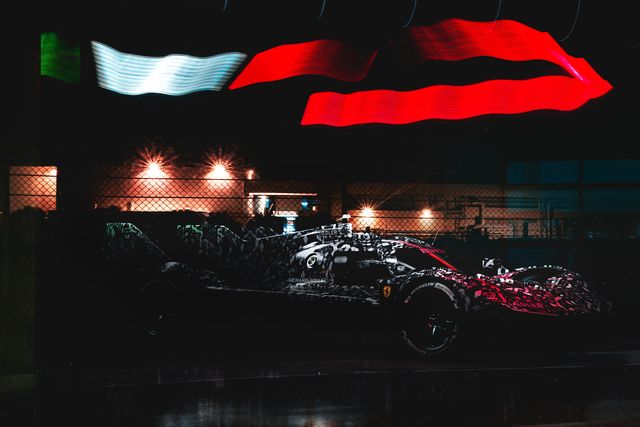 Ferrari is set to make its return to top-flight endurance racing next year, and today, we’re getting our first look at its challenger. The automaker released a teaser photo of the car Wednesday, and images from the car’s first shakedown test at Ferrari’s Fiorano circuit have also surfaced online.

This car is built to Le Mans Hypercar (LMH) regulations, which, unlike LMDh rules, offer a great deal of technical freedom. The chassis will be made in-house by Ferrari, rather than a specified partner, and the car will have an electrified front axle. Based on spy photos, it appears Ferrari is taking a fairly radical approach with the car’s rear aerodynamics. There are three huge fins, one in the center, the others on the sides, and they’re connected by a multi-piece wing that sits a few inches from the top. There also appears to be an additional wing below the fin. Unfortunately, and no doubt by design, you can’t see any of these details in the official Ferrari teaser.

The LMH ruleset is fairly prescriptive with overbody aerodynamics, and it seems Ferrari is taking a similar approach as Peugeot in emphasizing underbody aerodynamics and an unorthodox setup at the rear. (The Peugeot notably has no rear wing whatsoever.)

Unsurprisingly, Ferrari hasn’t yet released any further technical details, though it did confirm to Autosport that factory driver Alessandro Pier Guidi was the one at the wheel today, and the test was just a simple shakedown with the car running a handful of in and out laps. Autosport additionally reports that Ferrari will conduct a more comprehensive test later this month at an outside circuit.

Ferrari will join the aforementioned Peugeot, along with Toyota, Glickenhaus, and possibly privateer ByKolles in fielding LMH cars in next year’s World Endurance Championship. LMH cars will compete next year in the WEC with LMDh cars, with European entrants expected from Cadillac and Porsche. (Acura and BMW only have plans to run the IMSA WeatherTech series for 2023, though BMW should make an appearance at Le Mans.) Joining the LMDh ranks in 2024 are Alpine and, most notably, Ferrari’s longtime rival Lamborghini.

Ferrari hasn’t announced plans to run its LMH car in the U.S., though it has the option to do so starting next year in IMSA’s new GTP class, which is open to both LMH and LMDh cars.