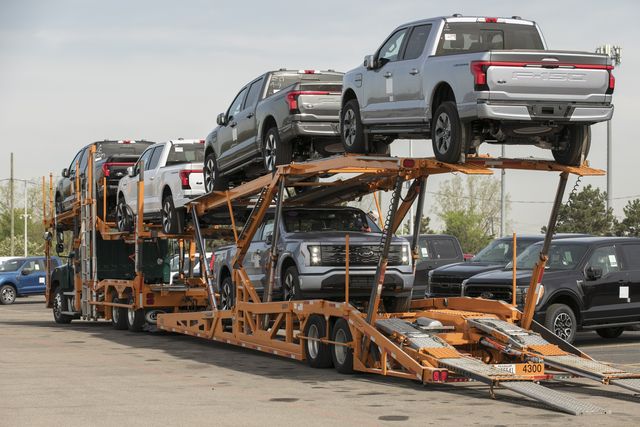 Too many people are taking advantage of the new-car shortage by selling their own just-purchased, highly in-demand vehicles. In many cases, dealers are in on the actions, and affected automakers are not pleased.

Ford’s taken the most heat for these markups, and has also tried multiple times to get its dealers to knock it off. In January, according to Carbuzz, Ford admitted that a “limited number” of dealerships were requiring customers to pay more than the agreed-upon price for the 2022 F-150 Lightning electric truck, even after the order had been placed. The price gouging was “negatively impacting customer satisfaction and damaging to the Ford Motor Company brand and Dealer Body reputation,” Ford said in a letter to dealers. That letter also warned that any dealers caught increasing prices might not get all the Lightnings they and their customers had ordered. Other popular Ford models getting marked up were the Bronco, Bronco Sport, F-150 Raptor, and the Mustang Mach-E. As far back as December 2021, Ford’s Mike Levine suggested customers look for a dealer that won’t pull any fast ones about pricing:

PSA: If you’re ordering a new vehicle, it’s recommended customers agree to a selling price with their dealer when *the order is placed* via a signed purchase agreement. Keep records. If the dealer won’t sign or write a price confirmation, find another dealer.

In February, Ford CEO Jim Farley said during an earnings call that around 10 percent of its dealers were responsible for these extra charges. Farley said the automaker knew which dealers were causing the problems and repeated the threat about future allocations.

Ford said in May that it would implement a stronger name-match policy, requiring a higher percentage of sales to be delivered to the person for whom the dealer originally told Ford had ordered the vehicle. This change was meant to prevent dealers from using a fake name to order a vehicle, then flip it by selling it for more money to another, real customer.

Despite all of these new rules, Ford had to send an even stronger letter to dealers last week. The automaker has now changed the definition of who is considered a broker, and warns that any broker (now, basically, anyone who might be involved with ordering and flipping a popular model) will be punished. A first offense could result in not getting vehicles in a future order at a 1:1 ratio. So, overcharge for a Lightning today and your next Lightning order will be one vehicle short. A second strike means a dealer might not get any more of that model to sell for the current or next model year, Ford said.

Ford isn’t the only automaker dealing with these problems. GM North America president Steve Carlisle sent a letter to dealers in January that warned the “small minority of bad actors” who were price gouging that GM might not send them the vehicles they were allocated in the future. Last week, the automaker escalated its efforts to stop dealers and individuals from reselling their sought-after models. Corvette Blogger reported on a letter to dealers that describes the new tactic is to limit the transfer of some warranties for “certain high-demand models (as identified by GM) if the vehicle is resold within the first 12 months of ownership,” making flipping far less appealing. The list of affected models includes the Corvette Z06, GMC Hummer EV, and Cadillac Escalade V.

Here Are the Most Frequently Stolen Cars and Trucks of 2021