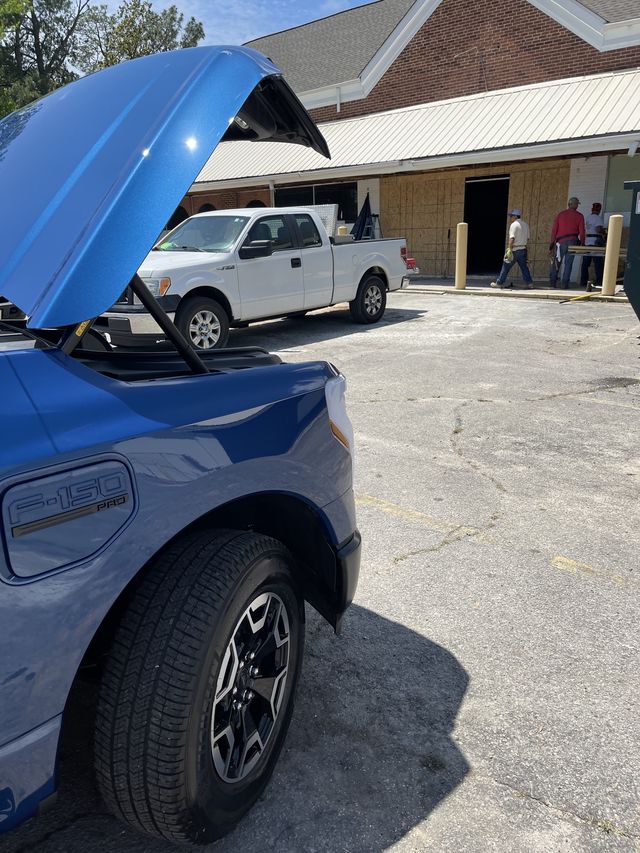 In the Ford F-150 Lightning trim hierarchy, the Pro model is the traditional work truck: vinyl seats, hose-it-out floors, plastic steering wheel. I love it, probably because it’s the Lightning that’s the most conceptually similar to my own wizened Ram, another member of the no-floor-mats club. It’s an honest pickup—and hell, it still has A/C and cruise control, longtime luxuries now taken for granted. And if you’re eyeballing a Lighting of any stripe, I say you want the extended-range model, which brings a higher-capacity battery that boosts the EPA range figure to 320 miles. Even better, the big battery comes with extra horsepower, 580 horses instead of the standard-range truck’s 452. That’s my dream truck, right there: vinyl seats, 580 horsepower, and a $51,769 base price. The only problem is, you can’t get one.

Just a couple of EVs filling up.

I don’t mean that in the sense that you can’t get anything these days, what with the supply chain shenanigans—I mean you can’t order a Lighting Pro extended-range. When you go to the configurator on Ford’s website, the little slider that lets you choose the standard-range or extended-range battery is absent on the Pro. It’s standard-range only. So how did I end up driving an extended-range Pro? Was this a hot rod hacked together by rogue Ford engineers to explore the possibilities of super-quick work trucks? Nope. Ford does build an extended-range Lightning Pro, but it only sells it to fleet customers. No Pro for you. At least, not with the big battery.

The frunk is clutch.

Which is a shame, because an extended-range XLT—the next-cheapest path toward a 580-hp Lightning—costs $74,269. And to save $22,500, I can live without a power seat, a heated steering wheel, and a power tailgate. I know I can live without floor mats. If I legally change my name to Fleet, can I buy one of these?

I didn’t get to test one of Ford’s more hilarious claims for the extended-range Pro—that its battery has “enough power to rip up to 30 miles of half-inch plywood on a single charge”—but I did do some towing. The results of which underscore the fact that towing with an electric truck introduces a lot of guesswork, because trailers vary so much in terms of weight, rolling resistance and aerodynamics. The truck’s unladen range is informed by rigorous testing, but as soon as you plug in a trailer wiring harness, it’s all dead reckoning.

Towing an empty boat trailer is a great way to get guys to say, “Hey, you forgot something!”

My plan was to tow an empty boat trailer (tandem axle, steel, about 1000 pounds) 130 miles or so to the coast, and then return with 3000 pounds of boat aboard. But it turned out I didn’t need to tow the boat, so I just drove around with a thousand pounds of empty trailer. Which bothered the Lightning very little—even with the trailer attached, it could accelerate hard enough to bark its front tires at 25 mph. Off the line, you could definitely surprise the Mustang GT in the next lane. With your work truck. While towing a tandem-axle trailer.

The general rule with EVs and towing is to expect a 50 percent reduction in range, which was reflected in the truck’s range prediction when I plugged in the trailer. But an empty boat trailer doesn’t present much aerodynamic drag, and the truck’s own figures proved pessimistic. Chugging electrons at an indicated rate of 1.8 miles per kWh, I could expect more than 200 miles of range while towing this particular trailer. And in fact, I started with a not-quite-complete charge and towed for more than 170 miles (I took a detour to check out the Megarexx MegaBronc) and still had about 75 miles of range remaining once I detached the trailer. For the local towing that an actual contractor would likely undertake, a Lightning would work fine. Probably even a standard-range one. This truck also had the Max Tow package and thus a 10,000-pound tow rating.

The flip side of that big battery, though, is that standard Level 2 charging takes a long time. Parking the Pro at a public ChargePoint station, the Lightning required 16 hours and 35 minutes to soak up 111.38 kWh. So you can see why consumer Lightnings with the extended-range battery come with Ford’s 80-amp home charger, which, once you get your house wired to accommodate it, can charge nearly three times faster than my ChargePoint. Or course, the Lightning can also handle DC fast charging, but I didn’t test that because around my area, the only DC fast chargers are at Harley-Davidson dealers, for the LiveWires.

But hey, that’s a minor issue for a silent, swift, bargain-priced truck with a power-operated frunk. But, you know—fleet customers only. Which got me wondering about how many trucks constitute a fleet, so I asked Ford. And the answer is five. If you buy five Lightning Pros at once, you’re a fleet customer. Who wants to go in on a Groupon?