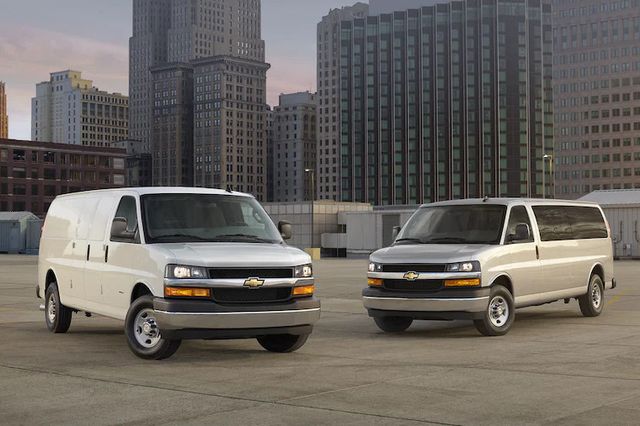 Last of the big-box American-style cargo and passenger vans, the Chevrolet Express and its badge-engineered GMC Savana clone finally will be discontinued after the 2025 model year, with battery-electric vans replacing them in the 2026 model year, according to a competitive analysis source.

Unlike Ford’s new E-Transit battery-electric full-size van, the Express/Savana replacements will be based on GM’s EV-specific “skateboard” chassis and Ultium modular battery pack, and it could be similar in design to the all-electric BrightDrop Zevo 600 commercial fleet delivery van, though very likely quite smaller.

The Zevo 600 has cargo capacity of “more than 600 cubic feet,” while the current Chevy Express/GMC Savana has capacity of 284.4 cubic feet for the long-wheelbase version.

BrightDrop delivered its first 150 Zevo delivery vans to FedEx last week. Unsexy as this part of the EV business is, it’s huge, with perhaps the best potential to quickly get the automotive business out of carbon-spewing internal-combustion engines. FedEx plans to eventually have 2500 BrightDrop vans in its fleet, on the way to an all-electric vehicle fleet by 2040.

The lame-duck GM van twins—their tooling long ago paid off—fall short of Ford and Ram competitors based on much fresher European styling, though the strategy to go directly from 35-year-old designs to EVs might prove smartest. The Chevy/GMC’s basic designs can be traced back to the 1971 model year, with an all-new model for 1997 and its last major update for 2003.

By comparison, the Ford Transit, with three roof height options, has cargo capacity of 246.7-542.2 cubic feet (excluding bare-chassis vans from any of these brands available with larger “cube” cargo boxes that cannot be accessed from the driver’s seat).

The BrightDrop Zevo 600’s range of 250 miles practically doubles the Ford E-Transit’s top-range of 126 miles on low-roof versions. The Zevo 600 can be recharged at the rate of 170 miles an hour using a 120-kilowatt fast charger.

Ford has delivered some 2022 E-Transits and says the average commercial customer drives 74 miles per day. The 2023 model is now available for order, with cargo and cutaway chassis cabs available.

The 2026 BV1 Chevy Express/GMC Savana replacements will add significant volume to GM’s Ultium battery platform—key to easing the cost of the new technology—while the E-Transit is based on the conventional gas-powered Transit van. Ford might not have that disadvantage for long: A dedicated battery-electric Ford E-Transit is expected about the 2027 model year, according to another source in competitive analysis. Stellantis’s Ram is expected to offer a ProMaster EV, also based on the current ICE model, about the 2024 model year.

What about window vans? The 2022 Chevy Express/GMC Savana can be configured for seating of up to 15, but there’s no intel, yet, that the BV1 will be available as a family bus. Another key segment for EV conversion—school buses—proves modern battery chemistry makes high-capacity EV passenger vehicles viable.

The World Resources Institute this month announced it has tracked commitments for 12,000 battery-electric school buses out of the nation’s fleet of about 500,000, largely consisting of 10,000 diesel-to-EV conversions planned for Midwestern schools as part of the organization’s e School Bus 4Kids initiative. It gets a big push from government: Conversions will be funded by the $5-billion clean school bus program included in last year’s $1.2 trillion bipartisan infrastructure bill.