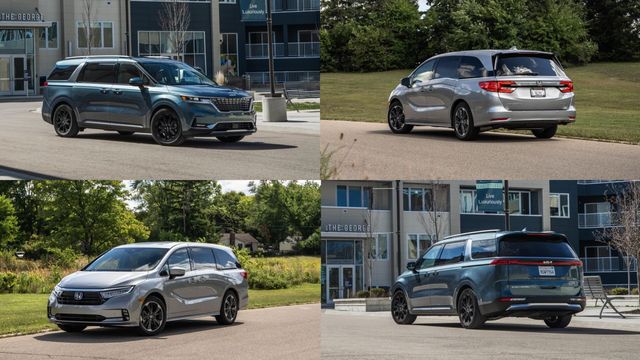 Minivan face-offs might sound as exciting as making toast, but the 2023 Kia Carnival and the 2023 Honda Odyssey are formidable foes that each offer slightly different takes on a tried-and-true formula. The Carnival replaced the Sedona in the Kia lineup last year, ushering in a new generation with SUV-inspired styling and innovative features. The current-gen Odyssey debuted several years ago and has since received a facelift and added meaningful features. For 2023, not a lot changes for either minivan, but we’re comparing the two so folks can decide which model is a better fit.

The most important part of a minivan is inside. How flexible are the seats? Can you fit an entire family’s worth of luggage in it? These are the things that minivan buyers want to know, and the Carnival and Odyssey have different answers to the same questions.

The more people a minivan can hold, the more useful it is as a shuttle. Both the Carnival and Odyssey can seat up to eight. Their third rows also fold flat into the floor, but it’s the configurability of their second-row seats that set them apart. The Honda’s second row features a three-seat bench that includes a removable middle seat. Once it’s gone, the outboard seats can slide fore and aft or side to side or be removed entirely for maximum space, but they’re bulky. The Kia comes standard with removable captain’s chairs, and a removable three-seat setup with a middle seat that independently slides fore and aft is also available. The top-of-the-line Carnival SX Prestige offers an option for recliner-style “VIP Seats” that have heated and ventilated cushions and a power-operated ottoman. Unfortunately, these ritzy thrones have unwieldy adjustments and can’t be removed.

The Kia and Honda minivans both offer rear-seat entertainment systems. The former has two separate screens mounted on the front seats and the latter uses a single screen that drops down from the ceiling. While both offer a subscription-based Wi-Fi hotspot, this feature is standard on the Carnival but only comes on the Odyssey’s top two trim levels. Likewise, both minivans offer an in-cabin intercom system that transmits the driver’s voice to rear passengers as well as a camera view of the rear seats, but, again, those features only come on the Honda’s top two trims, whereas they’re available at a lower price point on the Kia.

The Carnival and Odyssey each have a host of standard driver-assistance technology that includes automated emergency braking, automatic high-beam headlights, a blind-spot monitor, rear cross-traffic alert, and lane-keeping assist. Both also offer adaptive cruise control, but it’s only standard on the Honda. Oddly, the Odyssey isn’t available with a 360-degree, surround-view camera.

While minivans such as the Toyota Sienna and Chrysler Pacifica offer hybrid and all-wheel-drive options, the Carnival and Odyssey’s powertrains lineups are simpler. Both feature a naturally aspirated V-6 engine and front-wheel drive. The Kia’s 290-hp 3.5-liter is slightly more powerful than the Honda’s 280-hp 3.5-liter, and they make an identical 262 pound-feet of torque. The Carnival’s eight-speed automatic transmission also has two fewer gears than the Odyssey’s 10-speed automatic.

Despite the horsepower advantage, a 2022 Carnival was notably slower than a 2021 Odyssey in our acceleration tests. The Kia isn’t a slowpoke, though, it’s just that the Honda is surprisingly quick, hitting 60 mph in 6.5 seconds. That’s 0.5 second quicker than the Carnival, and that gap grows to 0.7 second when accelerating from 5 to 60 mph, which is more indicative of real-world driving. The Honda is also punchier when simulating a passing maneuver on the highway, going from 50 to 70 mph in 4.5 seconds versus the Kia’s 5.0-second result.

Minivan owners are likely to be more concerned with fuel economy than how quickly they can race between stop lights—unless they’re running late for soccer practice or band recital, of course. Still, when it comes to pinching pennies at the fuel pump, the Honda has the advantage based on its EPA ratings as well as its real-world highway result.

The Odyssey is rated at 19 mpg in the city and 28 mpg on the highway, with a combined rating of 22 mpg. The Carnival has the same combined and city estimates, but its 26-mpg highway rating falls short of its rival. We put each minivan through our 75-mph real-world highway fuel-economy test. Both exceeded their EPA highway ratings, as the Honda achieved 30 mpg and the Kia achieved 28 mpg.

The 2023 Kia Carnival has a cheaper entry point than the 2023 Honda Odyssey. The Carnival’s LX base model starts at $33,935, and the Odyssey’s entry-level EX model starts at $38,635. That’s a possible $4700 savings for budget-minded families, and it’s not like the cheapest Kia minivan is stripped of desirable features. It comes well equipped.

The Carnival lineup maintains a price gap between about $2700 and $3700 across the board compared with Honda’s minivan trim levels. The $39,435 Carnival EX is $2270 less than the equivalent Odyssey EX-L, which starts at $41,705. For 2023, the Odyssey adds a new Sport trim level ($42,505), but don’t let its name fool you as it mostly just adds blacked-out exterior pieces and red-accented interior bits. Honda also now provides two years or 24,000 miles of complimentary scheduled maintenance. That’s something Kia owners will go without.

The $42,635 Carnival SX and the $45,745 Odyssey Touring represent the penultimate models in their respective lineups. However, the SX has a stronger roster of standard features (ventilated front seats, wireless phone charging, etc.) for less coin. The SX Prestige ($47,035) brings its neat VIP lounge seats, which for 2023 can be swapped at no cost for the standard second-row bench. The Odyssey Elite has all the best features and tech, but we don’t think it’s as inspiring as its ritziest rival. Not only that, but at $50,765, it costs $3760 more than the Carnival. Perhaps Kia should’ve called its minivan the Carnivalue.