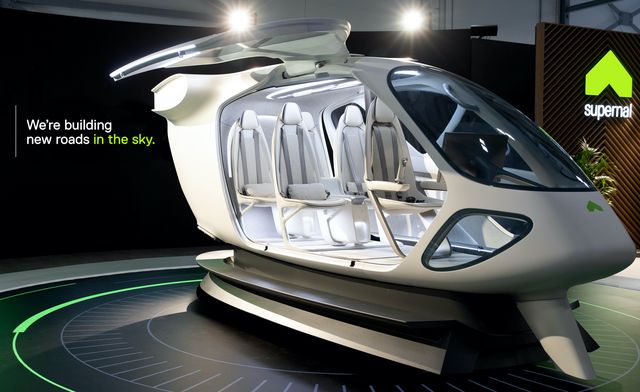 Flying cars have been touted as the future of transportation for decades, and while a plethora of companies have claimed to crack the code, their efforts have never amounted to more than a few working prototypes. The race to solve the flying car conundrum has only heated up in recent years, with independent startups like Terrafugia and PAL-V facing new competition from transportation giants like Uber and Airbus.

Hyundai is also investing heavily in the nascent industry, launching a U.S.-based subsidiary called Supernal last November to focus on the so-called “Advanced Air Mobility market.” Now, Supernal has unveiled its eVTOL Vehicle Cabin concept at the Farnborough International Airshow in England, showing what the passenger compartment inside its upcoming intra-city air shuttle could look like.

Supernal worked with Hyundai’s studios to draw inspiration from automotive design for the creation of its eVTOL cabin concept. The pod seats five, and the lightweight structure is constructed from forged carbon fiber. Each “ergonomically contoured” seat features a deployable control center designed after the center consoles found in cars.

Each passenger has a charging port and a small storage compartment. The overhead lights mimic a car’s sunroof, and the lighting adjusts during different phases of the flight. Getting in and out of the eVTOL is made easier by grab handles on the vehicle’s doors and seatbacks. Supernal also touts the eVTOL concept’s sustainable construction, with includes interior materials such as recyclable carbon fiber, reinforced thermoplastic, plant-based leather, and recycled plastic fabric.

Supernal says it is in the process of certifying the eVTOL for commercial use in the United States starting in 2028, with plans to launch the flying vehicle in Europe soon thereafter. Supernal’s eVTOL will be just one electric air vehicle in a family planned under the Hyundai umbrella. Hyundai’s Korean division is currently in the process of creating a hydrogen-powered, mid-sized flying vehicle for inter-city cargo and passenger shuttle services. However, it doesn’t expect to launch that until the 2030s.

While Hyundai certainly has more resources than many of the startups that have tried to make the flying car a reality, we won’t be holding our breath.