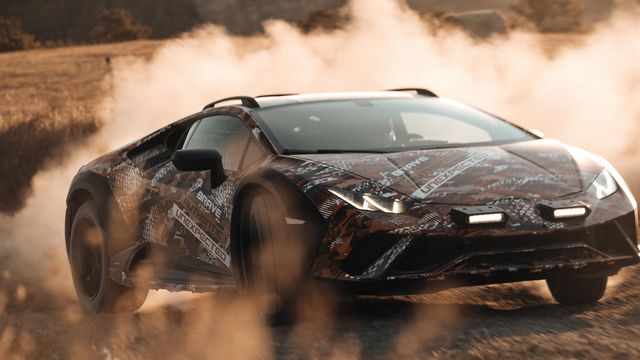 At the start of the year, Lamborghini boss Stephan Winkelmann revealed that 2022 would bring two new variants of the V-10–powered Huracán supercar. The first, called Tecnica, appeared in April, packing the same rear-wheel-drive, 631-hp powertrain found in the track-focused Huracán STO but with less extreme aerodynamic components. Now Lamborghini has confirmed the identity of the second new Huracán model, releasing a video that teases the impending arrival of the off-road-oriented Sterrato.

Lamborghini first hinted that it was interested in turning its 200-mph wedge into a rally machine in 2019 when it showed the Sterrato concept. At the time, the Sterrato was simply referred to as a one-off concept, but the new video showing a camouflaged prototype tearing up a dirt road indicates that the Sterrato will reach production.

There are a few noticeable differences between the concept and the test vehicle that stars in the teaser video. The production version still wears a pair of rectangular LED rally lights atop the front bumper, but the third LED light bar mounted to the roof rails has been removed—although the presence of the roof rails will allow owners to install their own aftermarket auxiliary lights. The production car appears to feature similar black plastic cladding around the wheels as the concept, as well as the same slatted engine cover, but there also appears to be an air intake emerging from the engine bay.

The teaser did not include a reveal date, but the Sterrato is expected to arrive before the end of 2022. No technical specifications are known at the moment, but the Sterrato will presumably feature all-wheel drive and the same 631-hp version of the 5.2-liter V-10 found in other AWD Huracán models.

Ariel Reveals Hipercar With 1160 HP and a Turbine Range Extender