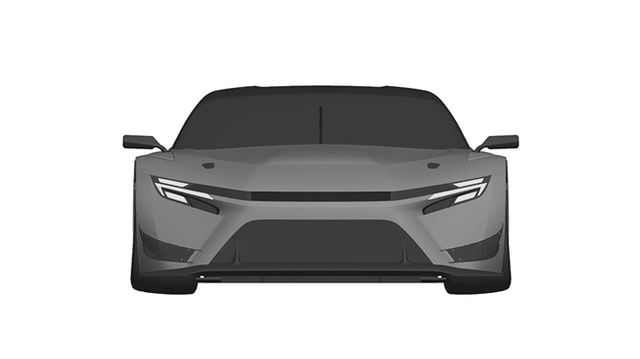 Toyota has been on a performance-car tear recently. The legendary Supra nameplate was revived in 2020 and for 2023 will add a six-speed manual, a second generation of the affordable GR86 coupe arrived for 2022, and the even the humdrum Corolla hatchback earned a 300-horsepower GR performance trim. But it appears Toyota still has more up its sleeve when it comes to sports cars, with a recent patent filing in Europe revealing what could be a production version of the wild GR GT3 concept shown earlier this year at the Tokyo Auto Salon.

The images, submitted to the European Union Intellectual Property Office, show a design largely similar to that of the concept from January. There is one glaring omission, however: the colossal rear wing. Instead, the car in the patent images makes do with the small spoiler behind the rear windshield, where the wing had been mounted on the concept. Still, the GR GT3 retains aggressive dive planes on the front bumper, a side-mounted exhaust pipe, an expansive rear diffuser, and the long-hood proportions.

When the GR GT3 concept was unveiled, Toyota neglected to provide details about the powertrain but did say that a running prototype would arrive before the end of 2022. Later, in an interview with Toyota Racing Development president David Wilson at the Daytona 500, we learned that the GR GT3 concept could provide the basis for a future Lexus GT3 race car, with Wilson hinting that “it’s fairly safe to connect the dots.”

It’s unclear if the GR GT3 will spawn a roadgoing variant, and whether it will be badged as a Toyota or as the next Lexus RC, but the patent images certainly prove that Toyota is intent on expanding its sports-car armada. Wilson told us that the race car would likely arrive in the next couple of years, so it shouldn’t be long before we find out what the company is planning for this dramatically styled coupe.