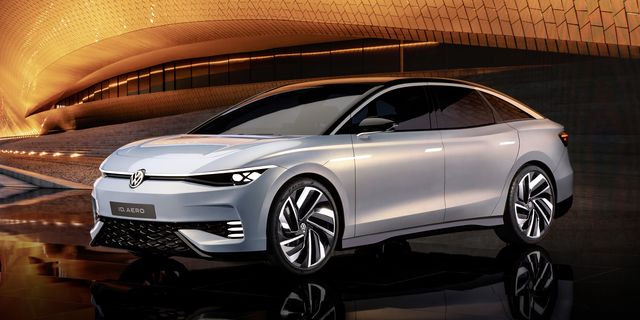 Volkswagen kicked off its ID family of electric vehicles with the most mainstream of bodystyles—the ID.4 compact SUV—and then went a little wild with the funky, retro ID.Buzz minivan. Now it’s reining things back in with another familiar-looking silhouette: the ID.Aero mid-size sedan. Though shown as a concept car here, a production model is coming soon that’s based on the same MEB platform as those other vehicles.

The ID.Aero name emphasizes its aerodynamic qualities, and indeed, Volkswagen claims that the sedan has a drag coefficient of 0.23. That’s not quite as good as the Mercedes-Benz EQS’ claimed 0.20, but plenty slippery nonetheless. This should help its range compared with the taller ID.4, which is EPA-rated at up to 275 miles of range. Volkswagen says that the ID.Aero and its 77.0-kWh battery pack will provide a driving range of 385 miles on the more lenient WLTP cycle, and we think it will crest the 300-mile mark on the tougher U.S. EPA cycle.

At around 190 inches long, the ID.Aero is about the size of the outgoing mid-size Passat sedan. Its design largely mimics its SUV sibling’s, with similar-looking headlights and taillights, chrome trim around the roofline, a black roof, and familiar side surfacing. The touch-sensitive door handles and large 22-inch wheels may not make it to production, but we think the final product won’t change too much compared with this concept. There aren’t any photos of the interior available yet.

VW says that this sedan will be its electric flagship model, and that it will be sold in Europe, China, and North America. When it arrives in the U.S., it’ll compete with models such as the Tesla Model 3, Hyundai Ioniq 6, and Polestar 2. Look for the production version of the ID.Aero to debut sometime next year.

1967 Volkswagen Beetle Is Our Bring a Trailer Auction Pick