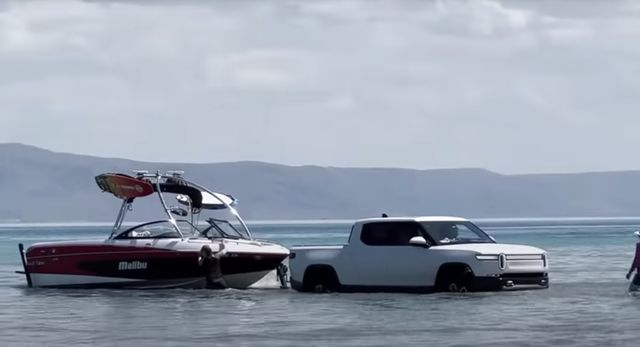 The Rivian R1T is one of the most exciting electric cars on sale today. One owner decided to push the boundaries of that excitement by driving their EV right into Bear Lake in Idaho in order to launch their boat.

The owner of this particular Rivian R1T is youtuber Rivvit . blog, who uploaded a video of the aquatic adventure alongside a description of the events. According to the owner, this idea of driving their Rivian into Bear Lake was a goal of theirs since they pre-ordered the EV back in February of 2020. Bear Lake is located right on the border of Idaho and Utah, with half of the freshwater lake belonging to either state. There are only a handful of public boat launches surrounding the lake, which are reportedly often jammed up with traffic. Boaters can launch directly off the beach if their vehicle is capable of surviving the plunge, with the video description noting that many locals utilize heavily modified vehicles to skip the lines.

Thanks to a few key factors, this R1T owner felt his truck could take on the challenging launch in stock form. Firstly, the beach surrounding the lake itself is composed of a relatively compacted sand, which the truck doesn’t seem to displace much of while on land or in the water. Secondly, the beach also gradually falls off after you’ve entered the drink, creating somewhat of a natural boat launch beneath the surface. Combine those factors with the fact the Rivian is capable of fording through over 43-inches of water, and things seemed relatively straightforward to this boating family.

Before the attempt began, the owner disconnected the truck’s trailer lights and engaged the Rivian’s Deep Sand drive mode. As the video starts, we watch as the R1T silently drives nose first into Bear Lake. The truck then manages to flip around, positioning the boat trailer for the most effective launch.

The boat in question is a 2004 Malibu 23 LSV, which requires around 36 inches of water to float off the trailer. Once the boat is operating as intended, the truck simply pulls back out of the lake without any trouble. It’s a wild scene to behold, and not exactly the sort of ending we’re used to seeing when heavy trucks take on the beach. That said, the owner of this truck repeated this process several more times over the course of their visit to Bear Lake. The process reportedly only got easier to handle, though we have to imagine there was always some anxiety involved. That’s especially true when it came time to load up at the end of the day.

Rivian likely didn’t test the R1T’s abilities as a standalone boat launch, but we’re glad to see some owners embracing the outdoorsy image the brand has crafted for itself. I wouldn’t suggest trying something like this without some real knowledge of your local beaches and their rules, but I can’t imagine this is the last aquatic Rivian we’ll encounter.

You Can Now Take a Seaplane From NYC to Washington, D.C. — Here’s How