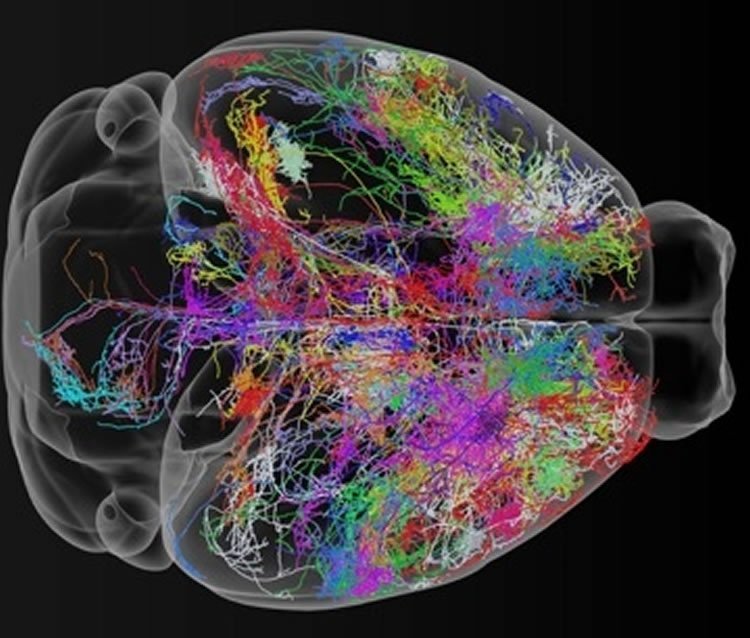 Summary: A new brain wiring map reconstructs the entire shape and position of more than 300 neurons in the mouse brain.

Scientists can see and explore these wandering neural traces in 3-D, in the most extensive map of mouse brain wiring yet attempted. The map – the result of an ongoing effort by an eclectic team of researchers at the Janelia Research Campus – reconstructs the entire shape and position of more than 300 of the roughly 70 million neurons in the mouse brain. Previous efforts to trace the path of individual neurons had topped out in the dozens.

“Three hundred neurons is just the start,” says neuroscientist Jayaram Chandrashekar, who leads the Janelia project team, called MouseLight for its efforts illuminating the circuitry of the mouse brain. He and colleagues expect to trace hundreds more neurons in the coming months – and they’re sharing all the data with the neuroscience community.

The team released their current dataset and an analysis tool, called the MouseLight NeuronBrowser, on October 27, 2017, and will report the work in November at the annual Society for Neuroscience meeting in Washington, D.C. They hope that the findings will help scientists ask, and begin to answer, questions about how neurons are organized, and how information flows through the brain.

“MouseLight’s new dataset is the largest of its kind,” says neuroscientist Wyatt Korff, director of project teams at Janelia. “It’s going to change the textbook view of neurons.”

In a typical biology textbook, neurons look something like a fried egg with a tail. Neurons send messages racing down the tail, or axon, and other neurons pick up the messages via branching tendrils called dendrites. Information zipping between these cells is what allows people to pick up a coffee cup or remember where they put the car keys. Scientists have long known that the textbook view of neurons is oversimplified, Chandrashekar says. But the team’s data suggest that neurons are often vastly more far-reaching and connected than scientists once thought.

Researchers have built broad maps outlining which parts of the brain connect to which, but capturing a zoomed-in view of individual neurons is rife with technical hurdles. Scientists have to light up neurons inside a mouse brain, slice it into thin sheets, image the sheets with a microscope, and then pick out single neurons among the millions of images collected.

Janelia scientists have traced the shape and position of more than 300 neurons in the mouse brain; in this composite reconstruction, each neuron is represented by a different color. Credit: Janelia Research Campus, MouseLight project team.

The Janelia team tackled the problem by fine-tuning each step of the process. “This work was only possible with a team science approach,” Korff says. Researchers involved in the project ranged from neuroscientists and anatomists to computer scientists and software engineers.

First, the researchers inject mouse brains with a virus that highlights only a few dozen neurons. Then the team “clears” the brain – to help light penetrate the tissue. Next, a high-tech light microscope hits the brain with pulses of light, takes an image of the highlighted neurons, and shaves off a 200-micrometer brain slice with a vibrating razor blade. The whole process repeats until the entire brain is imaged.

The microscope, an ultrafast version of a method called “two-photon microscopy” delivers just enough energy to make the highlighted neurons fluoresce without illuminating other focal planes. That gives researchers the sharp images needed for neural mapping. Each brain imaged yields approximately 20 terabytes of data – about the storage space of 4,000 DVDs. Sophisticated algorithms are used to stitch the images together, and a team of seven trained individuals scour the resulting dataset to digitally untangle individual neurons. 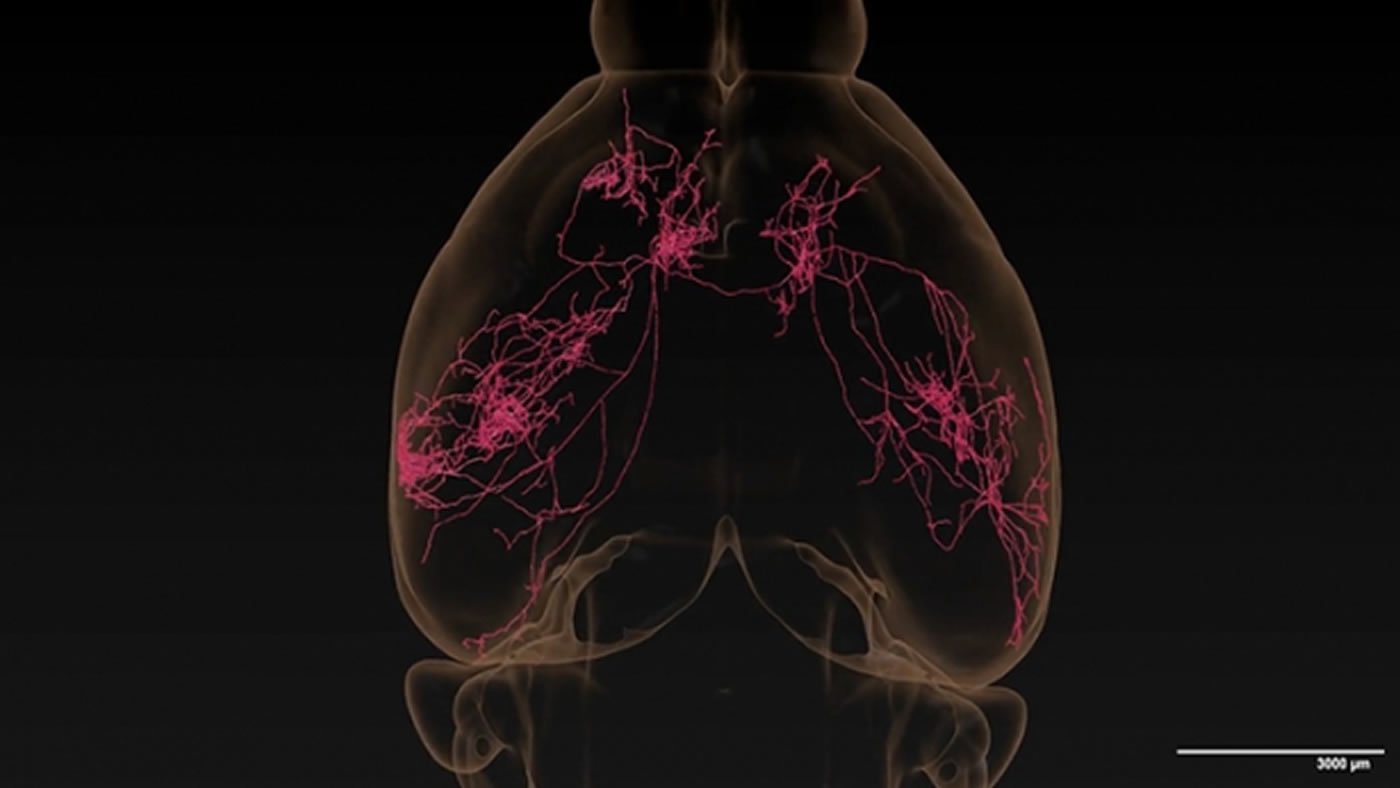 These people are full-time neuron tracers; their efforts and the software they use are critical for high-quality mapmaking, says neuroscientist Nelson Spruston, the senior director of scientific programs at Janelia. Two years ago, each person would have needed a week or two to track a neuron’s path through the brain. Today, by using neuron-tracing algorithms and software developed by MouseLight and Janelia’s Scientific Computing group, each team member can track roughly one neuron per day, he says.

Now that the team’s imaging-and-tracing pipeline is running full bore, Spruston says, “We’ll hit 1,000 total neurons traced in about a year.” By hitting this mark, the team expects the data to yield new insights into how elaborately branching neurons route information in the brain.

Even the team’s 300 fully-traced neurons are turning up surprises. For example, the axons of individual neurons in the thalamus often branch profusely in unexpected combinations of cortical areas, such as regions involved in taste, touch, and movement. Similarly, in the subiculum, a region involved in learning and memory, neurons almost always reach out to a few different places. In the neocortex, the six-layered structure associated with the highest cognitive functions, many single-neuron projections spread expansively. One neuron the researchers traced ran scattershot across the cerebral cortex, sending long, branching axons arcing across both hemispheres like a fireworks explosion.

A team of Janelia scientists has released a new data set of 300 fully-traced mouse neurons. Using the MouseLight NeuronBrowser, an analysis tool the team developed, the neuroscience community can explore the data and view the traced neurons in detail. Credit: Janelia Research Campus, MouseLight project team.

“This was striking to me,” Spruston says. “I had no idea that a single cortical neuron could send out so many connections to so much of the brain.” The ability to view neurons in such detail let him fully appreciate how extensively they communicate, he says.

Neuroscientist Eve Marder of Brandeis University agrees. “We knew that different regions of the brain talked to each other, but seeing it in 3-D is different,” she says. “The results are so stunning because they give you a really clear view of how the whole brain is connected.” Marder is a member of the Janelia Advisory Committee.

The new resource will allow every student with an Internet connection to visualize real neurons, not just the cartoons in textbooks, Chandrashekar says. The team’s work creating hundreds of high-quality single-neuron reconstructions, presented in a readily accessible reference volume, could accelerate scientific research and guide hypothesis formation, he says.

“It will provide a more complete view of how neuronal signals are sent across the brain.”

About this neuroscience research article