Summary: Researchers have developed a simple behavioral test to measure an individual’s risk of developing Alzheimer’s disease before symptoms appear.

Alzheimer’s disease is a neurodegenerative condition that damages a person’s ability to think, remember, and perform basic functions.

According to the National Institutes of Health, Alzheimer’s affects more than 6 million Americans, mostly ages 65 and older. Though the neurological damage from the disease is irreversible, early detection and intervention has been shown to slow its progression.

Before the onset of Alzheimer’s physical symptoms, the most commonly used method to measure an individual’s risk of developing the disease is through measuring levels of certain proteins, such as amyloid beta and tau proteins, in spinal fluid. This test is invasive, painful, and expensive.

Now, a team from Caltech and the Huntington Medical Research Institutes has made progress toward developing a simple behavioral test to measure an individual’s risk of developing Alzheimer’s before any symptoms arise.

The research was conducted in the laboratory of Shinsuke Shimojo, Gertrude Baltimore Professor of Experimental Psychology. Shimojo is an affiliated faculty member with the Tianqiao and Chrissy Chen Institute for Neuroscience at Caltech.

“Early detection of Alzheimer’s disease is important in order to take interventions that can slow the progression of the disease,” says the study’s first author Shao-Min Sean Hung, formerly a postdoctoral scholar in the Shimojo laboratory and now an assistant professor at Waseda University in Japan.

“What we’re trying to do is develop a test to detect behavioral abnormalities long before any onset of symptoms and in a less invasive way than measuring spinal fluid.”

The study involved 40 people with an average age of 75 and all cognitively healthy, who underwent myriad tests related to Alzheimer’s risk: magnetic resonance imaging (MRI) of the brain, genome sequencing, and the aforementioned invasive spinal fluid measurements.

The team developed a task in which a participant undergoes a so-called Stroop Paradigm test. In this common test, a person is shown a word—the name of a color—displayed in colored ink. However, the word itself does not necessarily match the color of the printed word—for example, the word “RED” is printed in the color green.

In this study, the researchers also added a hidden element to the Stroop Paradigm. Right before the actual target is shown, a colorless word is flashed rapidly on the screen—so rapidly that a participant cannot detect it consciously.

“The participants in our study are cognitively healthy at the explicit level, and we measure this through a battery of neuropsychological tests,” says Hung. 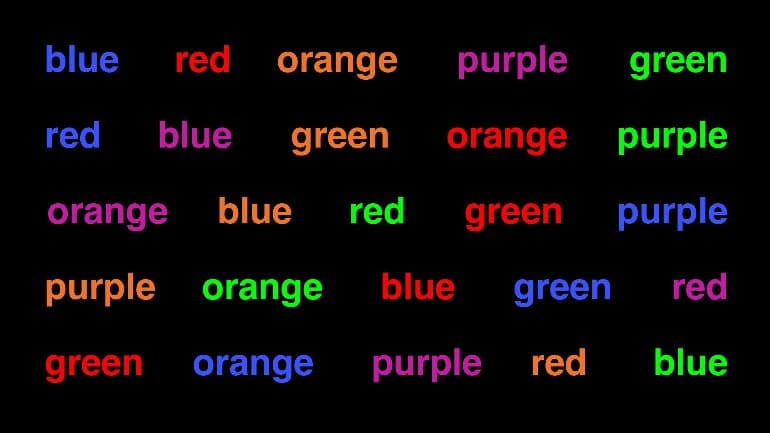 An example of a Stroop Paradigm test. It takes a bit of extra mental effort to name the color of a word when it doesn’t match the word itself. Credit: Caltech

The test showed that the individuals with high-risk biological factors slowed down by about 4 percent on the Stroop test when an unconscious and inconsistent word was flashed.

This suggests, Hung says, that the conditions that lead to Alzheimer’s may affect implicit cognition far before conscious cognition, and thus a test to measure implicit cognitive performance may be able to detect a high risk of developing Alzheimer’s disease without the need for invasive physical measurements.

The researchers emphasize that this test is not diagnostic yet—that is, this particular test cannot measure an individual’s risk for Alzheimer’s, but simply shows a correlation between the group of high-risk individuals and worse performance on the test when an unconscious distracting word is present.

The next steps are to combine the test with other noninvasive physical measurements, such as heart rate and other neurophysiological markers, with the goal of making it more predictive.

Abnormal cerebrospinal fluid amyloid beta (Aβ)42 and tau levels have been revealed decades before symptoms onset in Alzheimer’s disease (AD); however, the examination is usually invasive and inaccessible to most people. We thus aimed to develop a non-invasive behavioral test that targets early potential cognitive changes to gauge cognitive decline. Specifically, we hypothesized that older cognitive healthy participants would exhibit comparable performance when the task was explicit and relied on conscious cognition. However, when the task was implicit, the performance of participants at high and low risks for AD would bifurcate. That is, early changes in unconscious cognition could be linked to cognitive health.

We measured implicit interference elicited by an imperceptible distractor in cognitively healthy elderly participants with normal (low risk) and pathological (high risk) Aβ42/total tau ratio. Participants were required to perform a Stroop task (word-naming or color-naming on an ink-semantics inconsistent word) with a visually masked distractor presented prior to the target task.

We found that, under a high-effort task (i.e., color-naming in the Stroop task), high-risk participants suffered interference when the imperceptible distractor and the subsequent target were incongruent in the responses they triggered. Their reaction times were slowed down by approximately 4%. This implicit interference was not found in the low-risk participants.

These findings indicate that weakened inhibition of distracting implicit information can be a potential behavioral biomarker of early identification of AD pathology. Our study thus offers a new experimental paradigm to reveal early pathological aging by assessing how individuals respond to subperceptual threshold visual stimuli.