The bacterial toxin botulinum toxin (BTX)—colloquially known as Botox—is probably known to most people as a remedy for wrinkles. But botulinum toxin can do even more: if it is injected into the forehead, for example, it can alleviate depression.

Now the psychiatrists have found out where and how BTX influences the negative program in the brain. With the help of magnetic resonance imaging (MRI), they have visualized the neuronal effects in borderline patients.

The result: botulinum toxin influences the so-called amygdala or almond nucleus in the temporal lobe in the brain, where fears arise and are processed.

The work was recently published in the journal Scientific Reports.

Feedback between muscles and psyche

Negative moods are expressed on the face in the so-called glabellar region, the area of the lower middle forehead. When we are angry or tense, two different types of muscles contract and cause frown lines or worry lines to appear above the root of the nose.

When botulinum toxin is injected into the glabellar region, it paralyzes these muscles between the eyebrows. Because facial expressions and psychological state are closely linked, this also reduces the intensity of emotions.

In science, this feedback is discussed as facial feedback theory. In an earlier meta-analysis, Professor Krüger and his team had already demonstrated that a BTX injection into the glaballar region has a positive influence on mood and mood arousal.

Depressive symptoms improve significantly as a result. “The treatment has several advantages at once: Since the paralyzing effect lasts for three or more months, an injection also only needs to be given at these intervals. The infrequent injections are also less costly than some other therapy options and have a very good tolerance and acceptance among patients,” Professor Krüger explains.

And this works for depression as well as for borderline personality disorder. About three percent of Germans suffer from this disorder, and more than 62% of those affected are women. By interrupting the feedback loop between the forehead muscles and the brain, botulinum toxin also changes the emotional feedback. 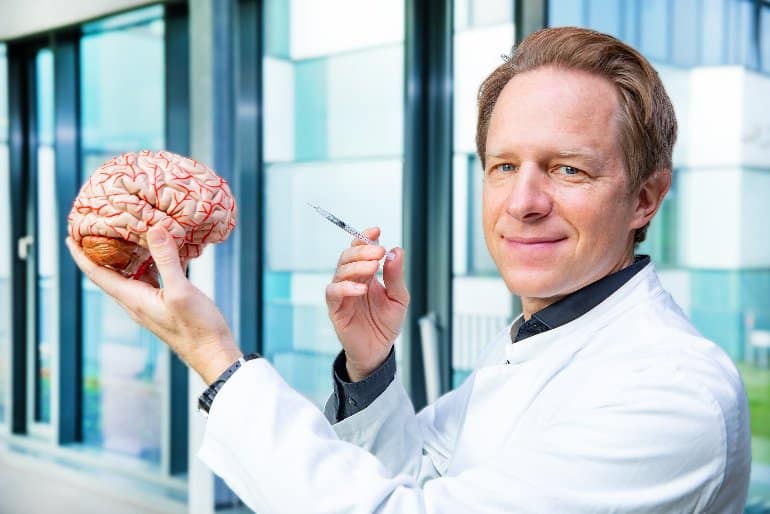 The researchers were able to prove this in the brains of borderline patients who had been treated with a botulinum toxin injection in the glabellar region. Just four weeks later, the patients had significantly reduced symptoms, which was also shown in the MRI images.

“We were able to see that botulinum toxin curbs the emotional constant fire in the tonsil nucleus, which accompanies the high-grade inner tension of the affected persons,” says the psychiatrist. A comparison group treated with acupuncture also showed improved clinical symptoms, but not the neuronal effects in the MRI examination. However, the feedback between muscles and brain does not only work in the glabellar region.

This is the result of a database study in which Professor Krüger and his colleague Professor Wollmer were involved and which was already published in the journal Scientific Reports at the end of 2021.

In collaboration with the University of California San Diego, they found that botulinum toxin can also alleviate anxiety disorders when injected into the head muscles, the muscles of the upper and lower limbs and the neck muscles.

So far, however, BTX treatment for mental illnesses has not been included in the services provided by health insurance companies. The psychiatrist hopes that this will change when the mode of action has been better researched.

Botulinum toxin, colloquially known as Botox, is the strongest known neurotoxin. It is produced by the bacterium Clostridium botulinum in the absence of air and causes so-called botulism. The symptoms of poisoning are usually caused by eating poorly preserved food in which the bacterial toxin has accumulated. This inhibits the transmission of excitation from nerve cells to other cells, especially at the junctions to muscle and blood.

Previous studies have indicated that glabellar botulinum toxin (BTX) injections may lead to a sustained alleviation of depression. This may be accomplished by the disruption of a facial feedback loop, which potentially mitigates the experience of negative emotions.

In order to improve the understanding of how glabellar BTX may affect the processing of emotional stimuli and impulsivity, we conducted a functional magnetic resonance imaging (fMRI) study.

Our hypotheses were (1) glabellar BTX leads to increased activation in prefrontal areas during inhibition performance and (2) BTX decreases amygdala activity during the processing of emotional stimuli in general. Using an emotional go-/no-go paradigm during fMRI, the interference of emotion processing and impulsivity in a sample of n = 45 women with BPD was assessed.

Subjects were randomly assigned to BTX treatment or serial acupuncture (ACU) of the head. After 4 weeks, both treatments led to a reduction in the symptoms of BPD.

However, BTX treatment was specifically associated with improved inhibition performance and increased activity in the motor cortex. In addition, the processing of negative emotional faces was accompanied by a reduction in right amygdala activity.

This study provides the first evidence that glabellar BTX injections may modify central neurobiological and behavioural aspects of BPD. Since the control treatment produced similar clinical effects, these neurobiological findings may be specific to BTX and not a general correlate of symptomatic improvement.