Summary: Brief exposure to Rapamycin, a promising anti-aging drug that has positive effects on health and lifespan, has the same effect as long-term exposure to the drug in animal models. The findings pave the way for testing the effects of short-term rapamycin exposure on the lifespan of humans.

Imagine you could take a medicine that prevents the decline that come with age and keeps you healthy. Scientists are trying to find a drug that has these effects.

The current most promising anti-ageing drug is Rapamycin, known for its positive effects on life and health span in experimental studies with laboratory animals.

To obtain the maximum beneficial effects of the drug, it is often given lifelong. However, even at the low doses used in prevention for age-related decline, negative side effects may occur, and it is always desirable to use the lowest effective dose.

A research group at the Max Planck Institute for Biology of Ageing in Cologne, Germany, has now shown in laboratory animals that brief exposure to rapamycin has the same positive effects as lifelong treatment opening new doors for a potential application in humans.

Combatting the negative effects of aging is increasingly becoming the focus of research scientists. Lifestyle changes can improve health of older people, but alone is not sufficient to prevent the ills of older age. Repurposing existing drugs for ‘geroprotection’ is providing an additional weapon in the prevention of age-related decline.

The current most promising anti-aging drug is rapamycin, a cell growth inhibitor and immunosuppressant that is normally used in cancer therapy and after organ transplantations.

“At the doses used clinically, rapamycin can have undesirable side-effects, but for the use of the drug in the prevention of age-related decline, these need to be absent or minimal. Therefore, we wanted to find out when and how long we need to give rapamycin in order to achieve the same effects as lifelong treatment”, explains Dr. Paula Juricic, the leading investigator of the study in the department of Prof. Linda Partridge, director at the Max Planck Institute for Biology of Aging.

The scientists have tested different time windows of short-term drug administration in fruit flies and found that a brief window of 2 weeks of rapamycin treatment in young, adult flies protected them against age-related pathology in the intestine and extended their lives.

A corresponding short time window, 3 months of treatment starting at 3 months of age in young, adult mice, had similar beneficial effects on the health of the intestine when they were middle-aged. 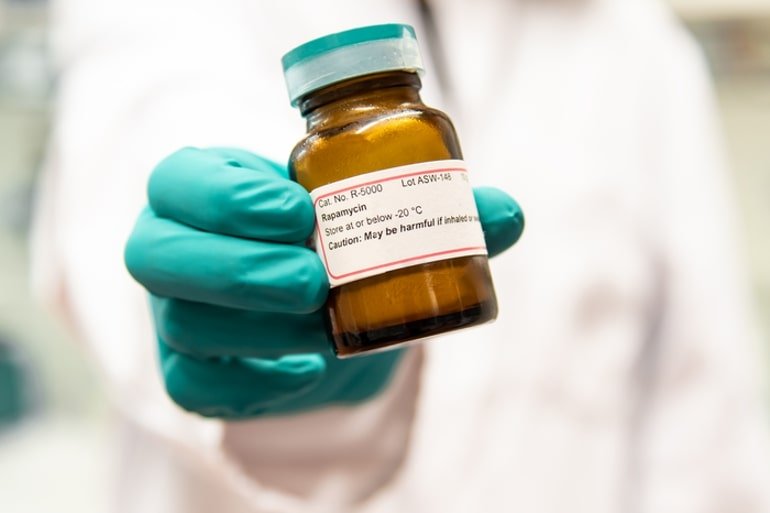 “These brief drug treatments in early adulthood produced just as strong protection as continuous treatment started at the same time.

“We also found that the rapamycin treatment had the strongest and best effects when given in early life as compared to middle age. When the flies were treated with rapamycin in late life, on the other hand, it had no effects at all.

“So, the rapamycin memory is activated primarily in early adulthood”, explains Dr. Thomas Leech, co-author of the paper.

One step closer to applications

“We have found a way to circumvent the need for chronic, long-term rapamycin intake, so it could be more practical to apply in humans”, says Dr. Yu-Xuan Lu, also co-author of the paper. Prof. Linda Partridge, the senior author of the study, comments:

“It will be important to discover whether it is possible to achieve the geroprotective effects of rapamycin in mice and in humans with treatment starting later in life, since ideally the period of treatment should be minimized. It may be possible also to use intermittent dosing.

“This study has opened new doors, but also raised many new questions”.

The licensed drug rapamycin has potential to be repurposed for geroprotection. A key challenge is to avoid adverse side effects from continuous dosing.

Here we show that geroprotective effects of chronic rapamycin treatment can be obtained with a brief pulse of the drug in early adulthood in female Drosophila and mice.

In Drosophila, a brief, early rapamycin treatment of adults extended lifespan and attenuated age-related decline in the intestine to the same degree as lifelong dosing. Lasting memory of earlier treatment was mediated by elevated autophagy in intestinal enterocytes, accompanied by increased levels of intestinal LManV and lysozyme.

Brief elevation of autophagy in early adulthood itself induced a long-term increase in autophagy. In mice, a 3-month, early treatment also induced a memory effect, with maintenance similar to chronic treatment, of lysozyme distribution, Man2B1 level in intestinal crypts, Paneth cell architecture and gut barrier function, even 6 months after rapamycin was withdrawn.

Studying Schizophrenia by Emulating It in a Petri Dish – Neuroscience News