The study of 16 cats is published in the journal Animal Cognition and adds to evidence that cats may form strong bonds with their owner.

Human tone is known to vary depending on who the speech is directed to, such as when talking to infants and dogs. The tone of human speech has been shown in previous studies to change when directed at cats, but less is known about how cats react to this.

Charlotte de Mouzon and colleagues from Université Paris Nanterre (Nanterre, France) investigated how 16 cats reacted to pre-recorded voices from both their owner and that of a stranger when saying phrases in cat-directed and human adult-directed tones.

The authors investigated three conditions, with the first condition changing the voice of the speaker from a stranger’s voice to the cat’s owner.

The second and third conditions changed the tone used (cat-directed or adult-directed) for the cat’s owner or a stranger’s voice, respectively.

The authors recorded and rated the behaviour intensity of cats reacting to the audio, checking for behaviours such as resting, ear moving, pupil dilation, and tail moving, amongst others.

The cats displayed behaviours such as turning their ears to the speakers, increased movement around the room, and pupil dilation when hearing their owners’ voice.

The authors suggest that the sudden rebound in behaviour indicates that cats could discriminate their owner’s voice from that of a stranger. 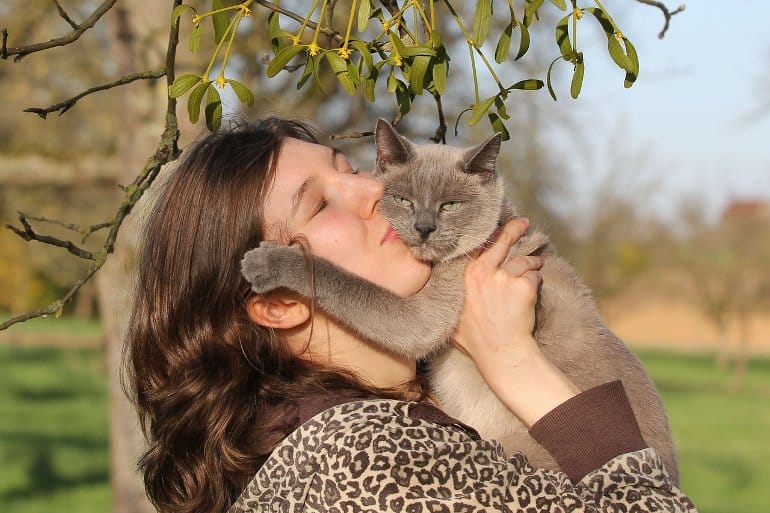 The authors observed that the cats can distinguish when their owner is talking in a cat-directed tone compared to an adult-directed tone, but did not react any differently when a stranger changes tone. Image is in the public domain

The change in behaviour intensity was not found in the third condition when a stranger was speaking in an adult-directed and cat-directed tone.

The authors observed that the cats can distinguish when their owner is talking in a cat-directed tone compared to an adult-directed tone, but did not react any differently when a stranger changes tone.

The small sample size used in this study may not represent all cat behaviour but the authors propose that future research could investigate if their findings can be replicated in more socialised cats that are used to interacting with strangers.

The authors suggest that their findings bring a new dimension to cat-human relationships, with cat communication potentially relying on experience of the speaker’s voice. They conclude that one-to-one relationships are important for cats and humans to form strong bonds.

In contemporary western cultures, most humans talk to their pet companions. Speech register addressed to companion animals shares common features with speech addressed to young children, which are distinct from the typical adult-directed speech (ADS).

The primary aim of this study was to evaluate whether cats are more responsive to CDS than ADS. Secondarily, we seek to examine if the cats’ responses to human vocal stimuli would differ when it was elicited by their owner or by a stranger.

We performed playback experiments and tested a cohort of 16 companion cats in a habituation–dishabituation paradigm, which allows for the measurement of subjects’ reactions without extensive training.

These findings bring a new dimension to the consideration of human–cat relationship, as they imply the development of a particular communication into human–cat dyads, that relies upon experience. We discuss these new findings in the light of recent literature investigating cats’ sociocognitive abilities and human–cat attachment.

Our results highlight the importance of one-to-one relationships for cats, reinforcing recent literature regarding the ability for cats and humans to form strong bonds.