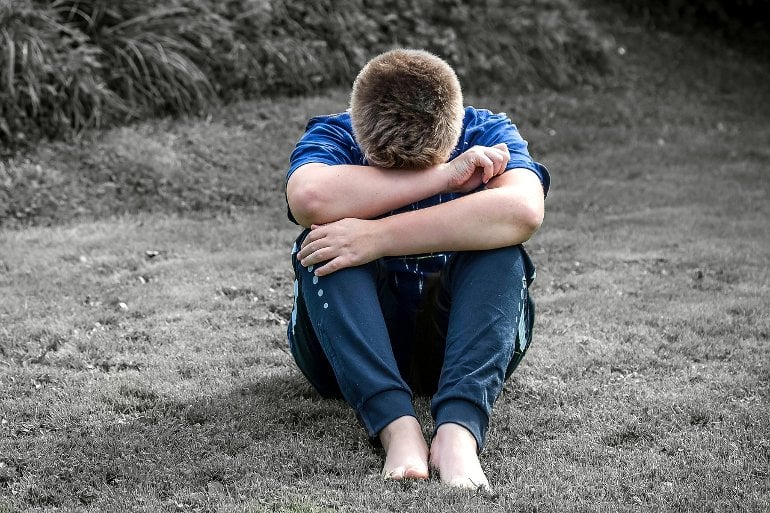 Summary: One-quarter of teens and young adults engaged in episodes of self-harm on more than one occasion. Repeated self-harm episodes are more likely to occur during the first year of the first episode, with the greatest risk within the first month.

The risk of repeat self-harm in young people is highest in the first month after an initial self-harm hospital presentation.

Suicidal behavior is evident in children, with some as young as 10 presenting to hospitals and emergency departments following a self-harm episode—some on multiple occasions.

Research has found 6,055 adolescents aged 10–14 attended an emergency department in New South Wales for self-harm over a five-year period—2,276 of them for a repeat incidence.

In the study, published in the Journal of Affective Disorders, researchers from the Black Dog Institute and UNSW Medicine & Health analyzed more than 81,000 hospital-presenting self-harm episodes among 48,547 individuals aged 10–29 years identified during 2014–2019 in New South Wales.

They found approximately one-quarter had engaged in self-harm more than once. Repeat self-harm was most likely to occur in the year following the initial episode—specifically in the first month.

“Anecdotally, we’ve been finding that teachers are overhearing self-harm and suicide being discussed in the playground from the primary school years,” says Dr. Michelle Tye, senior author of the study who is from the Black Dog Institute and UNSW Medicine & Health.

“This study supports that children and adolescents are a high-risk group for self-harm and repeat self-harm.”

The research also found the risk of repeat self-harm was highest among children and adolescents who had their index (first) episode between ages 10–19, and for more severe presentations requiring admission to hospital. According to the findings, those with two or more self-harm presentations had a higher risk of dying from suicide.

While the study couldn’t determine intent, repeat self-harm is a predictor of suicide, which is the leading cause of death for Australians aged between 15–44. Self-harm is also a risk factor for a suicide attempt, which is even more common, with some estimates suggesting they occur up to 30 times as often as deaths.

Lead author of the study Dr. Jiahui Qian, from the Black Dog Institute and UNSW Medicine & Health, says self-harm behaviors among adolescents may be even more widespread than reported.

“We only looked at self-harm presentations to an emergency department. But there will be many more young people in the community who self-harm but don’t go to a hospital and so aren’t represented in this study,” Dr. Qian says.

“We observed a higher risk of repeat self-harm and suicide death in males, but overall self-harm presentations are much more prevalent in females,” Dr. Qian says.

Dr. Tye says it could be that males escalate the lethality of their means of self-harm more than females, but that’s a question future research may be able to help explain.

While the complete prevention of self-harm may not be realistic, we can hope to reduce the extent of it, particularly for young people. Youth-specific early intervention is critical to prevent future self-harm episodes for adolescents.

The researchers say more evidence-based programs in schools would help expose large cohorts of young people to adaptive coping strategies, raise awareness of the warning signs of suicide and non-suicidal self-harm, and educate young people about how to seek help.

“We need better (and more) suicide prevention-focused programs in schools to empower young people to recognize the warning signs, and improve their capacity to seek out and get the right support,” Dr. Tye says.

According to the findings, those with two or more self-harm presentations had a higher risk of dying from suicide. Image is in the public domain

There is also a need to improve clinical assessment in frontline health services. For many, the experience of presenting to an emergency department can be varied, and clinical support and post-discharge care isn’t always adequate, Dr. Tye says.

Routine psychosocial assessments and follow-ups with patients may help reduce the risk of repeat self-harm and suicide death over the long term. But the heightened risk in the first month following a self-harm episode also indicates a need for more immediate patient support.

“Ideally, all young people should have access to ongoing support through coordinated aftercare approaches, particularly in those first few weeks after their presentation to hospital, to protect against repeat self-harm,” Dr. Tye says.

Dr. Qian says developing new insights into how to respond effectively to self-harm will help suicide prevention efforts. There is an increasingly critical need to learn from children and adolescents who are presenting for self-harm to hospital to help researchers better understand intervention opportunities, guide service provision and improve clinical management.

“Because we’re better able to identify young people who self-harm from hospital records, rather than in the community, we have an opportunity to engage with them to help us understand how we can develop better preventative strategies and find new opportunities for intervention,” Dr. Qian says.

Self-harm is a critical issue affecting young people which could result in adverse outcomes including repeat episodes and suicide. In this study, we aimed to estimate the short-term and long-term risk of repeat self-harm and subsequent suicide death following self-harm presentations among adolescents and young adults.

Using linked data from the New South Wales (NSW) Emergency Department Data Collection (EDDC), the NSW Admitted Patient Data Collection (APDC), and cause of death unit record file (COD-URF), we collected all self-harm presentations to emergency departments and/or hospitals and suicide deaths between 2012 and 2019 in NSW, Australia. We used survival analysis models to estimate the incidence of repeat self-harm and suicide by time since the index self-harm and relative risks by sex, type of hospital presentation and count of self-harm records.

Adolescents and young adults with self-harm presentations were at a high risk of subsequent repeat self-harm and suicide death, especially the first year after presentations. Youth-specific early intervention and long-term management should be delivered accordingly, especially for those at early adolescence .

What if Some Stress Actually Protects Your Body? – Neuroscience News