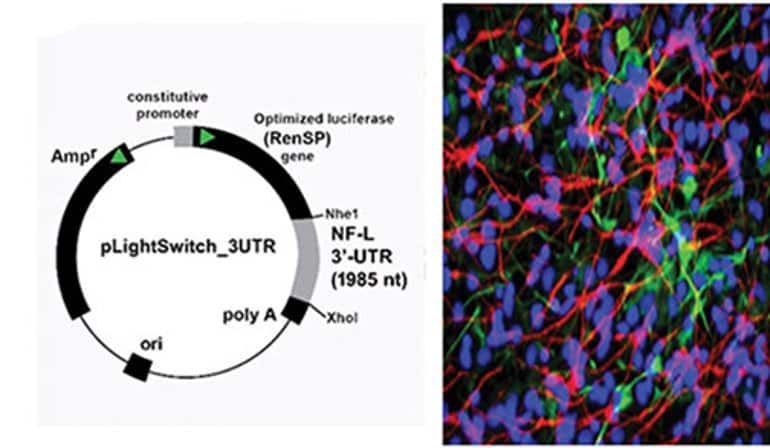 Summary: Researchers identified a pathway that begins in the gut and ends with a pro-inflammatory protein in the brain that appears to contribute to the development and progression of Alzheimer’s disease.

Research led by Drs. Yuhai Zhao and Walter J Lukiw at the LSU Health New Orleans Neuroscience Center and the Departments of Cell Biology and Anatomy, Neurology and Ophthalmology, reports for the first time a pathway that begins in the gut and ends with a potent pro-inflammatory toxin in brain cells contributing to the development of Alzheimer’s disease (AD). They also report a simple way to prevent it.

Results are published in Frontiers in Neurology.

The researchers found evidence that a molecule containing a very potent microbial-generated neurotoxin (lipopolysaccharide or LPS) derived from the Gram-negative bacteria Bacteroides fragilis in the human gastrointestinal (GI) tract generates a neurotoxin known as BF-LPS.

“LPSs in general are probably the most potent microbial-derived pro-inflammatory neurotoxic glycolipids known,” says Dr. Lukiw. “Many laboratories, including our own, have detected different forms of LPS within neurons of the Alzheimer’s disease-affected human brain.”

In this study, the researchers detail the pathway of BF-LPS from the gut to the brain and its mechanisms of action once there. BF-LPS leaks out of the GI tract, crosses the blood-brain barrier via the circulatory system, and accesses brain compartments. Then it increases inflammation in brain cells and inhibits neuron-specific neurofilament light (NF-L,) a protein that supports cell integrity.

A deficit of this protein leads to progressive neuronal cell atrophy, and ultimately cell death, as is observed in AD-affected neurons. They also report that adequate intake of dietary fiber can head off the process.

The novel features of this newly described pathological pathway are threefold. The AD-stimulating pathway begins inside of us—in our GI-tract microbiome—and therefore is very “locally sourced” and active throughout our lives.

BF-LPS leaks out of the GI tract, crosses the blood brain barrier via the circulatory system, and accesses brain compartments. Credit: LSU

The highly potent neurotoxin BF-LPS is a natural by-product of GI-tract-based microbial metabolism. Bacteroides fragilis abundance in the microbiome, which is the source of the neurotoxin BF-LPS, can be regulated by dietary fiber intake.

“Put another way, dietary-based approaches to balance the microorganisms in the microbiome may be an attractive means to modify the abundance, speciation, and complexity of enterotoxigenic forms of AD-relevant microbes and their potential for the pathological discharge of highly neurotoxic microbial-derived secretions that include BF-LPS and other forms of LPS,” Lukiw explains.

The researchers conclude that an improved understanding of the interaction between the GI tract-Central Nervous System axis and the GI-tract microbiome and Alzheimer’s disease has considerable potential to lead to new diagnostic and therapeutic strategies in the clinical management of Alzheimer’s disease and other lethal, progressive, and age-related neurodegenerative disorders.

It has been estimated that Americans eat 10–15 grams of fiber a day on average. The USDA recommends that women up to age 50 consume 25 grams a day and men 38 grams. Over age 50, women and men should consume 21 and 30 grams daily, respectively.

According to the National Institutes of Health, Alzheimer’s disease is the most common diagnosis for patients with dementia and the sixth leading cause of death for Americans. Experts estimate that as many as 5.8 million Americans 65 and older have Alzheimer’s disease, and the prevalence in the United States is projected to increase to 13.8 million by 2050.

Here we provide evidence that this neuropathology-associated miRNA, known to be upregulated in AD brain and LPS-stressed human neuronal-glial (HNG) cells in primary culture targets the neurofilament light (NF-L) chain mRNA 3′-untranslated region (3′-UTR), which is conducive to the post-transcriptional downregulation of NF-L expression observed within both AD and LPS-treated HNG cells.

A deficiency of NF-L is associated with consequent atrophy of the neuronal cytoskeleton and the disruption of synaptic organization. Interestingly, miRNA-30b has previously been shown to be highly expressed in amyloid-beta (Aβ) peptide-treated animal and cell models, and Aβ peptides promote LPS entry into neurons. Increased miRNA-30b expression induces neuronal injury, neuron loss, neuronal inflammation, impairment of synaptic transmission, and synaptic failure in neurodegenerative disease and transgenic murine models.

This gut microbiota-derived LPS-NF-kB-miRNA-30b-NF-L pathological signaling network: (i) underscores a positive pathological link between the LPS of gastrointestinal (GI)-tract microbes and the inflammatory neuropathology, disordered cytoskeleton, and disrupted synaptic signaling of the AD brain and stressed brain cells; and (ii) is the first example of a microbiome-derived neurotoxic glycolipid having significant detrimental miRNA-30b-mediated actions on the expression of NF-L, an abundant neuron-specific filament protein known to be important in the maintenance of neuronal cell shape, axonal caliber, and synaptic homeostasis.

I Never Forget a Face: The Science of Super-Recognizers’ Amazing Feats of Recognition – Neuroscience News