Our siblings play a central role in our childhoods, so it stands to reason they influence our personality in the long term. In particular, researchers have long been interested in how growing up with a sister compared to a brother might influence who we become as adults.

How do children interact with their sister or brother? How do parents behave differently towards their children of different genders, and how does that interaction influence the children?

Past theories have made quite different predictions: siblings of the opposite gender may plausibly result in either gender-stereotypical personalities (a girl may take on a more feminine role to differentiate herself from her brother) or less gender stereotypical personalities (a girl may take on more masculine traits because she imitates her brother).

In fact, psychological research has been exploring these differences for over half a century. In some studies, siblings of the opposite sex seemed to be more gender-conforming. Girls with brothers later become more “typically female” and boys with sisters more “typically male”.

Other studies find the exact opposite, however. Opposite gender siblings developed in typically gender-conforming ways. To resolve these contradictions, we wanted to test the effect of sibling gender on personality in a rigorous and comprehensive way.

In our new study we focused on the relationships between children and their next older or younger sibling. We compiled a unique data set by combining 12 large representative surveys covering nine countries across four continents (US, UK, Netherlands, Germany, Switzerland, Australia, Mexico, China and Indonesia).

This resulted in a data set of more than 85,000 people – many times the sample sizes used in previous studies.

We also investigated many more personality traits than previous studies have. This included the traits that have been most widely studied in other research, and which have been shown to be important predictors of people’s decisions and choices.

The “big five” of these traits are: openness to experiences, conscientiousness, extroversion, agreeableness and neuroticism. The other traits examined were: risk tolerance, trust, patience and “locus of control” (the degree to which people believe they have control over their lives).

We also created an index describing to what extent people have a typically female personality. This allowed us to test comprehensively whether growing up with an opposite gender sibling leads to a more or less gender-stereotypical personality.

This study is not only innovative in its use of a large data set, but it also applies a consistent method to identify any causal effects of a sibling’s gender on personality traits. 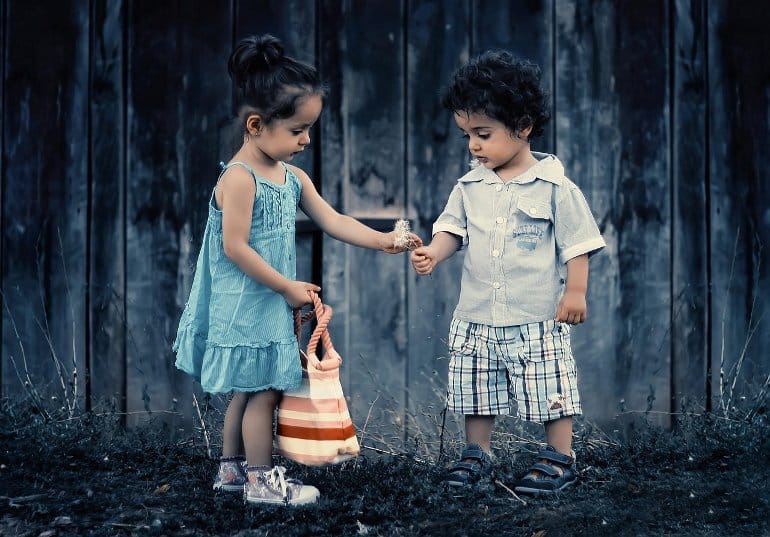 Like brother, like sister? Researchers have differed on the likely influence of an opposite gender sibling on personality. Image is in the public domain

To estimate credible causal effects, we make use of an interesting fact of nature: once parents decide to have another child it is essentially random whether they have a girl or boy. In this “natural experiment” some people are therefore “randomly assigned” a younger sister or brother.

The results help refute the idea that brothers or sisters cause each other to develop “feminine” or “masculine” personality traits over the long term.

However, the results don’t mean sibling gender has no long-term effect at all. Other studies that applied a similar methodological approach have shown that women with brothers in the US and Denmark earn less. And a study of Asian populations has found women with younger sisters marry earlier and women with older sisters marry later.

So, there seem to be interesting sibling dynamics related to gender – but personality is probably not part of the explanation for those effects.

No Evidence That Siblings’ Gender Affects Personality Across Nine Countries

Does growing up with a sister rather than a brother affect personality?

Given the high statistical power and consistent results in the overall sample and relevant subsamples, our results suggest that siblings’ gender does not systematically affect personality.