Alzheimer’s disease is the sixth leading cause of death in the United States, affecting more than 6 million Americans, and its incidence is expected to rise in the coming decades.

The cause of the disease in its most common form, which is not genetically based, is not well understood. This makes treatment difficult, but progress is being made. Using a 3D model of living human brain cells, Tufts researchers earlier this year showed that the common herpes virus could induce plaques in the brain associated with Alzheimer’s disease.

Now, Tufts researchers are working to understand what might slow progression of the disease. They have tested 21 different compounds in Alzheimer’s-afflicted neural cells in the lab, measuring the compounds’ effect on the growth of sticky beta amyloid plaques. These plaques develop in the brains of people with Alzheimer’s.

The researchers found that two common compounds—green tea catechins and resveratrol, found in red wine and other foods—reduced the formation of plaques in those neural cells. And they did so with few or no side effects.

The researchers reported their findings in the journal Free Radical Biology and Medicine.

Some of the 21 compounds tested reduced the disease progression by acting as anti-viral agents—slowing Alzheimer’s induced by the herpes virus.

But finding a compound “that could diminish the plaques regardless of the virus component would be ideal, because that would show that regardless of the cause of Alzheimer’s, you might still see some kind of improvement,” says Dana Cairns, GBS12. Cairns is a research associate in the Kaplan Lab in the School of Engineering and led the research.

The initial screening was done in simpler models, and compounds that had a positive effect were then tested in the 3D neural tissue model. That model is created using a nonreactive silk sponge seeded with human skin cells that, through genetic reprogramming, are converted into neural stem cell progenitors.

Those cells grow and populate the sponge, “which allows for 3D network formation of neurons similar to what you’d see in the human brain,” Cairns says.

The initial screen found five compounds had “really robust prevention of these plaques,” she says. In addition to the green tea compounds and resveratrol, they found curcumin from turmeric, the diabetic medication Metformin, and a compound called citicoline prevented plaques from forming and did not have anti-viral effects.

“We hoped to find compounds that would be harmless and show some level of efficacy,” she said. Green tea compounds and resveratrol met that standard.

“We got lucky that some of these showed some pretty strong efficacy,” Cairns said.

“In the case of these compounds that passed the screening, they had virtually no plaques visible after about a week.”

Green tea catechins—molecules in the tea leaves that have an antioxidant effect—have been explored as a potential treatment for cancers, and resveratrol has been tested for anti-aging properties.

Cairns cautioned that seeing effects in the lab “doesn’t always necessarily translate to what you might see in a patient.” Some compounds do not cross the blood-brain barrier, which would be essential in the case of Alzheimer’s, and some have low bioavailability, meaning they are not readily absorbed into the body or bloodstream.

Still, the discovery is significant because there is no cure for Alzheimer’s or a way to prevent its progression, aside from several potential drugs developed by pharmaceutical companies that are still in trials, Cairns says. 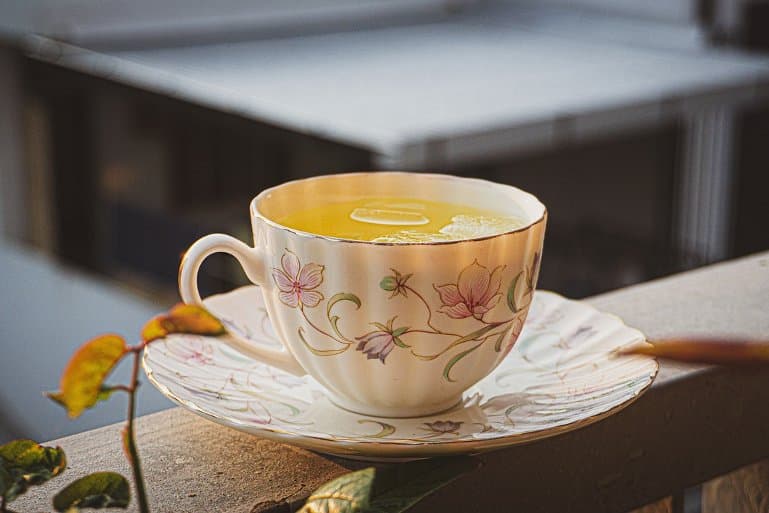 The researchers found that two common compounds—green tea catechins and resveratrol, found in red wine and other foods—reduced the formation of plaques in those neural cells. Image is in the public domain

Compounds like these two that show some efficacy and are known to be safe and easily accessible could be taken as a supplement or consumed as part of one’s diet, she adds.

“For example, natural sources of resveratrol include red wine, certain fruits such as grapes, blueberries, and cranberries, peanuts, pistachios, and cocoa,” says Cairns.

“While it is empowering to be able to take measures like these to potentially prevent neurodegeneration in the future, it is also important to consult with your health-care provider before making any major changes to your diet.”

Looking ahead, a potential area of research for researchers and pharmaceutical companies would be to take the beneficial properties of these compounds and “try to enhance them to make them more bioavailable or make them penetrate the blood-brain barrier a bit better,” Cairns says.

In addition to Cairns, other co-authors of the journal article include Isabella A. Silveira, E21, and Adam Mullis, a postdoctoral scholar at Tufts, along with David Kaplan, Stern Family Professor of Engineering and chair of the Department of Biomedical Engineering.

Alzheimer’s Disease (AD) is a neurodegenerative disorder that can cause life-altering and debilitating cognitive decline. AD’s etiology is poorly understood, and no disease-modifying therapeutics exist.

Here, we describe the use of 2D and 3D tissue culture models of herpesvirus-induced AD, which recapitulate hallmark disease features of plaque formation, gliosis, neuroinflammation, and impaired neuronal signaling, to screen a panel of 21 medications, supplements, and nutraceuticals with purported neuroprotective benefits.

This screen identified green tea catechins and resveratrol as having strong anti-plaque properties, functional neuroprotective benefits, and minimal neurotoxicity, providing support for their further investigation as AD preventives and therapies.

Two other candidates, citicoline and metformin, reduced plaque formation and were minimally toxic, but did not protect against virus-induced impairments in neuronal signaling.