Summary: Trigger finger, a condition in which the fingers get locked into a bent position and become difficult to straighten, is more common in those with diabetes than in the general population. High blood sugar levels increase the risk of developing trigger finger, researchers say.

Locked fingers, known as trigger finger, are more common among people with diabetes than in the general population. A study led by Lund University in Sweden shows that the risk of being affected increases in the case of high blood sugar. The study has been published in Diabetes Care.

Trigger finger means that one or more fingers, often the ring finger or thumb, ends up in a bent position that is difficult to straighten out. It is due to the thickening of tendons, which bend the finger, and their connective tissue sheath, which means that the finger becomes fixed in a bent position towards the palm. It is a painful condition that can often be treated with cortisone injections, but sometimes requires surgery.

“At the hand surgery clinic, we have noted for a long time that people with diabetes, both type 1 and type 2, are more often affected by trigger finger. Over 20 percent of those who require surgery for this condition are patients who have, or will develop, diabetes,” says Mattias Rydberg, doctoral student at Lund University, resident physician at Skåne University Hospital and first author of the study.

To study whether high blood sugar (blood sugar dysregulation) increases the risk of trigger finger, the researchers examined two registers: Region Skåne’s healthcare database, which includes all diagnoses, and the Swedish national diabetes register. Between 1 and 1.5 percent of the population are affected by trigger finger, but the diagnosis arises among 10-15 percent of those who have diabetes, and the phenomenon appears most in the group with type 1 diabetes.

Blood sugar is measured in HbA1C, also referred to as long-term blood sugar, and when regulated, is under 48. The group of men with the worst regulated blood sugar (HbA1C > 64) had up to 5 times as high a risk of being affected than men with well-regulated (HbA1< 48) blood sugar.

“However, we can’t know for certain if any of the groups seek healthcare more often than others which could be a factor that affects the results,” says Mattias Rydberg.

The mechanism, or mechanisms, behind the increased risk are unknown, but there are theories that high blood sugar makes both the flexor tendons and their connective tissue sheaths thicker, thus causing them to lock more easily. It was previously known that those with unregulated blood sugar are more prone to nerve entrapments in the hand.

“It is important to draw attention to the complications from diabetes and how they can arise in order to discover them early, which enables faster treatment and thus a better outcome. 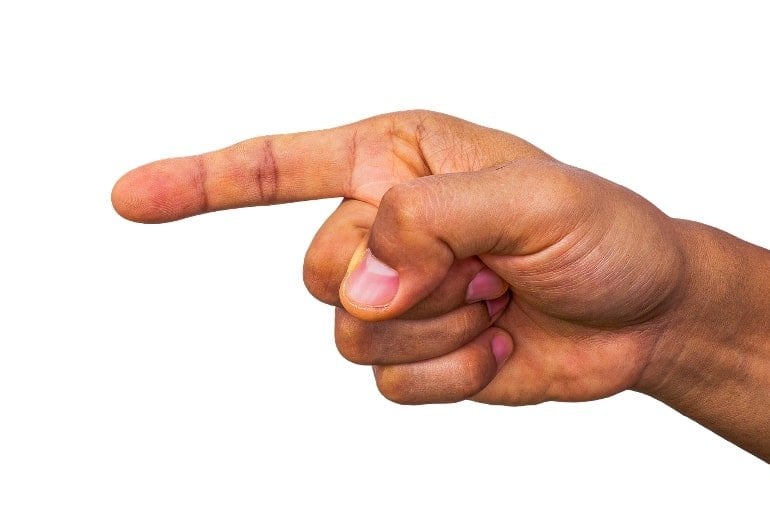 The newly published study strengthens the pattern of blood sugar being a crucial factor for an increased risk of being affected by trigger finger. Image is in the public domain

“In addition to nerve compressions and trigger finger, there may also be a link with thickening of the connective tissue in the palm (Dupuytren’s contracture), impairment of joint movement and the risk of arthritis at the base of the thumb. The mechanisms behind these complications probably differ in the case of diabetes.

“The results of this study are interesting, as we can show that blood sugar dysregulation has a connection with the development of trigger finger,” says Lars B. Dahlin, professor at Lund University and consultant in hand surgery at Skåne University Hospital.

The next step in the research will be to chart how effective it is to operate on patients with diabetes who are affected by trigger finger.

“From our experience at the clinic, surgery goes well and there are few complications, but it takes a little longer for patients with type 1 and type 2 diabetes to regain full movement and function. We want to investigate this hypothesis further. Another interesting idea is to see if trigger finger could be a warning signal for type 2 diabetes.

“It is far from all who are affected by trigger finger that have diabetes, but it would be interesting to see if by using modern registers we can discover those who are in the risk zone for developing diabetes,” concludes Mattias Rydberg.

High HbA1c Levels Are Associated With Development of Trigger Finger in Type 1 and Type 2 Diabetes: An Observational Register-Based Study From Sweden

Trigger finger (TF) is a hand disorder causing the fingers to painfully lock in flexion. Diabetes is a known risk factor; however, whether strict glycemic control effectively lowers risk of TF is unknown. Our aim was to examine whether high HbA1c was associated with increased risk of TF among individuals with diabetes.

The Swedish National Diabetes Register (NDR) was cross-linked with the health care register of the Region of Skåne in southern Sweden. In total, 9,682 individuals with type 1 diabetes (T1D) and 85,755 individuals with type 2 diabetes (T2D) aged ≥18 years were included from 2004 to 2019. Associations between HbA1c and TF were calculated with sex-stratified, multivariate logistic regression models with 95% CIs, with adjustment for age, duration of diabetes, BMI, and systolic blood pressure.

Hyperglycemia increases the risk of developing TF among individuals with T1D and T2D. Optimal treatment of diabetes seems to be of importance for prevention of diabetic hand complications such as TF.