Summary: Study reveals a novel mechanism in locus coeruleus neurons caused by the loss of the GPT2 mitochondrial enzyme that is implicated in the development and progression of neurodegenerative diseases.

The locus coeruleus is among the first brain regions to degenerate in Alzheimer’s and Parkinson’s disease, physicians and scientists have known. But why this area is so vulnerable is less understood.

While continuing their exploration of a rare neurogenetic disorder, a team of Brown University researchers discovered explanations that shed light on this important question.

In the journal Neurobiology of Disease, the researchers report a novel mechanism of degeneration in the locus coeruleus neurons caused by the loss of a mitochondrial enzyme, GPT2, which is implicated in the neurological disorder on which the researchers are focused.

“These findings represent a new direction of research on this really important part of the brain,” said study author Dr. Eric Morrow, a professor of biology, neuroscience, psychiatry and human behavior at the Warren Alpert Medical School, and director of Brown University’s Center for Translational Neuroscience.

Located in the brainstem, the locus coeruleus is a critical area that houses a major source of neurons, providing the neurotransmitter norepinephrine via projections throughout the brain. Norepinephrine is a common drug target for many disease treatments, Morrow said.

The locus coeruleus is involved in a variety of cognitive processes such as attention, learning, mood, wakefulness and sleep. The death of the neurons in this part of the brain is also implicated in cognitive diseases such as Alzheimer’s and Parkinson’s.

In recent years, the locus coeruleus has become an area of widespread and intense research interest, Morrow said. Yet his team did not originally endeavor to study this part of the brain in its experiments.

“That’s one of the things that makes this discovery so exciting,” Morrow said. “This was a completely serendipitous finding that, frankly, could have been missed. This is an example of how research focusing on genetic information can teach us previously unforeseen lessons about the brain.”

The team, which included Brown neuroscience graduate student Ozan Baytas, had been investigating how a specific genetic mutation is implicated in a rare, neurogenetic disorder called GPT2 Deficiency—a genetic syndrome that the Morrow lab first reported in 2016.

The gene of interest is called GPT2 (Glutamate Pyruvate Transaminase 2), and it generates an enzyme that is vital to metabolic pathways in mitochondria, the energy centers of cells.

After introducing the mutation into the metabolic gene in lab mice to study GPT2 Deficiency, the researchers discovered that this loss of mitochondrial enzyme caused the locus coeruleus to degenerate relatively early and selectively in the lifespan of the mouse.

The GPT2 enzyme regulates neuronal growth through replenishment of tricarboxylic acid cycle intermediates and the modulation of amino acid metabolism.

In mice that do not have the GPT2 enzyme, the researchers observed an early loss of neurons in the locus coeruleus, as well as other signs of degeneration, such as deficiency in protein synthesis and stunted cell growth.

A specific part of the work involved the electrophysiology of neurons. Those experiments were performed in the laboratory of co-author Julie Kauer, then at Brown and now professor of psychiatry and behavioral sciences at Stanford University. 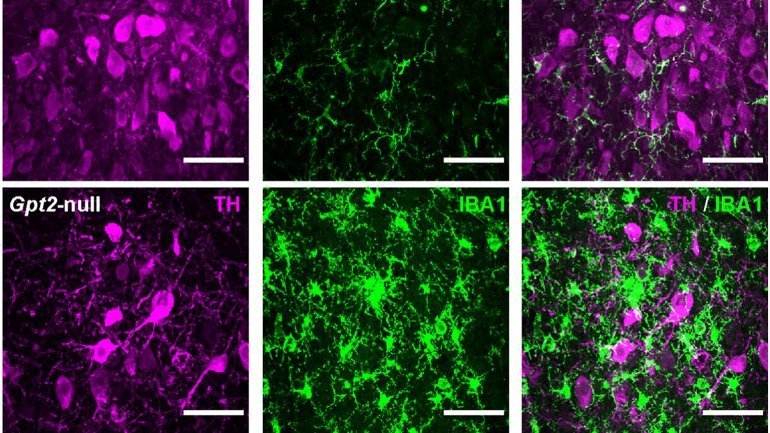 Images from the paper show indicators of neurodegeneration in the locus coeruleus part of the brain. This is reflected by purple neurons surrounded by activated green glial cells in the animal model of GPT2 Deficiency (“GPT2-null”). Credit: Brown University

“Our results suggest that altered metabolism may be the initial driving force for neurodegeneration in locus coeruleus,” said lead study author Baytas.

“Pinpointing the exact causes of this degeneration may inform us of the mechanisms of disease in the locus coeruleus that we can correct, or better still prevent, in order to stop dementia and related behavioral conditions.

“The findings in our mouse model of a neurometabolic disease open up a new outlook on neurodegeneration of locus coeruleus and encourage further research on metabolic susceptibility of these neurons.”

Because of the focus on the locus coeruleus in the development of drug treatments, Morrow said this finding about the early impairment of this brain region will have interest to a broad range of people in the neuroscience and neuropsychiatric community.

The hope, he added, is that these studies will eventually culminate in therapeutic targets for Alzheimer’s disease and other neurodegenerative diseases.

Locus coeruleus (LC) is among the first brain areas to degenerate in Alzheimer’s disease and Parkinson’s disease; however, the underlying causes for the vulnerability of LC neurons are not well defined.

Here we report a novel mechanism of degeneration of LC neurons caused by loss of the mitochondrial enzyme glutamate pyruvate transaminase 2 (GPT2). GPT2 Deficiency is a newly-recognized childhood neurometabolic disorder.

Neuron loss is accompanied by selective, prominent microgliosis and astrogliosis in LC. We observe reduced noradrenergic projections to and norepinephrine levels in hippocampus and spinal cord.

These data are consistent with a possible mechanism involving deficiency in protein synthesis and cell growth, associated subsequently with abnormal autophagy and neurodegeneration.

As compared to the few genetic animal models with LC degeneration, loss of LC neurons in Gpt2-null mice is developmentally the earliest. Early neuron loss in LC in a model of human neurometabolic disease provides important clues regarding the metabolic vulnerability of LC and may lead to new therapeutic targets.