Summary: Neurons in the suprachiasmatic nucleus coordinate to adapt to different lengths of daylight, changing at cellular and network levels. The neurons changed in mix and expression of dopamine, altering brain activity and subsequently daily routine behaviors.

Seasonal changes in light—longer days in summer, shorter in winter—have long been associated with human behaviors, affecting everything from sleep and eating patterns to brain and hormonal activity.

Seasonal affective disorder (SAD) is a prime example: A type of depression related to diminished exposure to natural sunlight, typically occurring during winter months and more often at higher latitudes when daylight hours are shortest.

Bright light therapy has proven an effective remedy for treating SAD, plus maladies such as non-seasonal major depression, postpartum depression and bipolar disorder, but how seasonal changes in day length and light exposure affect and alter the brain at the cellular and circuit levels has kept scientists largely in the dark.

In a new study, published September 2, 2022, in Science Advances, researchers at University of California San Diego School of Medicine used a mouse model to illuminate a process in which affected neurons switch expression of neurotransmitters in response to day length stimuli, triggering related behavioral changes.

The work was led by senior study author Davide Dulcis, Ph.D., associate professor in the Department of Psychiatry at UC San Diego School of Medicine and a member of the Center for Circadian Biology at UC San Diego.

Tucked within the hypothalamus of the human brain is a small structure called the suprachiasmatic nucleus (SCN), each consisting of approximately 20,000 neurons. (The average human brain contains roughly 86 billion neurons and another 85 billion non-neuronal cells.)

The SCN is the body’s timekeeper, regulating most circadian rhythms—physical, mental and behavioral changes that follow a 24-hour cycle and affect everything from metabolism and body temperature to when hormones are released.

The SCN operates based on input from specialized photosensitive cells in retina, which communicate changes in light and day length to our body.

In the new study, Dulcis and colleagues describe how SCN neurons coordinate with each other to adapt to different lengths of daylight, changing at cellular and network levels. Specifically, they found that in mice, whose brains function similarly to humans, the neurons changed in mix and in expression of key neurotransmitters that, in turn, altered brain activity and subsequent daily behaviors. 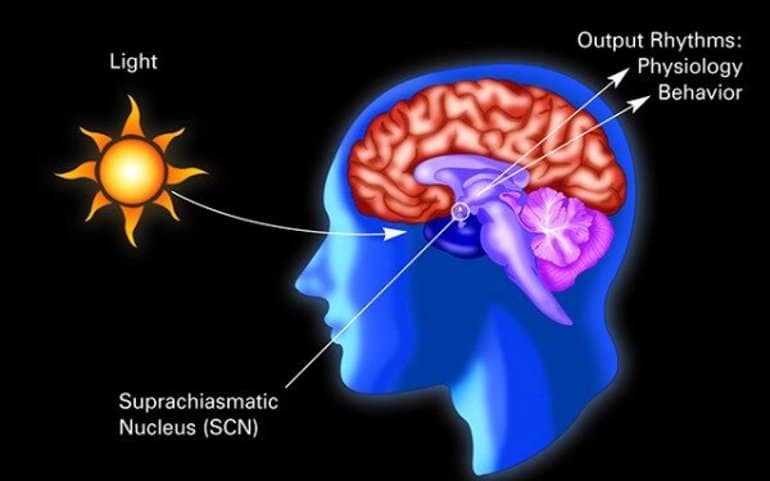 In this schematic, sunlight cues neuronal signals in the suprachiasmatic nucleus, the brain’s master clock, which in turn coordinates biological clocks regulating functions throughout the body, and consequential behaviors. Credit: National Institute of General Medical Sciences

Seasonal changes in light exposure have also been shown to alter the number of neurotransmitter-expressing neurons in the paraventricular nucleus (PVN), a region of the brain that plays essential roles in controlling stress, metabolism, growth, reproduction, immune and other autonomic functions.

“The most impressive new finding in this study is that we discovered how to artificially manipulate the activity of specific SCN neurons and successfully induce dopamine expression within the hypothalamic PVN network,” said Dulcis.

“The multi-synaptic neurotransmitter switching we showed in this study might provide the anatomical/functional link mediating the seasonal changes in mood and the effects of light therapy.”

Seasonal variations in SCN and PVN neurotransmitter expression have been observed in humans and animal models. However, the molecular mechanisms by which the SCN-PVN network responds to altered photoperiod is unknown.

Our findings reveal previously unidentified molecular adaptations of the SCN-PVN network in response to seasonality and the role for NMS neurons in adjusting hypothalamic function to day length via a coordinated multisynaptic neurotransmitter switching affecting behavior.