Summary: Greater impairment of the prefrontal cortex-habenula pathway was correlated with earlier age of first drug use.

White matter in the brain that was previously implicated in animal studies has now been suggested to be specifically impaired in the brains of people with addiction to cocaine or heroin, according to a study conducted by researchers from the Icahn School of Medicine at Mount Sinai and Baylor College of Medicine.

The study was published October 6 in Neuron.

The study looked at the connectivity of the tract between the prefrontal cortex (PFC), a brain region critical for regulating higher-order executive functions, and the habenula, a region that plays a critical role in reward and reward-associated learning.

The habenula has emerged as a key driver of drug-seeking behaviors in animal models of addiction. Specifically, signaling from the PFC to the habenula is disrupted in rodent cocaine addiction models, implicating this PFC-habenula circuit in withdrawal and cue-induced relapse behaviors.

However, until now, the PFC-habenula path has remained poorly understood in the human brain. Furthermore, its involvement in the neuropathological effects of drugs other than cocaine has not been previously explored.

For the first time in the human brain, a team led by Rita Z. Goldstein, PhD, and Junqian Xu, PhD, used diffusion magnetic resonance imaging (MRI) tractography to investigate the microstructural features of the PFC-habenula circuit in people with cocaine or heroin addiction compared to healthy control participants. 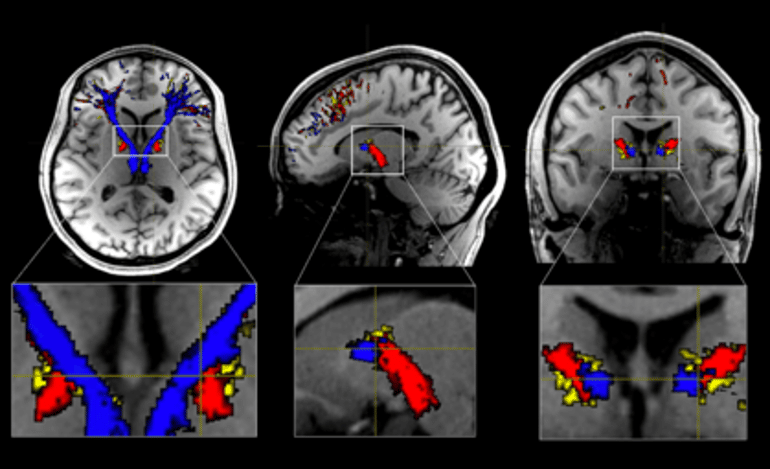 “In addition to identifying microstructural differences, specifically reduced coherence in the orientation of the white matter fibers in the cocaine-addicted group that comprised both current cocaine users and those with short-term abstinence, we extended results beyond cocaine (a stimulant) to heroin (an opioid), suggesting that abnormalities in this path may be generalized in addiction,” said Sarah King, a PhD student in Neuroscience in the Graduate School of Biomedical Sciences at Icahn Mount Sinai, who led the analyses and is first author of the paper.

“Importantly, we found that across all addicted individuals, greater impairment was correlated with earlier age of first drug use, which points to a potential role for this circuit in developmental or premorbid risk factors.”

The results advance ongoing research in the field by targeting a previously unexplored circuit in the pathophysiology of addiction in humans, where deficits may predispose an individual to both the development of drug addiction and to relapse and which may be potentially amenable for individually tailored treatment or prevention efforts.

The habenula (Hb) is central to adaptive reward- and aversion-driven behaviors, comprising a hub for higher-order processing networks involving the prefrontal cortex (PFC).

Despite an established role in preclinical models of cocaine addiction, the translational significance of the Hb and its connectivity with the PFC in humans is unclear.

Abnormalities in this tract further generalized to an independent sample of heroin-addicted individuals and were associated, in an exploratory analysis, with earlier onset of drug use across the addiction subgroups, potentially serving as a predisposing marker amenable for early intervention.

Importantly, these findings contextualize a plausible PFC-Hb circuit in the human brain, supporting preclinical evidence for its impairment in cocaine addiction.