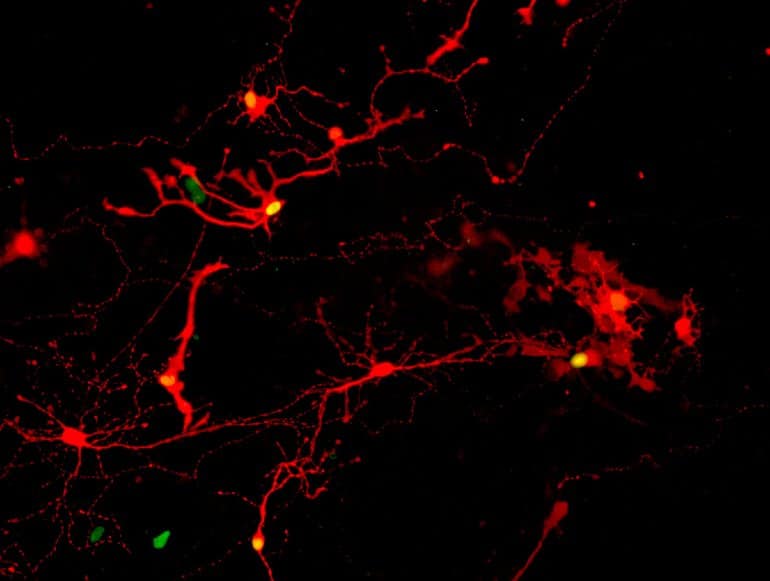 Summary: Lab-created retinal cells created from human stem cells can reach out and connect to neighboring cells, a new study reports. The cells have the capacity to replace damaged retinal cells and carry sensory information. The findings could pave the way for clinical trials for the treatment of a range of diseases associated with vision loss and blindness.

Retinal cells grown from stem cells can reach out and connect with neighbors, according to a new study, completing a “handshake” that may show the cells are ready for trials in humans with degenerative eye disorders.

Over a decade ago, researchers from the University of Wisconsin-Madison developed a way to grow organized clusters of cells, called organoids, that resemble the retina, the light-sensitive tissue at the back of the eye.

They coaxed human skin cells reprogrammed to act as stem cells to develop into layers of several types of retinal cells that sense light and ultimately transmit what we see to the brain.

“We wanted to use the cells from those organoids as replacement parts for the same types of cells that have been lost in the course of retinal diseases,” says David Gamm, the UW-Madison ophthalmology professor and director of the McPherson Eye Research Institute whose lab developed the organoids.

“But after being grown in a laboratory dish for months as compact clusters, the question remained—will the cells behave appropriately after we tease them apart? Because that is key to introducing them into a patient’s eye.”

During 2022, Gamm and UW-Madison collaborators published studies showing that dish-grown retinal cells called photoreceptors respond like those in a healthy retina to different wavelengths and intensities of light, and that once they are separated from adjacent cells in their organoid, they can reach out toward new neighbors with characteristic biological cords called axons.

“The last piece of the puzzle was to see if these cords had the ability to plug into, or shake hands with, other retinal cell types in order to communicate,” says Gamm, whose new results on successful connections between the cells will be published this week in the Proceedings of the National Academy of Sciences.

Cells in the retina and brain communicate across synapses, tiny gaps at the tips of their cords. To confirm that their lab-grown retinal cells have the capacity to replace diseased cells and carry sensory information like healthy ones, the researchers needed to show that they could make synapses.

Xinyu Zhao, UW-Madison professor of neuroscience and co-author of the new study, worked with the Gamm lab’s cells to help study their ability to form synaptic connections. They did this using a modified rabies virus to identify pairs of cells that could form the means to communicate with one another.

The research team, including graduate students and co-first-authors Allison Ludwig and Steven Mayerl, broke apart the retinal organoids into individual cells, gave them a week to extend their axons and make new connections, exposed them to the virus, and then took a peek. What they saw were many retinal cells marked by a fluorescent color indicating a rabies infection had infected one across a synapse successfully formed between neighbors.

“We’ve been quilting this story together in the lab, one piece at a time, to build confidence that we’re headed in the right direction,” says Gamm, who patented the organoids and co-founded Madison-based Opsis Therapeutics, which is adapting the technology to treat human eye disorders based on the UW-Madison discoveries.

Proof of synapses connecting pairs of retinal cells derived from human pluripotent stem cells comes from the red coloring of infection by a modified rabies virus passed from one cell with a yellow nucleus across the synapse to a cell that glows only red. Credit: UW-Madison / Gamm Laboratory.

“It’s all leading, ultimately, to human clinical trials, which are the clear next step.”

After they confirmed the presence of synaptic connections, the researchers analyzed the cells involved and found that the most common retinal cell types forming synapses were photoreceptors—rods and cones—which are lost in diseases like retinitis pigmentosa and age-related macular degeneration, as well as in certain eye injuries. The next most common cell type, retinal ganglion cells, are degenerate in optic nerve disorders like glaucoma.

“That was an important revelation for us,” says Gamm. “It really shows the potentially broad impact these retinal organoids could have.”

The ability of these lab-grown retinal neurons to form new synaptic connections after dissociation from ROs is key to building confidence in their capacity to restore visual function.

However, direct evidence of reestablishment of retinal neuron connectivity via synaptic tracing has not been reported to date.

Used in this manner, in vitro synaptic tracing is envisioned to complement traditional preclinical animal model testing, which is limited by evolutionary incompatibilities in synaptic machinery inherent to human xenografts.

I wonder which one comes first , this or fusion energy