In the study, the researchers examined how traffic noise and birdsong affect mood, paranoia, and cognitive functioning by carrying out a randomized online experiment with 295 participants.

These heard six minutes of either typical traffic noise or birdsong with varying numbers of different traffic sounds or birdsongs. Before and after hearing the sound clips, the participants filled in questionnaires assessing their mental health and performed cognitive tests.

“Everyone has certain psychological dispositions. Healthy people can also experience anxious thoughts or temporary paranoid perceptions. The questionnaires enable us to identify people’s tendencies without their having a diagnosis of depression, anxiety, and paranoia and to investigate the effect of the sounds of birds or traffic on these tendencies,” says first author Emil Stobbe, Predoctoral Fellow at the Lise Meitner Group for Environmental Neuroscience at the Max Planck Institute for Human Development.

The present study suggests that listening to birdsong reduces anxiety and paranoia in healthy participants. Birdsong did not appear to have an influence on depressive states in this experiment. Traffic noise, however, generally worsened depressive states, especially if the audio clip involved many different kinds of traffic sounds.

The positive influence of birdsong on mood is already known, but to the best of the authors‘ knowledge, this study is the first to reveal an effect on paranoid states. This was independent of whether the birdsong came from two or more different bird species.

The researchers also found that neither birdsong nor traffic noise influenced cognitive performance.

In the researchers‘ view, the explanation for these effects is that birdsong is a subtle indication of an intact natural environment, detracting attention from stressors that could otherwise signal an acute threat.

Taken together, the results suggest interesting avenues for further research and applications, such as the active manipulation of background noise in different situations or the examination of its influence on patients with diagnosed anxiety disorders or paranoia. 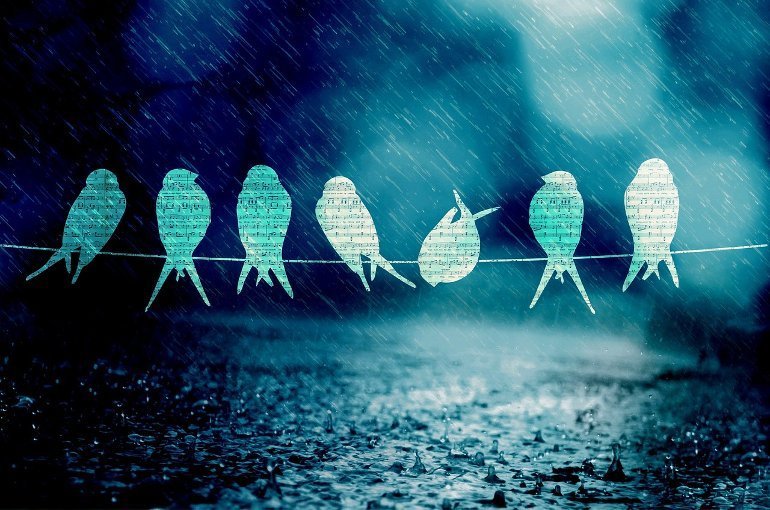 The present study suggests that listening to birdsong reduces anxiety and paranoia in healthy participants. Image is in the public domain

“Birdsong could also be applied to prevent mental disorders. Listening to an audio CD would be a simple, easily accessible intervention. But if we could already show such effects in an online experiment performed by participants on a computer, we can assume that these are even stronger outdoors in nature,” says Stobbe.

He is a member of the Lise Meitner Group for Environmental Neuroscience at the Max Planck Institute for Human Development in Berlin, which studies the effects of the physical environment on the individual.

“We were recently able to perform a study showing that a one-hour walk in nature reduces brain activity associated with stress,” adds the research group’s head Simone Kühn.

“We cannot say yet which features of nature – smells, sounds, color, or a combination thereof – are responsible for the effect. The present study provides a further building block to clarify this issue,” continues Kühn. What is clear is that nature improves mental health and well-being. So, out we go!

The present study investigated the effect of urban (traffic noise) vs. natural (birdsongs) soundscapes on mood, state paranoia, and cognitive performance, hypothesizing that birdsongs lead to significant improvements in these outcomes.

An additional goal was to explore the differential impact of lower vs. higher diversity of the soundscapes by manipulating the number of different typical traffic sounds or songs of different bird species within the respective soundscapes.

In a randomized online experiment, N = 295 participants were exposed to one out of four conditions for 6 min: traffic noise low, traffic noise high, birdsong low, and birdsong high diversity soundscapes.

Before and after the exposure, participants performed a digit-span and dual n-back task, and filled out depression, anxiety, and paranoia questionnaires. The traffic noise soundscapes were associated with a significant increase in depression (small effect size in low, medium effect size in high diversity condition).

For cognition, no effects were observed. In sum, the present study suggests that listening to birdsongs regardless of diversity improves anxiety, while traffic noise, also regardless of diversity, is related to higher depressiveness. Moreover, for the first time, beneficial, medium-sized effects of birdsong soundscapes were demonstrated, reducing paranoia.

Overall, the results bear interesting implications for further research, such as actively manipulating soundscapes in different environments or settings (e.g., psychiatric wards) and testing their effect on subclinical or even clinical manifestations of anxiety and paranoia.

What’s in a Name? Actors Suppress Their Sense of Self When Playing New Character – Neuroscience News