Summary: Study reports that age-related loss of the Y chromosome in men is linked to heart muscle scarring and an increased risk of heart failure. The findings may explain why men tend to die, on average, seven years younger than women.

The loss of the male sex chromosome as many men age causes the heart muscle to scar and can lead to deadly heart failure, new research from the University of Virginia School of Medicine shows. The finding may help explain why men die, on average, several years younger than women.

The drug, he suspects, may help counteract the harmful effects of the chromosome loss—effects that may manifest not just in the heart but in other parts of the body as well.

On average, women live five years longer than men in the United States. The new finding, Walsh estimates, may explain nearly four of the five-year difference.

“There are more than 160 million males in the United States alone. The years of life lost due to the survival disadvantage of maleness is staggering. This new research provides clues as to why men have shorter lifespans than women.”

While women have two X chromosomes, men have an X and a Y. But many men begin to lose their Y chromosome in a fraction of their cells as they age. This appears to be particularly true for smokers.

The loss occurs predominantly in cells that undergo rapid turnover, such as blood cells. (Loss of the Y chromosome does not occur in male reproductive cells, so it is not inherited by the children of men who exhibit Y chromosome loss.)

Scientists previously observed that men who suffer Y chromosome loss are more likely to die at a younger age and suffer age-associated maladies such as Alzheimer’s disease. Walsh’s new research, however, is believed to be the first hard evidence that the chromosome loss directly causes harmful effects on men’s health.

Walsh, of UVA’s Division of Cardiovascular Medicine and the Robert M. Berne Cardiovascular Research Center, and his team used cutting-edge CRISPR gene-editing technology to develop a special mouse model to better understand the effects of Y chromosome loss in the blood.

They found that the loss accelerated age-related diseases, made the mice more prone to heart scarring and led to earlier death.

This wasn’t the result of just inflammation, the scientists determined. Instead, the mice suffered a complex series of responses in the immune system, leading to a process referred to as fibrosis throughout the body. This tug-of-war within the immune system, the researchers believe, may accelerate disease development. 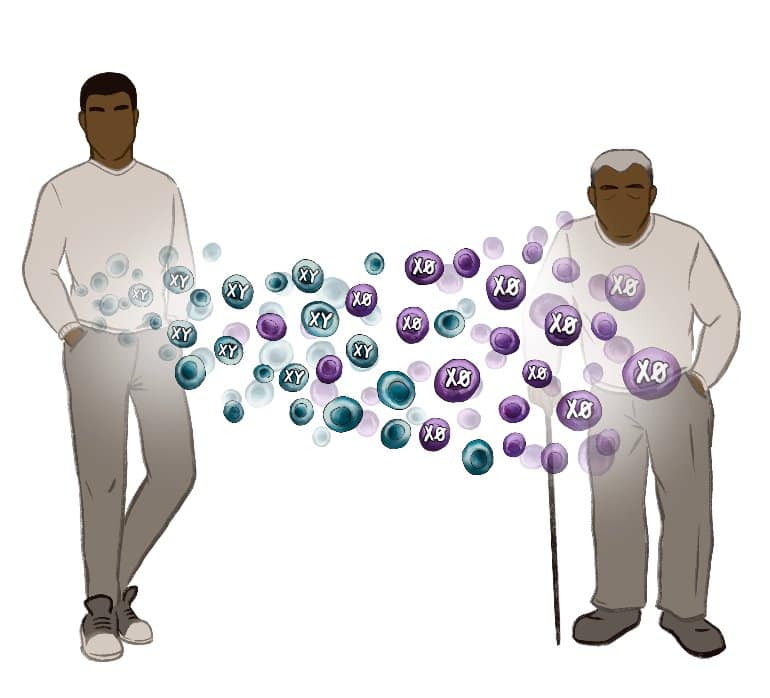 Men progressively lose their Y chromosome as they age — and that could be taking a toll on their health. Credit: Katriel E. Cho

Walsh notes that one potential treatment option might be a drug, pirfenidone, that has already been approved by the federal Food and Drug Administration for the treatment of idiopathic pulmonary fibrosis, a form of lung scarring. The drug is also being tested for the treatment of heart failure and chronic kidney disease, two conditions for which tissue scarring is a hallmark.

Based on his research, Walsh believes that men with Y chromosome loss could respond particularly well to this drug, and other classes of antifibrotic drugs that are being developed, though more research will be needed to determine that.

At the moment, doctors have no easy way to determine which men suffer Y chromosome loss. Walsh’s collaborator Lars A. Forsberg, of Uppsala University in Sweden, has developed an inexpensive polymerase chain reaction (PCR) test, like those used for COVID-19 testing, that can detect Y chromosome loss, but the test is largely confined to his and Walsh’s labs.

Walsh, however, can foresee that changing: “If interest in this continues and it’s shown to have utility in terms of being prognostic for men’s disease and can lead to personalized therapy, maybe this becomes a routine diagnostic test,” he said.

“The DNA of all our cells inevitably accumulate mutations as we age. This includes the loss of the entire Y chromosome within a subset of cells within men. Understanding that the body is a mosaic of acquired mutations provides clues about age-related diseases and the aging process itself,” said Walsh, a member of UVA’s Department of Biochemistry and Molecular Genetics.

“Studies that examine Y chromosome loss and other acquired mutations have great promise for the development of personalized medicines that are tailored to these specific mutations.”

Hematopoietic mosaic loss of Y chromosome (mLOY) is associated with increased risk of mortality and age-related diseases in men, but the causal and mechanistic relationships have yet to be established.

A prospective study revealed that mLOY in blood is associated with an increased risk for cardiovascular disease and heart failure–associated mortality.

Together, these results indicate that hematopoietic mLOY causally contributes to fibrosis, cardiac dysfunction, and mortality in men.