Summary: Mindful meditation can produce a healthy altered state of consciousness in the treatment of those with addiction problems.

New research from the University of Utah finds that a mindfulness meditation practice can produce a healthy altered state of consciousness in the treatment of individuals with addictive behaviors.

Not unlike what one might experience under the influence of psychedelic drugs—achieving this altered state through mindful meditation has the potential lifesaving benefit of decreasing one’s addictive behaviors by promoting healthy changes to the brain.

The findings come from the largest neuroscience study to date on mindfulness as a treatment for addiction.

The study, published in the journal Science Advances, provides new insight into the neurobiological mechanisms by which mindfulness treats addiction. Study findings provide a promising, safe and accessible treatment option for the more than 9 million Americans misusing opioids.

Garland’s study builds on previous research measuring the positive effects of theta waves in the human brain. Researchers have found that individuals with low theta waves tend to experience a wandering mind, trouble concentrating or they ruminate on thoughts about themselves.

Theta waves can best be viewed on electroencephalogram, or EEG, scans of the frontal midline regions of their brains. Low theta waves result in a loss of self-control as the brain slips into its default mode of automatic habits. In contrast, when a person is focused, present and fully absorbed in a task, EEG scans will show increased frontal midline theta wave activity.

Garland’s new study showed it is in this mindful, theta wave state that people begin to experience feelings of self-transcendence and bliss, and the brain changes in ways that actually reduce one’s addictive behaviors.

Garland’s research team recruited 165 adults with long-term opioid use for the study. Participants were randomly placed into either the control group that participated in supportive group psychotherapy or the experimental group taught to incorporate Mindfulness-Oriented Recovery Enhancement (MORE) into their daily lives.

Before and after the eight weeks of study treatment, all participants were brought into the research lab and had their brain waves measured with EEG while they were asked to try to practice mindfulness meditation. Participants were assessed for opioid misuse for nine months after the treatment ended.

MORE is an eight-week, mindfulness-based therapy created by Garland to treat addiction, pain and emotional distress by promoting self-awareness and self-regulation of automatic and addictive habits.

In a large clinical trial recently published in Science Advances, MORE was shown to reduce opioid misuse by 45%, more than doubling the effect of standard therapy.

Participants showed more than twice as much frontal midline theta brain activity following treatment with MORE, whereas those in supportive therapy showed no increase in theta. 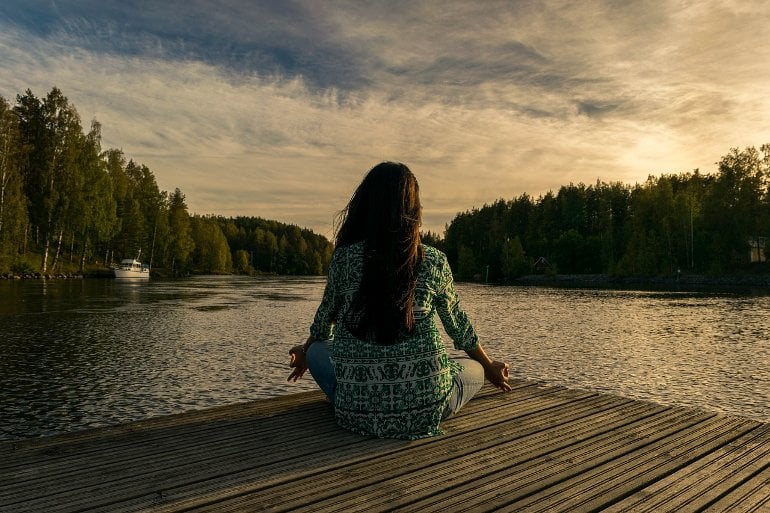 Garland’s new study showed it is in this mindful, theta wave state that people begin to experience feelings of self-transcendence and bliss, and the brain changes in ways that actually reduce one’s addictive behaviors. Image is in the public domain

Participants in MORE who showed the biggest increases in theta waves reported more intense experiences of self-transcendence during meditation, including the sense of one’s ego fading away, a sense of oneness with the universe or feelings of blissful energy and love.

Garland explained that by achieving “tastes of self-transcendence” through meditation, mindfulness therapy boosted theta waves in the frontal lobes of the brain to help participants gain self-control over their addictive behaviors.

“Mindfulness can create a pathway for us to transcend our limited sense of self,” said Garland. “Civilizations have known for thousands of years that self-transcendence, the experience of being connected to something greater than ourselves, has powerful therapeutic benefits.”

This, he explained, is a part of why some cultures engage in spiritual practices, practice deep meditation or use psychedelic substances like psilocybin mushrooms.

Even in the popular 12-step addiction treatment program, the 11th step—seeking conscious contact with a higher power through prayer or meditation—taps into this same mechanism to promote recovery from addiction.

The state of transcendence can be like a blissful, natural high, said Garland. “Rather than seeking a high from something outside of yourself like a drug, meditation can help you to find an even greater sense of pleasure, peace and fulfillment from within.”

Mindfulness is an efficacious self-regulatory practice for treating addiction, but little is known about the mechanisms by which mindfulness reduces addictive behavior. In this mechanistic study of long-term opioid users (N = 165), we assessed meditation-induced FMΘ as a mediator of changes in opioid misuse.