Summary: Changes in observed phatic behaviors, such as movements or vocal pitch during music interaction therapy could provide markers for a person’s mental state and help therapists to diagnose and monitor depression in patients.

Researchers have proposed a new way of harnessing music therapy for the diagnosis, assessment and monitoring of depression.

The study, by researchers at the University of York and the Royal College of Music, focused on the significance of “phatic” behaviors in improvisational music therapy—a form of therapy during which a client and a therapist interact by making music together.

Phatic behaviors in conversation can include small-talk, interjections and gestures which put the other person at ease and strengthen social bonds and understanding. These behaviors can change during depression in a range of ways such as longer pauses within a speaker’s turn, a drop in rate of speech, an overall fall in vocal pitch and a reduction in eye contact.

Changes observed in behavior, such as vocal pitch and physical movements, during these musical interactions could provide identifiable and robust markers of an individual’s mental state and help therapists to diagnose and monitor depression in clients.

Dr. Sarah Knight, from the University’s Department of Psychology, said, “Under the blanket term of depression, people have very different needs and manifestations. We wanted to find a way to trace change over time both for different client groups and for therapists from a range of backgrounds. 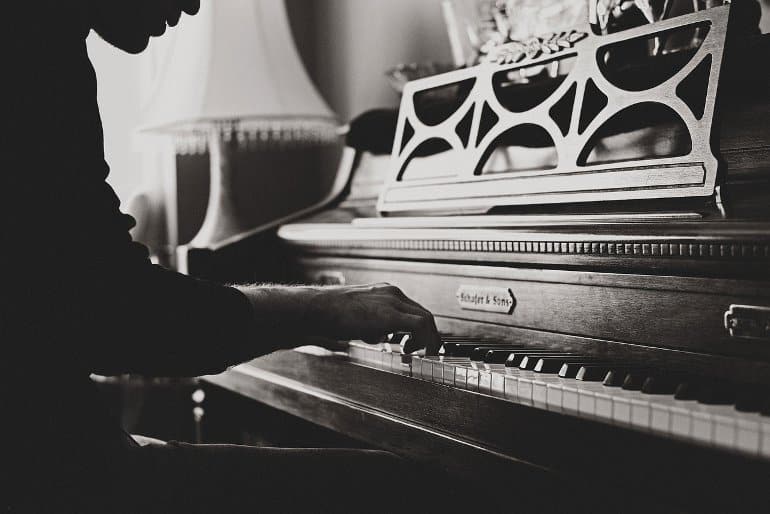 Changes observed in behavior, such as vocal pitch and physical movements, during these musical interactions could provide identifiable and robust markers of an individual’s mental state and help therapists to diagnose and monitor depression in clients. Image is in the public domain

“We are hopeful this approach of monitoring changes in a systematic way is something that could be applied more generally as part of the framework of care that therapists provide.”

Dr. Neta Spiro, from the Royal College of Music, said, “We propose that this approach could lead to a useful tool that would complement the interpersonal and individualized care at the heart of music therapy.”

The researchers acknowledge that more work is needed before this approach could be implemented, particularly detailed exploration of behavioral data and rigorous testing, but they point out that smartphones and other digital devices make it possible to capture and analyze relevant behaviors, such as vocal pitch and physical movement, without investing in sophisticated recording equipment.

Tracing change during music therapy for depression: Toward a markers-based understanding of communicative behaviors

This article focuses on behavioral markers—changes in communicative behaviors that reliably indicate the presence and severity of mental health conditions.

We explore the potential of behavioral markers to provide new insights and approaches to diagnosis, assessment, and monitoring, with a particular focus on music therapy for depression.

We propose a framework for understanding these markers that encompasses three broad functional categories fulfilled by communicative behaviors: semantic, pragmatic, and phatic.

The disordered interactions observed in those with depression reflect changes in many types of communicative behavior, but much research has focused on pragmatic behaviors.

However, changes in phatic behaviors also seem likely to be important, given their crucial role in facilitating interpersonal relationships. Given the strong phatic element of music-making, music represents a fertile context in which to explore these behaviors.

We argue here that the uniquely multimodal and profoundly interactive environment of music therapy in particular allows for the identification of changes in pragmatic and phatic communicative behaviors that reliably indicate depression presence/severity.

By identifying these behavioral markers, we open the door to new ways of assessing depression, and improving diagnosis and monitoring.

Furthermore, this markers-based approach has broad implications, being applicable beyond depression and beyond music therapy.