Summary: A new predictive model is able to determine who will change their minds about contentious scientific information when presented with evidence-based research.

A new kind of predictive network model could help determine which people will change their minds about contentious scientific issues when presented with evidence-based information.

A study in Science Advances presents a framework to accurately predict if a person will change their opinion about a certain topic. The approach estimates the amount of dissonance, or mental discomfort, a person has from holding conflicting beliefs about a topic.

They then used this cognitive network model to predict how the beliefs of a group of nearly 1,000 people, who were at least somewhat skeptical about the efficacy of genetically modified foods and childhood vaccines, would change as the result of an educational intervention.

Study participants were shown a message about the scientific consensus on genetic modification and vaccines. Those who began the study with a lot of dissonance in their interwoven network of beliefs were more likely to change their beliefs after viewing the messaging, but not necessarily in accordance with the message. On the other hand, people with little dissonance showed little change following the intervention. 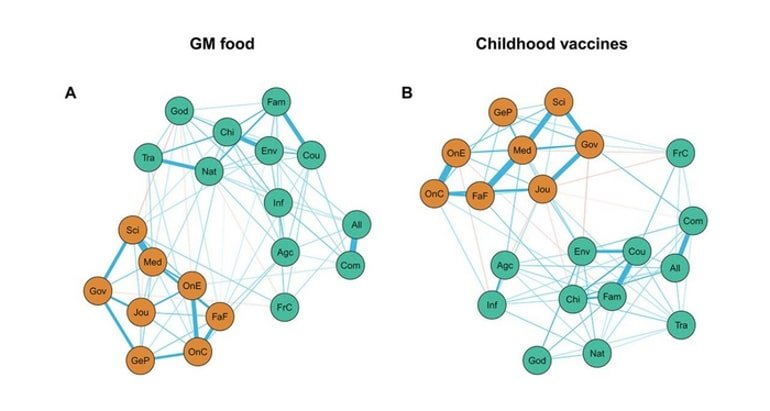 Belief networks and development of interdependence over measurements. Credit: Jonas Dalege and Tamara van der Does

“For example, if you believe that scientists are inherently trustworthy, but your family and friends tell you that vaccines are unsafe, this is going to create some dissonance in your mind,” van der Does says.

“We found that if you were already kind of anti-GM foods or vaccines to begin with, you would just move more towards that direction when presented with new information even if that wasn’t the intention of the intervention.”

While still in an early stage, the research could ultimately have important implications for communicating scientific, evidence-based information to the public.

“On the one hand you might want to target people who have some dissonance in their beliefs, but at the same time this also creates some danger that they will reduce their dissonance in a way that you didn’t want them to,” Dalege says.

“Moving forward, we want to expand this research to see if we can learn more about why people take certain paths to reduce their dissonance.”

Skepticism toward childhood vaccines and genetically modified food has grown despite scientific evidence of their safety. Beliefs about scientific issues are difficult to change because they are entrenched within many interrelated moral concerns and beliefs about what others think.

We propose a cognitive network model that estimates network ties between all interrelated beliefs to calculate the overall dissonance and interdependence.

We show the advantages of measuring dissonance using the belief network structure compared to traditional measures.

This study is the first to combine a unifying predictive model with an experimental intervention and to shed light on the dynamics of dissonance reduction leading to belief change.