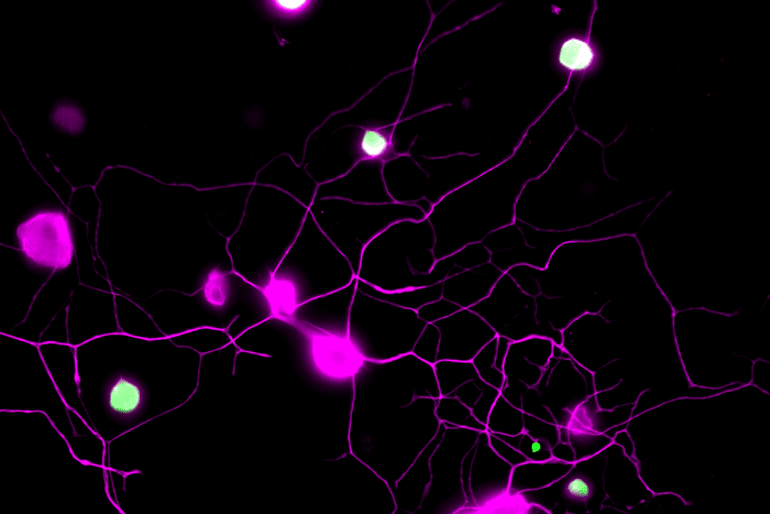 Summary: Repurposing drugs used in the treatment of lung cancer could offer hope for symptom relief for patients suffering from chronic pain.

Pain is an important alarm system that alerts us to tissue damage and prompts us to withdraw from harmful situations. Pain is expected to subside as injuries heal, but many patients experience persistent pain long after recovery.

The work was spearheaded by an international team of researchers at IMBA – Institute of Molecular Biotechnology of the Austrian Academy of Sciences, Harvard Medical School, and Boston Children’s Hospital.

Their findings of the research, conducted in laboratory mouse models, open up multiple therapeutic opportunities that could allow the world to improve chronic pain management and eclipse the opioid epidemic.

Acute pain is an important danger signal. By contrast, chronic pain is based on persistent injury and can even be experienced in the absence of a stimulus, injury, or disease. Despite the hundreds of millions of people affected, chronic pain is among the least well-managed areas of healthcare.

To improve how persistent pain is managed and considering the raging opioid crisis, it is paramount to develop novel drugs based on a fundamental understanding of the underlying mechanisms.

“We had previously shown that sensory neurons produce a specific metabolite, BH4, which then drives chronic pain, such as neuropathic pain or inflammatory pain,” says project lead and co-corresponding author Shane Cronin, a staff scientist in the Penninger lab at IMBA and a former postdoc in the Woolf lab at Harvard Medical School and F.M. Kirby Neurobiology Center, Boston Children’s Hospital.

“The concentrations of BH4 correlated very well with the pain intensity. So, we naturally thought that this was a great pathway to target.”

To identify drugs that reduce BH4 levels in pain neurons, the researchers performed a “phenotypic screen” of 1000 target-annotated, FDA-approved medications. This approach allowed the scientists to start their search using medications that are currently in use for various indications, and to identify undescribed, off-target analgesic properties.

Among the first findings of this hypothesis-driven search, the team was able to link the previously observed analgesic effects of several drugs, including clonidine and capsaicin, to the BH4 pathway.

“However, our phenotypic screen also allowed us to ‘repurpose’ a surprising drug,” says Cronin. The drug ‘fluphenazine’, an antipsychotic, has been used to treat schizophrenia. “We found that fluphenazine blocks the BH4 pathway in injured nerves. We also demonstrated its effects in chronic pain following nerve injury in vivo.”

The researchers also found that the effective analgesic dose of fluphenazine in their experiments in the mouse model is comparable to the low end of the doses safely indicated for schizophrenia in humans.

In addition, the screen uncovered a novel and unexpected molecular link between the BH4 pathway and EGFR/KRAS signaling, a pathway involved in multiple cancers. Blocking EGFR/KRAS signaling reduced pain sensitivity by decreasing the levels of BH4.

The genes of EGFR and KRAS are the two most frequently mutated genes in lung cancer, which prompted the researchers to look at BH4 in lung cancer.

Surprisingly, by deleting an important enzyme, GCH1, in the BH4 pathway, the mouse models of KRAS-driven lung cancer developed fewer tumors and survived much longer. Hence, the researchers uncovered a common signaling pathway for chronic pain and lung cancer through EGFR/KRAS and BH4, thus opening up new avenues of treatment for both conditions.

Mouse sensory neurons are shown in magenta. BH4, the molecule driving chronic pain, is shown in green. Hence, the neurons “in pain” are seen in green/white. Credit: Cronin/IMBA

“Chronic pain is currently subjected to often ineffective palliative treatments. Furthermore, effective painkillers such as opioids can lead, if used inappropriately, to severe addiction. It is therefore critical to find and develop new and repurposed drugs to treat chronic pain,” says co-corresponding author Clifford Woolf, professor of neurology and neurobiology at Harvard Medical School and director of the F.M. Kirby Neurobiology Center at Boston Children’s Hospital.

One intriguing aspect of the study is the mechanistic link between pain and lung cancer.

“The same triggers that drive tumor growth appear to be also involved in setting the path to chronic pain, often experienced by cancer patients. We also know that sensory nerves can drive cancer, which could explain the vicious circuit of cancer and pain,” adds co-corresponding author Josef Penninger, IMBA group leader and founding director, who is currently also the director of the Life Sciences Institute at the University of British Columbia (UBC), Vancouver, Canada.

“Understanding these cross-talks is therefore not only critical for cancer treatments but might also help to improve the quality of life for cancer patients towards less pain.”

Increased tetrahydrobiopterin (BH4) generated in injured sensory neurons contributes to increased pain sensitivity and its persistence. GTP cyclohydrolase 1 (GCH1) is the rate-limiting enzyme in the de novo BH4 synthetic pathway, and human single-nucleotide polymorphism studies, together with mouse genetic modeling, have demonstrated that decreased GCH1 leads to both reduced BH4 and pain.

However, little is known about the regulation of Gch1 expression upon nerve injury and whether this could be modulated as an analgesic therapeutic intervention.

We performed a phenotypic screen using about 1000 bioactive compounds, many of which are target-annotated FDA-approved drugs, for their effect on regulating Gch1 expression in rodent injured dorsal root ganglion neurons. From this approach, we uncovered relevant pathways that regulate Gch1 expression in sensory neurons.

Our screen shows that pharmacologic modulation of GCH1 expression and BH4 could be used to develop pharmacological treatments to alleviate pain and identified a critical role for EGFR-regulated GCH1/BH4 expression in neuropathic pain and cancer in rodents.