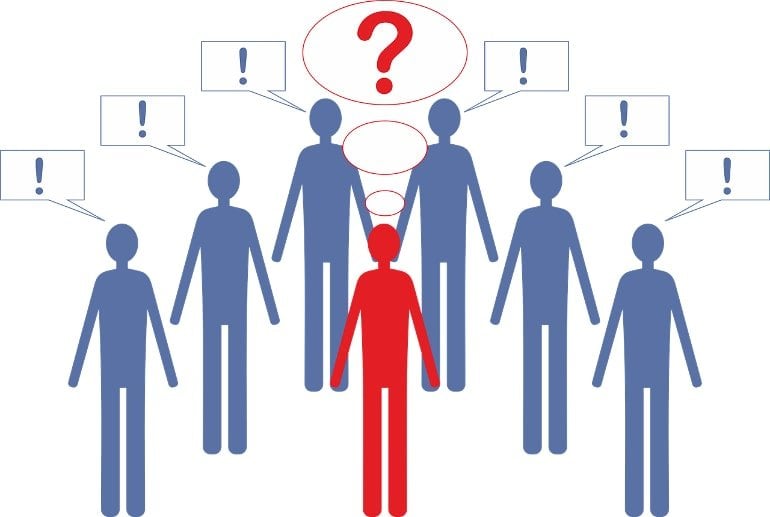 Summary: Those with dark triad or antagonistic personality traits including narcissism, Machiavellianism, and psychopathy are more likely to endorse negative beliefs about others, especially the LGBTQA+ community. People with these personality traits adopt prejudicial beliefs as they downplay the importance of equality and show little interest in protecting others, researchers conclude.

Psychology researchers at the University of Oregon think they are getting closer to knowing whether personality and morality can be used to predict whether people adopt prejudicial beliefs.

Doctoral students Cameron Kay and Sarah Dimakis are interested in identifying the reasons people hold discriminatory beliefs and recently published a study that sheds light on the topic.

In an October Journal of Homosexuality article, “Moral Foundations Partially Explain the Associations of Machiavellianism, Grandiose Narcissism, and Psychopathy with Homonegativity and Transnegativity,” Kay and Dimakis share insights into what types of people harbor prejudice against gay, nonbinary and transgender people, and why.

Across two studies, the researchers found that people high in antagonistic personality traits—Machiavellianism, narcissism and psychopathy—are more likely to endorse negative beliefs about homosexual and transgender people, including the belief that gay men should not be allowed to work with children and that gender affirmation surgery is morally wrong.

“People high in these traits seem to adopt these beliefs because they downplay the importance of equality and are less interested in protecting others,” Kay said.

Kay is a personality psychologist and Dimakis is a social psychologist who focuses on morality, putting the project within their usual scope of research, which often connects concepts within psychology and sociology. Dimakis adds expertise to the project through her interest in moral judgment.

“I’m really interested in why and how we categorize people as good or bad,” Dimakis said, “So, how we observe people’s behavior, make inferences about what they’re thinking, and then use that information to get the sense of who they are, whether they are a good person or someone to avoid.”

While this is not Kay and Dimakis’ first personality-based project, it hasn’t been without its challenges. For Dimakis, a difficulty has been gathering a balanced, representative sample.

For Kay, gathering people with those prejudicial beliefs also has its flip side regarding the ethical restraints of the project.

“I think most people would agree that these beliefs are terrible,” Kay said. “You’re trying to assess these beliefs and you’re having to ask people, ‘Okay, do you believe in this thing?’ It can often be kind of a difficult situation.”

Kay said the findings from the project can help the psychology field develop solid concepts of prejudice and expand the connection between personality and prejudicial beliefs.

“At the broadest level, there is very little conceptualization of prejudice within personality,” Kay said.

“It isn’t really thought of as an aspect of personality. In the past, people have shown that certain personality traits are associated with racism or associated with xenophobia towards immigrants, and this is kind of an additional piece in that puzzle, telling us there is a way we can predict prejudice. It’s through personality.”

Moral Foundations Partially Explain the Associations of Machiavellianism, Grandiose Narcissism, and Psychopathy With Homonegativity and Transnegativity

In the present studies (N1 = 709; N2 = 267), we examined whether people with antagonistic personality traits are also more likely to express homonegative and transnegative attitudes, and, if so, whether this can be explained by their endorsement of the moral foundations.

We found that people high in Machiavellianism, grandiose narcissism, and psychopathy are more likely to endorse homonegative and transnegative views.

The associations of Machiavellianism and psychopathy with homonegativity and transnegativity were primarily explained by low endorsement of individualizing moral foundations (i.e., care and fairness), while the association of narcissism with these beliefs was primarily explained by high endorsement of the binding moral foundations (i.e., loyalty, authority, and purity).

These findings provide insight into the types of people who harbor homonegative and transnegative attitudes, and how differences in moral foundations contribute to these associations.