Summary: Positive exposure to blue spaces, such as spending time playing at coastal locations or at lakes, during childhood is associated with a greater sense of well-being later in life.

New research based on data from 18 countries concludes that adults with better mental health are more likely to report having spent time playing in and around coastal and inland waters, such as rivers and lakes (also known collectively as blue spaces) as children. The finding was replicated in each of the countries studied.

Mounting evidence shows that spending time in and around green spaces such as parks and woodlands in adulthood is associated with stress reduction and better mental health. However, we know far less about the benefits of blue spaces, or the role childhood contact has in these relationships in later life.

Data came from the BlueHealth International Survey (BIS), a cross-sectional survey co-ordinated by the University of Exeter’s European Centre for Environment and Human Health. The current analysis used data from over 15,000 people across 14 European Countries and 4 other non-European countries/regions (Hong Kong, Canada, Australia and California).

Respondents were asked to recall their blue space experiences between the ages of 0-16 years including how local they were, how often they visited them, and how comfortable their parents/guardians were with them playing in these settings, as well as more recent contact with green and blue spaces over the last four weeks, and mental health over the last two weeks.

The research, published in the Journal of Environmental Psychology, found that individuals who recalled more childhood blue space experiences tended to place greater intrinsic value on natural settings in general, and to visit them more often as adults – each of which, in turn, were associated with better mental wellbeing in adulthood.

Valeria Vitale, Lead author and PhD Candidate at Sapienza University of Rome, said: “In the context of an increasingly technological and industrialized world, it’s important to understand how childhood nature experiences relate to wellbeing in later life.

“Our findings suggest that building familiarity and confidence in and around blue spaces during childhood may stimulate an inherent joy of nature and encourage people to seek out recreational nature experiences, with beneficial consequences for adult mental health.” 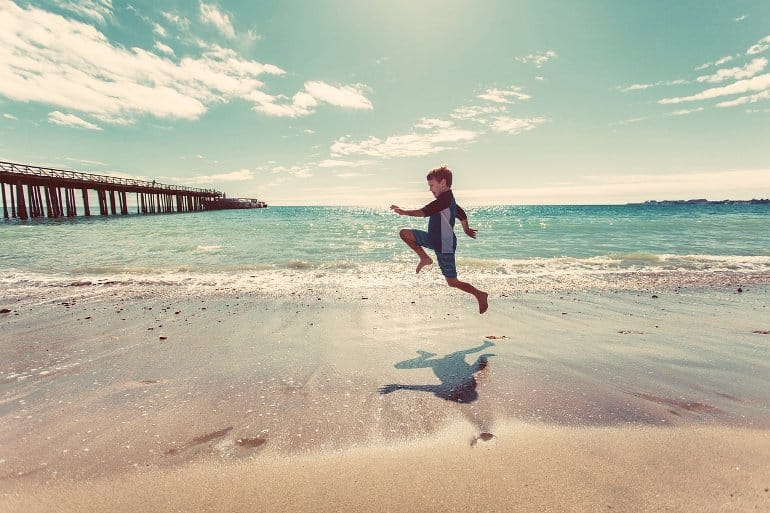 However, we know far less about the benefits of blue spaces, or the role childhood contact has in these relationships in later life. Image is in the public domain

Dr Leanne Martin, Co-author and Postdoctoral Research Associate at the University of Exeter’s European Centre for Environment and Human Health, said: “Water settings can be dangerous for children, and parents are right to be cautious. This research suggests though that supporting children to feel comfortable in these settings and developing skills such as swimming at an early age can have previously unrecognised life-long benefits.”

Dr Mathew White, Co-author and Senior Scientist at the University of Vienna, said: “The current study is adding to our growing awareness of the need for urban planners and local bodies responsible for managing our green and blue spaces to provide safe, accessible access to natural settings for the healthy mental and physical development of our children.

“If our findings are supported by longitudinal research that tracks people’s exposures over the entire life-course, it would suggest that further work, policies and initiatives encouraging more blue space experiences during childhood may be a viable way to support the mental health of future generations.”

The study is entitled ‘Mechanisms underlying childhood exposure to blue spaces and adult subjective well-being: An 18-country analysis’ and published in the Journal of Environmental Psychology.

Funding: The project was funded by the European Union’s Horizon 2020 research and innovation programme under Grant Agreement No. 66773.

Contact with natural environments is associated with good health and well-being. Although childhood nature experiences may be important in the development of an individual’s relationship with nature and subsequent well-being, previous studies have tended to focus on ‘nature’ in general, and the mechanisms by which childhood experiences influence well-being in adulthood remain insufficiently studied.

Drawing on cross-sectional survey data from an 18-country sample (N = 15,743) the current work extended previous research by examining: a) blue spaces (coasts, rivers, lakes, etc.) in particular; b) associations between adults’ recalled childhood exposure to blue spaces, frequency of recent visits to green and blues spaces, and adult subjective well-being; c) the role of childhood exposure to blue spaces on intrinsic motivations to spend time in nature; and d) the consistency of these relationships across different countries.

Tests of a model where childhood exposure to blue spaces was linked to adult subjective well-being serially through intrinsic motivation and then recent blue and green space visits exhibited a good fit, a pattern largely consistent across all 18 countries. However, an alternative model where recent visits predicted intrinsic motivation also demonstrated good fit, indicating that these processes may be iterative.

Building familiarity with and confidence in and around blue spaces in childhood may stimulate a joy of, and greater propensity to spend recreational time in, nature in adulthood, with positive consequences for adult subjective well-being.