Neurodegenerative disorders such as Alzheimer’s and Parkinson’s disease are associated with atypical proteins that form tangles in the brain, killing neurons. Neurobiologists at EPFL have now identified some key mechanisms underlying the formation of these tangles.

The researchers were also able to look at cell vulnerability early on in neurodegeneration, when neurons get disconnected from each other. Their work may help to develop new therapies for neurodegenerative diseases.

“If we can stop or slow down the earliest disconnection of neurons, we may slow down the subsequent steps that happen as neurons start to degenerate,” says study senior author Brian McCabe, director of the Laboratory of Neural Genetics and Disease and a Professor at the EPFL School of Life Sciences.

McCabe’s team engineered Drosophila (fruit fly) adults to express human Tau, a protein that is involved in Alzheimer’s disease and other disorders that lead to dementia.

Flies expressing human Tau had a shorter lifespan than controls, the researchers found. To assess the effect of human Tau on the brain, the team used a series of genetic, microscopy and computational technologies that allowed accurate imaging of individual neurons. The study is among the first of its kind to look at neurodegeneration at the single-neuron level in the context of an adult brain. 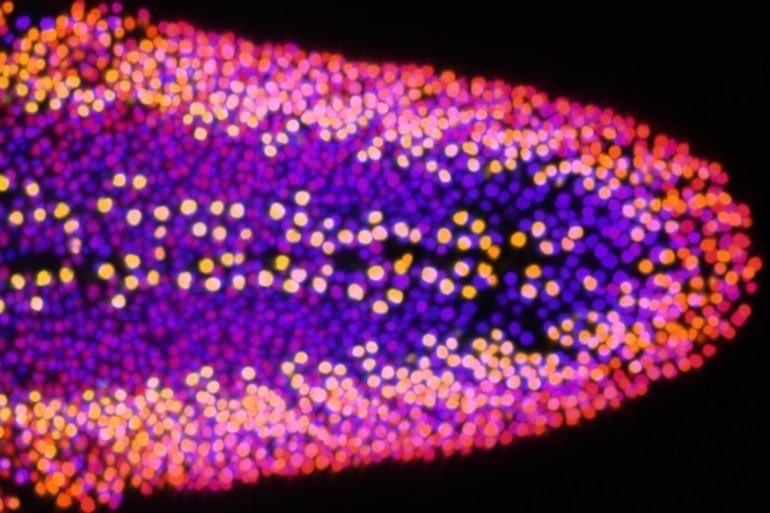 Compared to controls, flies expressing human Tau showed a substantial loss of synapses, or the connections between neurons. In these animals, the neurons’ axons — the long, thin parts of the cell that conduct electrical impulses — also shrank and retracted.

“By the time the axon was retracted, the neurons were no longer part of a functional circuit,” McCabe says. “We need to intervene in these very early stages, because when neurons are dying, the battle is already lost.”

Further experiments showed that the loss of a complex of proteins called the retromer, which can be mutated in people with Parkinson’s, accelerates neurodegeneration. In the cell, the retromer acts like a recycling system, rescuing proteins from being broken down and trafficking them back to the cell’s surface. Blocking the activity of the retromer complex resulted in increased levels of a shortened form of Tau that exacerbates neurotoxicity, the researchers found.

McCabe and his colleagues hypothesized that when retromer activity is reduced, Tau proteins linger for longer inside the cell, where they get ‘trimmed’ by specialized enzymes called caspases. Indeed, inhibiting the production of the shortened form of Tau could stall the loss of synapses and axons.

The findings, which were published in Nature Communications on 27 August, suggest that dampening retromer activity slows down the trafficking of Tau. This ‘traffic jam’ allows caspases to cut Tau into the shorter form that can damage neurons. Identifying drugs that enhance the trafficking of Tau might help reduce neurotoxicity, McCabe says.

If the shortened form of Tau is a diagnostic marker for brains affected by Alzheimer’s and Parkinson’s disease, the levels of this atypical protein could be used in drug screening as a proxy for drug efficacy.

McCabe’s team continues working towards understanding the earliest steps in neurodegeneration — an approach that could help to shed light on key mechanisms that trigger disease.

Alteration of the levels, localization or post-translational processing of the microtubule associated protein Tau is associated with many neurodegenerative disorders.

Here we develop adult-onset models for human Tau (hTau) toxicity in Drosophila that enable age-dependent quantitative measurement of central nervous system synapse loss and axonal degeneration, in addition to effects upon lifespan, to facilitate evaluation of factors that may contribute to Tau-dependent neurodegeneration.

Using these models, we interrogate the interaction of hTau with the retromer complex, an evolutionarily conserved cargo-sorting protein assembly, whose reduced activity has been associated with both Parkinson’s and late onset Alzheimer’s disease.

We reveal that reduction of retromer activity induces a potent enhancement of hTau toxicity upon synapse loss, axon retraction and lifespan through a specific increase in the production of a C-terminal truncated isoform of hTau.

Our data establish a molecular and subcellular mechanism necessary and sufficient for the depletion of retromer activity to exacerbate Tau-dependent neurodegeneration.