Summary: Images of food stimulate a newly discovered population of food-responsive neurons in the ventral visual stream. Researchers believe there may be an evolutionary reason for this neural population that may reflect the significance of food in human culture.

A gooey slice of pizza. A pile of crispy French fries. Ice cream dripping down a cone on a hot summer day. When you look at any of these foods, a specialized part of your visual cortex lights up, according to a new study from MIT neuroscientists.

This newly discovered population of food-responsive neurons is located in the ventral visual stream, alongside populations that respond specifically to faces, bodies, places, and words. The unexpected finding may reflect the special significance of food in human culture, the researchers say.

“Food is central to human social interactions and cultural practices. It’s not just sustenance,” says Nancy Kanwisher, the Walter A. Rosenblith Professor of Cognitive Neuroscience and a member of MIT’s McGovern Institute for Brain Research and Center for Brains, Minds, and Machines. “Food is core to so many elements of our cultural identity, religious practice, and social interactions, and many other things that humans do.”

The findings, based on an analysis of a large public database of human brain responses to a set of 10,000 images, raise many additional questions about how and why this neural population develops. In future studies, the researchers hope to explore how people’s responses to certain foods might differ depending on their likes and dislikes, or their familiarity with certain types of food.

MIT postdoc Meenakshi Khosla is the lead author of the paper, along with MIT research scientist N. Apurva Ratan Murty. The study appears today in the journal Current Biology.

More than 20 years ago, while studying the ventral visual stream, the part of the brain that recognizes objects, Kanwisher discovered cortical regions that respond selectively to faces. Later, she and other scientists discovered other regions that respond selectively to places, bodies, or words. Most of those areas were discovered when researchers specifically set out to look for them. However, that hypothesis-driven approach can limit what you end up finding, Kanwisher says.

“There could be other things that we might not think to look for,” she says. “And even when we find something, how do we know that that’s actually part of the basic dominant structure of that pathway, and not something we found just because we were looking for it?”

To try to uncover the fundamental structure of the ventral visual stream, Kanwisher and Khosla decided to analyze a large, publicly available dataset of full-brain functional magnetic resonance imaging (fMRI) responses from eight human subjects as they viewed thousands of images.

“We wanted to see when we apply a data-driven, hypothesis-free strategy, what kinds of selectivities pop up, and whether those are consistent with what had been discovered before. A second goal was to see if we could discover novel selectivities that either haven’t been hypothesized before, or that have remained hidden due to the lower spatial resolution of fMRI data,” Khosla says.

To do that, the researchers applied a mathematical method that allows them to discover neural populations that can’t be identified from traditional fMRI data. An fMRI image is made up of many voxels — three-dimensional units that represent a cube of brain tissue.

Each voxel contains hundreds of thousands of neurons, and if some of those neurons belong to smaller populations that respond to one type of visual input, their responses may be drowned out by other populations within the same voxel.

The new analytical method, which Kanwisher’s lab has previously used on fMRI data from the auditory cortex, can tease out responses of neural populations within each voxel of fMRI data.

Using this approach, the researchers found four populations that corresponded to previously identified clusters that respond to faces, places, bodies, and words. “That tells us that this method works, and it tells us that the things that we found before are not just obscure properties of that pathway, but major, dominant properties,” Kanwisher says.

Intriguingly, a fifth population also emerged, and this one appeared to be selective for images of food.

“We were first quite puzzled by this because food is not a visually homogenous category,” Khosla says. “Things like apples and corn and pasta all look so unlike each other, yet we found a single population that responds similarly to all these diverse food items.” 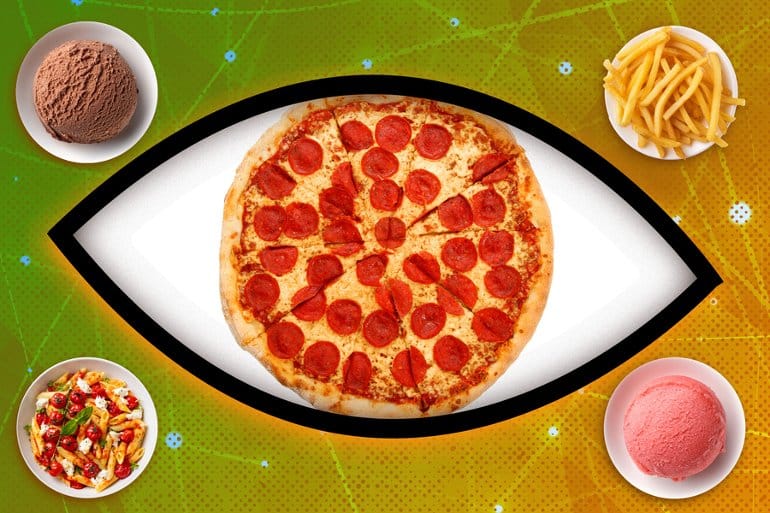 “The technique which the researchers used to identify category-sensitive cells or areas is impressive, and it recovered known category-sensitive systems, making the food category findings most impressive,” says Paul Rozin, a professor of psychology at the University of Pennsylvania, who was not involved in the study.

“I can’t imagine a way for the brain to reliably identify the diversity of foods based on sensory features. That makes this all the more fascinating, and likely to clue us in about something really new.”

The researchers also used the data to train a computational model of the VFC, based on previous models Murty had developed for the brain’s face and place recognition areas. This allowed the researchers to run additional experiments and predict the responses of the VFC. In one experiment, they fed the model matched images of food and non-food items that looked very similar — for example, a banana and a yellow crescent moon.

“Those matched stimuli have very similar visual properties, but the main attribute in which they differ is edible versus inedible,” Khosla says. “We could feed those arbitrary stimuli through the predictive model and see whether it would still respond more to food than non-food, without having to collect the fMRI data.”

They could also use the computational model to analyze much larger datasets, consisting of millions of images. Those simulations helped to confirm that the VFC is highly selective for images of food.

From their analysis of the human fMRI data, the researchers found that in some subjects, the VFC responded slightly more to processed foods such as pizza than unprocessed foods like apples. In the future they hope to explore how factors such as familiarity and like or dislike of a particular food might affect individuals’ responses to that food.

They also hope to study when and how this region becomes specialized during early childhood, and what other parts of the brain it communicates with. Another question is whether this food-selective population will be seen in other animals such as monkeys, who do not attach the cultural significance to food that humans do.

Funding: The research was funded by the National Institutes of Health, the National Eye Institute, and the National Science Foundation through the MIT Center for Brains, Minds, and Machines.