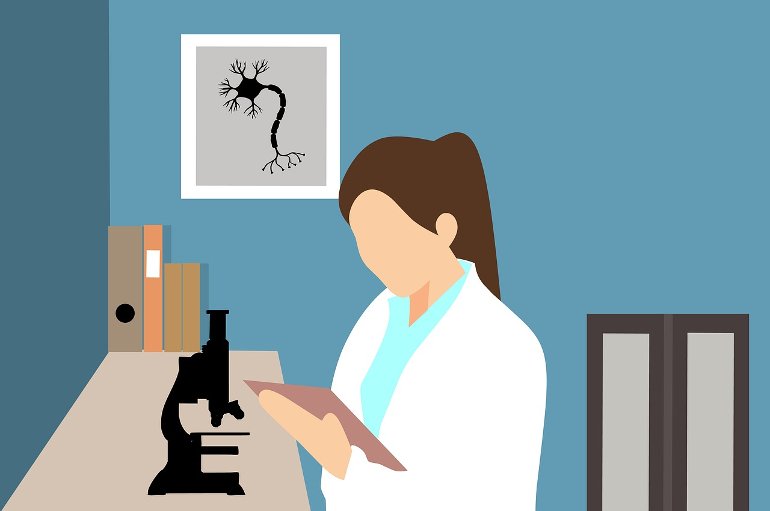 Summary: Overall, scientists and researchers are most innovative and creative early in their careers, a new study reports.

A new study provides the best evidence to date that scientists overall are most innovative and creative early in their careers.

Findings showed that, on one important measure, the impact of biomedical scientists’ published work drops by between one-half to two-thirds over the course of their careers.

“That’s a huge decline in impact,” said Bruce Weinberg, co-author of the study and professor of economics at The Ohio State University.

“We found that as they get older, the work of biomedical scientists was just not as innovative and impactful.”

But the reasons behind this trend of declining innovativeness make the findings more nuanced and show why it is still important to support scientists later in their careers, Weinberg said.

The study was published online Oct. 7, 2022 in the Journal of Human Resources.

Researchers have been studying the relationship between age or experience with innovativeness for nearly 150 years, but no consensus has emerged. Findings, in fact, have been “all over the map,” Weinberg said.

“For a topic that so many people with so many approaches have studied for so long, it is pretty remarkable that we still don’t have a conclusive answer.”

One advantage of this study is that the authors had a huge dataset to work with – 5.6 million biomedical science articles published over a 30-year period, from 1980 to 2009, and compiled by MEDLINE. These data include detailed information on the authors.

This new study measured the innovativeness of the articles by biomedical scientists using a standard method – the number of times other scientists mention (or “cite”) a study in their own work.  The more times a study is cited, the more important it is thought to be.

With detailed information on the authors of each paper, the researchers in this study were able to compare how often scientists’ work was cited early in their careers compared to later in their careers.

As they analyzed the data, Weinberg and his colleagues made a discovery that was a key to understanding how innovation changes over a career.

They found that scientists who were the least innovative early in their careers tended to drop out of the field and quit publishing new research. It was the most productive, the most important young scholars who were continuing to produce research 20 or 30 years later.

“Early in their careers, scientists show a wide range of innovativeness.  But over time, we see selective attrition of the people who are less innovative,” Weinberg said.

“So when you look at all biomedical scientists as a group, it doesn’t look like innovation is declining over time. But the fact that the least innovative researchers are dropping out when they are relatively young disguises the fact that, for any one person, innovativeness tends to decline over their career.”

Results showed that for the average researcher, a scientific article they published late in their career was cited one-half to two-thirds less often than an article published early in their careers.

But it wasn’t just citation counts that suggest researchers were less innovative later in their career.

“We constructed additional metrics that captured the breadth of an article’s impact based on the range of fields that cite it, whether the article is employing the best and latest ideas, citing the best and latest research, and whether the article is drawing from multiple disciplines,” said Huifeng Yu, a co-author, who worked on the study as a PhD student at the University at Albany, SUNY.

“These other metrics also lead to the same conclusion about declining innovativeness.”

They found that scientists who were the least innovative early in their careers tended to drop out of the field and quit publishing new research. Image is in the public domain

The findings showing selective attrition among less-innovative scientists can help explain why previous studies have had such conflicting results, Weinberg said.

Studies using Nobel Laureates and other eminent researchers, for whom attrition is relatively small, tend to find earlier peak ages for innovation. In contrast, studies using broader cross-sections of scientists don’t normally find an early peak in creativity, because they don’t account for the attrition.

Weinberg noted that attrition in the scientific community may not relate only to innovativeness. Scientists who are women or from underrepresented minorities may not have had the opportunities they needed to succeed, although this study can’t quantify that effect.

“Those scientists who succeeded probably did so through a combination of talent, luck, personal background and prior training,” he said.

The findings suggest that organizations that fund scientists have to maintain a delicate balance between supporting youth and experience.

“Young scientists tend to be at their peak of creativity, but there is also a big mix with some being much more innovative than others.  You may not be supporting the very best researchers,” said Gerald Marschke, a co-author of the study and associate professor of economics at the University at Albany,

“With older, more experienced scientists, you are getting the ones who have stood the test of time, but who on average are not at their best anymore.”

Other co-authors on the study were Matthew Ross of New York University and Joseph Staudt of the U.S. Census Bureau.

Funding: The research was supported by the National Institute on Aging, the Office of Behavioral and Social Science Research, the National Science Foundation, the Ewing Marion Kauffman and Alfred P. Sloan foundations, and the National Bureau of Economic Research.

Publish or Perish: Selective Attrition as a Unifying Explanation for Patterns in Innovation over the Career

Studying 5.6 million biomedical science articles published over three decades, we reconcile conflicts in a longstanding interdisciplinary literature on scientists’ life-cycle productivity by controlling for selective attrition and distinguishing between research quantity and quality.

While research quality declines monotonically over the career, this decline is easily overlooked because higher “ability” authors have longer publishing careers.

Our results have implications for broader questions of human capital accumulation over the career and federal research policies that shift funding to early-career researchers – while funding researchers at their most creative, these policies must be undertaken carefully because young researchers are less “able” on average.