Summary: Opioid withdrawal cuts off the supply of serotonin to the nucleus accumbens, dramatically reducing sociability in mice and increasing social aversion.

The acute physical illness characterizing opioid withdrawal is tough enough to endure even with full family, community, and medical support—so it is a brutal and sometimes deadly irony that one of withdrawal’s salient symptoms is extreme social aversion.

“Self-isolation can cause addicted people to drop out of recovery programs, to get into conflicts, and to pull away from family and other social support networks that could help them to remain abstinent,” says Stanford psychiatry professor Keith Humphreys, Ph.D., an international expert on addiction treatment and public policy.

New research by the lab of Stanford neuroscientist Robert Malenka, MD, Ph.D. has identified a key molecular link between opioid withdrawal and social aversion in the brains of mice—suggesting the potential to help people in recovery from opioid addiction reconnect with their social support networks.

The study points to a key role for the neuromodulator serotonin in switching sociability on and off. Normally, Malenka says, sociability depends on release of serotonin in an area deep in the brain called the nucleus accumbens, which generally plays a key role in linking behaviors to motivation and reward.

In their new study, published October 5, 2022, in the journal Neuron, the researchers discovered how opioid withdrawal cuts off the supply of serotonin to this region, dramatically reducing sociability.

Malenka’s team conducted the study on a mouse model of opioid withdrawal. The researchers gave escalating doses of morphine to the mice until the rodents were addicted and then abruptly cut off the drug. They then tested the mice for sociability.

“We measured how much time a mouse wants to spend hanging out with a little buddy. It’s really that simple,” says Malenka, the Nancy Pritzker Professor of psychiatry and behavioral sciences and deputy director of the Wu Tsai Neurosciences Institute.

“During protracted withdrawal from opioids, every single mouse in the study had severe sociability deficits.”

Restoring serotonin release largely restored typical levels of rodent sociability. A year later, they found that big boosts of serotonin in the same brain region “explains the intense pro-social effects of MDMA,” Malenka says. “We suspect the same thing is going on in humans.”

These earlier studies led Malenka and his colleagues to wonder if something similar was occurring during withdrawal from opioids. “Perhaps, like the autism mouse model, subjects aren’t getting the normal release of serotonin that is required for a pro-social, adaptive, non-aggressive interaction—so they become socially avoidant and cranky,” he says.

Malenka lab postdoctoral scholar Matthew Pomrenze, who led the team’s newly published study, made the connection that a particular type of opioid receptor molecule is known to reduce serotonin release within the nucleus accumbens. This receptor subtype, called a kappa receptor, had been linked to stress, depression and asocial behavior, but exactly how it influenced sociability was unknown.

Pomrenze and colleagues performed detailed experiments which revealed that during opioid withdrawal, a neuropeptide molecule called dynorphin is released in the nucleus accumbens, where it activates kappa receptors and blocks serotonin release.

“We thought maybe this is what is causing the asocial behavior we see in withdrawal,” Malenka says. “So, we asked—if we gave the animals a drug that blocks this kappa receptor and restores serotonin release, could it also restore normal levels of sociability?”

To make the experiment more clinically relevant, Malenka’s team used a kappa receptor blocker called aticaprant, which is already being tested for the treatment of certain subtypes of depression in humans. When Malenka’s team gave the drug to their withdrawn, addicted mice, “it completely reversed their sociability deficits,” says Malenka. 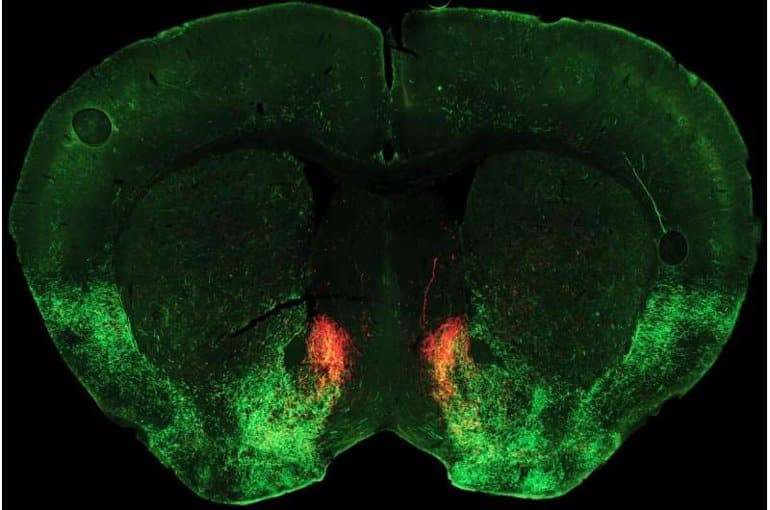 Achieving something similar for humans could have a profound impact on the opioid epidemic, says Humphreys, who co-directs the NeuroChoice Initiative with Malenka and psychology professor Brian Knutsen, but was not involved in the current study.

If opioid-addicted people going through withdrawal turned toward sources of support rather than away from them, many more might successfully weather the discomforts of withdrawal and reach recovery with the help of friends, family, their doctors, and programs, he says.

“Withdrawal is often the time when a doctor says, ‘You don’t have to live like this. We have excellent treatments that I’d be happy to connect you to.’ Or when someone the addicted person knows says, ‘I was addicted to heroin for 10 years, and I’m not using anymore. I’d be happy to take you to my Narcotics Anonymous meeting.’ But if the person in withdrawal is avoiding all social interactions, none of those potentially life-saving interventions can occur,” says Humphreys.

“This is exactly what NeuroChoice was designed to do,” says Humphreys. “To explore across levels, from the cell to the individual, to the group, to policy. And from animals to humans.”

But developing drugs to help with addiction is notoriously difficult, Malenka cautions. For one thing, pharmaceutical companies do not reap huge profits from such medications. “So, the goal of our type of work,” Malenka says, “is to convince those in the human clinical research world to say, “Hey, this is working really well in mice, I should try it in a clinical study.’”

The mechanism revealed by Malenka’s team’s study will give whoever may do that an excellent head start.

Social isolation during opioid withdrawal is a major contributor to the current opioid addiction crisis.

Blockade of release from dynorphin (Pdyn)-expressing dorsal raphe neurons (DRPdyn), but not from NAcPdyn neurons, prevents these deficits in prosocial behaviors.

These results define a neuromodulatory mechanism that is engaged during protracted opioid withdrawal to induce maladaptive deficits in prosocial behaviors, which in humans contribute to relapse.

U.S. power use to hit record in 2022 as economy grows, hotter weather -EIA