Summary: Effective neurochemical changes in the brain of those with social anxiety take different forms after SSRI treatment and cognitive behavioral therapy.

Neurochemical changes in the brain differ among patients with social anxiety treated using both SSRIs and CBT, compared to those treated using only CBT. While the combined treatment involving the medicine blocked the serotonin transporters, availability of such transporters increased in patients who only received CBT.

Treatment using selective serotonin reuptake inhibitors, or SSRIs, is effective for depression and anxiety and can be even more effective when combined with cognitive behavioral therapy, or CBT. However, it has not been established which mechanisms in the brain clarify the clinical improvement.

In a double-blind positron emission tomography (PET) study, researchers at Uppsala University investigated people with social anxiety and looked at how serotonin and dopamine transporters in the brain react when SSRIs and CBT are combined. 24 people participated in the study.

Half of the participants received both SSRI medication and CBT. The control group received CBT and placebo pills that had no effect.

Both groups were helped by undergoing treatment, but there were major differences in how the serotonin and dopamine systems changed in the brain. As expected, the SSRI combination had a major effect on the serotonin transporters. 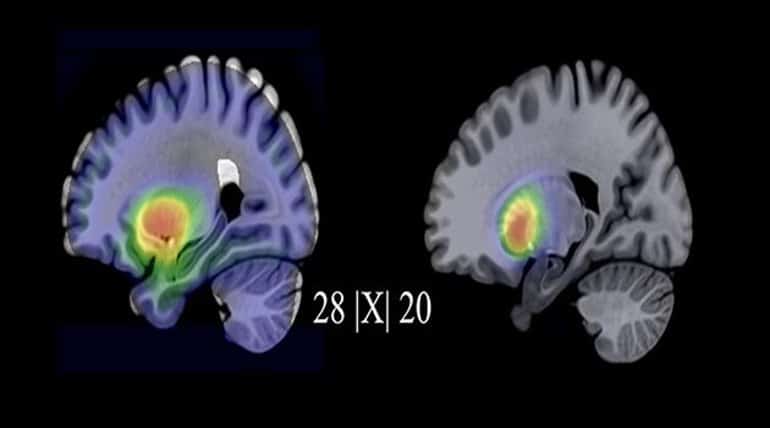 Around 80 percent of them were blocked by the SSRI medication, which is considered a prerequisite for it to function. However, the opposite was true after exclusively psychological treatment, with the serotonin transporters increasing in the raphe nuclei, for example, a group of nuclei contained in the brain stem.

Another striking aspect was that there were entirely different results concerning the link between dopamine and improvement in the two groups.

“For purely psychological treatment, that is, those who received CBT along with the placebo medication, there was a connection between increased availability of dopamine transporters and stronger improvement, but the opposite was the case for the SSRI combination,” explains Olof Hjorth, lead author of the study.

The researchers were also able to show that coexpression of the transporters, a measure of the serotoni-dopamine balance, was raised in several of the examined areas of the brain, which corresponded to the level of social anxiety that have been experienced by the patient. This high coexpression also had an impact on the effect of the treatment, except in opposing ways in the two groups.

The results indicate that effective neurochemical changes in the brain take different forms after SSRI treatment and CBT.

“Both pharmacological and psychological treatments work against social anxiety, but they affect the brain’s serotonin and dopamine systems in different ways. The hope is that this knowledge could lead to us finding better and more tailored treatments in the future for affected individuals,” notes professor Tomas Furmark, who led the research.

In this multi-tracer positron emission tomography (PET) study, 24 patients with SAD were randomized to treatment with escitalopram+ICBT or placebo+ICBT under double-blind conditions.

Before and after 9 weeks of treatment, patients were examined with positron emission tomography and the radioligands [11C]DASB and [11C]PE2I, probing the serotonin (SERT) and dopamine (DAT) transporter proteins respectively. Both treatment combinations resulted in significant improvement as measured by the Liebowitz Social Anxiety Scale (LSAS).

After treatment, average SERT occupancy in the SSRI + ICBT group was >80%, with positive associations between symptom improvement and occupancy in the nucleus accumbens, putamen and anterior cingulate cortex.

Following placebo+ICBT, SERT binding increased in the raphe nuclei. DAT binding increased in both groups in limbic and striatal areas, but relations with symptom improvement differed, being negative for SSRI + ICBT and positive for placebo + ICBT. Thus, serotonin-dopamine transporter co-expression exerts influence on symptom severity and remission rate in the treatment of social anxiety disorder.

However, the monoamine transporters are modulated in dissimilar ways when cognitive-behavioral treatment is given concomitantly with either SSRI-medication or pill placebo.

How to Become a Morning Person – Neuroscience News