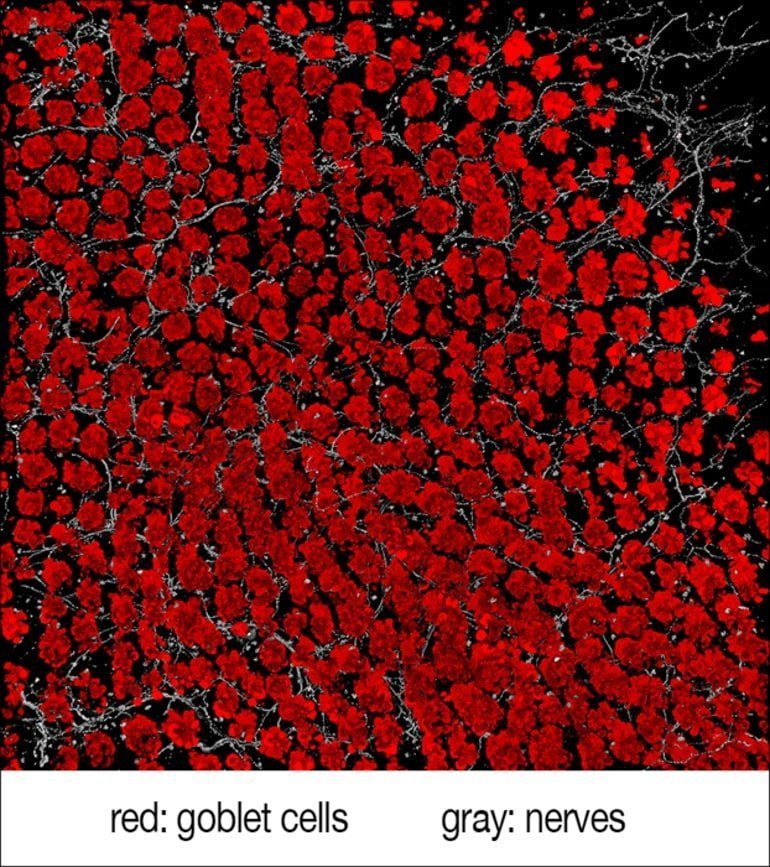 Pain has been long recognized as one of evolution’s most reliable tools to detect the presence of harm and signal that something is wrong — an alert system that tells us to pause and pay attention to our bodies.

A new study led by researchers at Harvard Medical School suggests that may well be the case in mice.

The research, published Oct. 14 in Cell, shows that pain neurons in the mouse gut regulate the presence of protective mucus under normal conditions and stimulate intestinal cells to release more mucus during states of inflammation.

The work details the steps of a complex signaling cascade, showing that pain neurons engage in direct crosstalk with mucus-containing gut cells, known as goblet cells.

“It turns out that pain may protect us in more direct ways than its classic job to detect potential harm and dispatch signals to the brain. Our work shows how pain-mediating nerves in the gut talk to nearby epithelial cells that line the intestines,” said study senior investigator Isaac Chiu, associate professor of immunobiology in the Blavatnik Institute at HMS. “This means that the nervous system has a major role in the gut beyond just giving us an unpleasant sensation and that it’s a key player in gut barrier maintenance and a protective mechanism during inflammation.”

Our intestines and airways are studded with goblet cells. Named for their cup-like appearance, goblet cells contain gel-like mucus made of proteins and sugars that acts as protective coating that shields the surface of organs from abrasion and damage.  The new research found that intestinal goblet cells release protective mucus when triggered by direct interaction with pain-sensing neurons in the gut.

In a set of experiments, the researchers observed that mice lacking pain neurons produced less protective mucus and experienced changes in their intestinal microbial composition — an imbalance in beneficial and harmful microbes known as dysbiosis.

To clarify just how this protective crosstalk occurs, the researchers analyzed the behavior of goblet cells in the presence and in the absence of pain neurons.

They found that the surfaces of goblet cells contain a type of receptor, called RAMP1, that ensures the cells can respond to adjacent pain neurons, which are activated by dietary and microbial signals, as well as mechanical pressure, chemical irritation or drastic changes in temperature.

The experiments further showed that these receptors connect with a chemical called CGRP, released by nearby pain neurons, when the neurons are stimulated. These RAMP1 receptors, the researchers found, are also present in both human and mouse goblet cells, thus rendering them responsive to pain signals.

Experiments further showed that the presence of certain gut microbes activated the release of CGRP to maintain gut homeostasis.

“This finding tells us that these nerves are triggered not only by acute inflammation, but also at baseline,” Chiu said. “Just having regular gut microbes around appears to tickle the nerves and causes the goblet cells to release mucus.”

By contrast, mice lacking either pain neurons or goblet cell receptors for CGRP were more susceptible to colitis, a form of gut inflammation. The finding could explain why people with gut dysbiosis may be more prone to colitis.

When researchers gave pain-signaling CGRP to animals lacking pain neurons, the mice experienced rapid improvement in mucus production. The treatment protected mice against colitis even in the absence of pain neurons.

The finding demonstrates that CGRP is a key instigator of the signaling cascade that leads to the secretion of protective mucus.

“Pain is a common symptom of chronic inflammatory conditions of the gut, such as colitis, but our study shows that acute pain plays a direct protective role as well,” said study first author Daping Yang, a postdoctoral researcher in the Chiu Lab.

A possible downside to suppressing pain

The team’s experiments showed that mice lacking pain receptors also had worse damage from colitis when it occurred.

Given that pain medications are often used to treat patients with colitis, it may be important to consider the possible detrimental consequences of blocking pain, the researchers said.

“In people with inflammation of the gut, one of the major symptoms is pain, so you might think that we’d want to treat and block the pain to alleviate suffering,” Chiu said. “But some part of this pain signal could be directly protective as a neural reflex, which raises important questions about how to carefully manage pain in a way that does not lead to other harms.”

Additionally, a class of common migraine medications that suppress the secretion of CGRP may damage gut barrier tissues by interfering with this protective pain signaling, the researchers said.

Harvard Medical School researchers have analyzed the molecular crosstalk between pain fibers in the gut and goblet cells that line the walls of the intestine. The work shows that chemical signals from pain neurons induce goblet cells to release protective mucus that coats the gut and shields it from damage. The findings show that intestinal pain is not a mere detection-and-signaling system, but plays a direct protective role in the gut. Credit: Chiu Lab/Harvard Medical School

“Given that CGRP is a mediator of goblet cell function and mucus production, if we are chronically blocking this protective mechanism in people with migraine and if they are taking these medications long-term, what happens?” Chiu said. “Are the drugs going to interfere with the mucosal lining and people’s microbiomes?”

Goblet cells have multiple other functions in the gut. They provide a passage for antigens — proteins found on viruses and bacteria that initiate a protective immune response by the body — and they produce antimicrobial chemicals that protect the gut from pathogens.

“One question that arises from our current work is whether pain fibers also regulate these other functions of goblet cells,” Yang said.

Another line of inquiry, Yang added, would be to explore disruptions in the CGRP signaling pathway and determine whether malfunctions are at play in patients with genetic predisposition to inflammatory bowel disease.

The work was supported by the National Institutes of Health (grants R01DK127257, R35GM142683, P30DK034854, and T32DK007447); the Food Allergy Science Initiative; the Kenneth Rainin Foundation; and the Digestive Diseases Research Core Center under grant P30 DK42086 at the University of Chicago.

Jacobson is an employee of Genentech Inc.; Chiu serves on scientific advisory boards of GSK Pharmaceuticals and Limm Therapeutics. His lab receives research support from Moderna Inc. and Abbvie/Allergan Pharmaceuticals.

Neuroepithelial crosstalk is critical for gut physiology. However, the mechanisms by which sensory neurons communicate with epithelial cells to mediate gut barrier protection at homeostasis and during inflammation are not well understood.